do you have issue with vlan on a MR33 Cisco ?

i was not able to create a vlan for a radio. (never receive packet)

hope one day will have a new driver that support vlan

is there any news on this problem ?

hope we can get acces to vlan function.

Hi,
I moved my meraki mr33 to openwrt few days ago and i've also an issue with vlan.
I'm not able to setup vlan ( even on ethernet interface ).

I plugged a PC with wireshark on eth0 and the AP doesn't seem to tag packets ...

Any clue to debug this issue ?

I’m no expert with OpenWRT but I’ve recently setup a Linksys WRT32X as my core router and I have now added a Meraki MR33 with the latest snapshot of OpenWRT on it.
I want to use the Meraki to present the same SSIDs as my WRT32X to extend my Wifi coverage. Some of the SSIDs are private and need to be on VLANs which trunk them from the WRT32X (like one of my guests and one for IoT devices). For the life of me I cannot get the MR33 to work with the VLANs, and having read more, I think it may be to do with its inability to tag packets with VLAN IDs etc. The MR33 wireless networks residing on the management VLAN work just fine, but any on VLANs 2, 3, 4 etc. do not work, in fact the subnets do not pick up DHCP etc. I really don’t think the MR33 is working with the tags properly. The WRT32X has a VLAN capable switch, but the MR33 only has the software VLAN capability but it should technically still work with sub-interfaces.
Does this sound like an OpenWRT driver issue for the MR33 or is it just my ineptitude?
Would the DSA driver will fix the issue?
https://git.openwrt.org/?p=openwrt/staging/chunkeey.git;a=commit;h=408bfbb35a4327f572bd466340022b42301204a3
I'm not sure how this would be installed so advice appreciated.

There is also a similar problem in the latest release, but I managed it in difrent way with two bridge not one 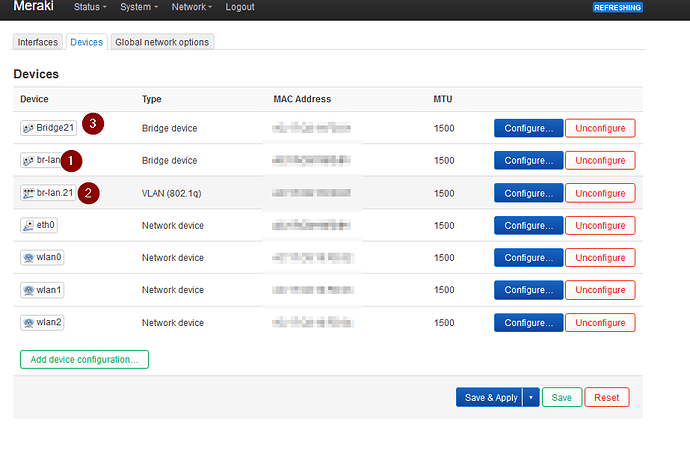 The below interface is connected to bridge21, after indicating it in the wireless network tab, the network starts working in the proper Vlan