You didn't specify the vpn speed.

I've been recommending the CR15ING/CR15WING/CR25ING/CR25WING/CR35ING recently.

They're cheap, and gigabit capable.

VPN speed does not have to be high. Say 20 Mbps.

I am confused by the products CR15ING/CR15WING/CR25ING/CR25WING/CR35ING. They seem to be firewall devices, not generic mini pc ?

Recently, I did several OpenWrt installs on Cyberoam CR15wiNG and CR25wiNG devices, so I thought I'd publish my notes here. Both of these models include wireless networking. Both have matching wired-only sister models, CR15iNG and CR25iNG respectively, so I expect the installation process for those should be nearly identical, but shorter (no need to configure wireless networking). This HOWTO is intended for the relatively new users who have some experience with general computing and system admi…

Impressive hardware specs for such a tiny stuff

Ah, thanks for the HOWTO. I am not familiar with these devices, but if we can install openwrt on it, I don't see any issue.

I am not familiar with these devices, but if we can install openwrt on it, I don't see any issue.

Since @frollic invoked my humble efforts, I'll be a pest and throw in a couple more in the same vein in the interest of shameless self-promotion:

You can see that these guides all pertain to x86 devices and thus have a lot in common.

x86 (both modern and ancient) is a great platform for running OpenWrt, but it requires some work, since there is a wide variety of hardware that can be present on an x86 unit, and OpenWrt, being first and foremost a compact system, needs some human help in figuring out what it has at its disposal and how to use it...

Keep in mind, however, that x86 also tends to be more power-hungry compared to, say, ARM.

Also keep in mind that similarly looking devices sometimes have radically different innards. For example, one of the guides referenced above is about a Sophos device. Sophos has several product lines. The XG and SG devices are x86-based, so OpenWrt can be installed and configured without a hitch. The RED line, meanwhile, is built on Freescale CPUs, which is not a supported OpenWrt platform (not yet anyway).

If you're curious about a specific device, ask (but please try Googling first; it's entirely possible that Google has heard about interests similar to yours already).

Keep in mind, however, that x86 also tends to be more power-hungry compared to, say, ARM.

This is not necessarily true, a well selected x86_64 device will draw somewhere between 5 and 12 watts - modern high-end ARMv7/ ARMv8 based wireless routers easily need twice that much (not all!). Admittedly, the need to run a dedicated AP (and maybe a switch) in addition to the router itself might push the aggregate power requirements beyond that of a single all-in-one device, but many users with advanced requirements (more than 4+1 ethernet ports or multiple APs to cover the whole house) will need those anyways.

VPN speed does not have to be high. Say 20 Mbps.

Funny as it is, this is exactly the spec number for Cisco Meraki MX60 with stock firmware: 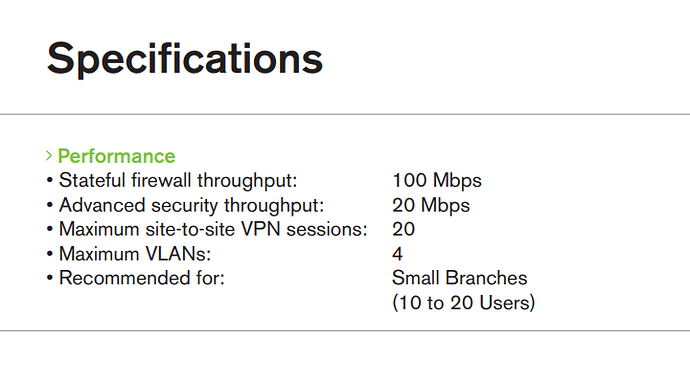 The MX60 passed its end of support in October, so companies that had those units are purging them left and right, and they are available very inexpensively. And, believe it or not, there's a guide for that, too:

The downside is, the installation process is quite a bit more involved; you will need to open the case, use a special kind of cable called UART, and set up a TFTP server.

in the interest of shameless self-promotion

This is not necessarily true

I agree, hence, the "tends to" in the post you're quoting. There's an untold number of old x86 devices out there though. I don't measure power consumption, but I do pay attention to power requirements as a rough indicator of peak power consumption (emphasis on peak and rough). I realize that peak and typical are related only loosely, but they are related nonetheless.

simple client of a wifi network... it makes no sense to do it with a router....with extra capabilities (mainly radios)..

Don't you need a device with a radio to be a WiFi client?

...feel I should be able to buy a very simple hardware that is like a router without radios

A NanoPi R2S (get the machined metal case it comes with to keep the CPU temp down) ordered direct from Friendly Elec is, I think, what you may be looking for: inexpensive, very low power draw, well supported by OpenWrt, decent memory (1GB), uses an SD flash for the OS (so you aren't going to run out of space there), enough CPU (4 Arm A53 cores at 1.2 GHz) to be a VPN server (~300 Mbps Wireguard), CPU is capable of hardware encryption if OpenVPN is a possibility (OpenWrt support looks like it will arrive soon for hardware encryption).

Finally, if you need a client radio after all, you can plug a WiFi dongle into its USB port. I've not done the latter yet though, so I can't comment beyond Friendly Elec advertises that is an option.

At any rate, take a look at it and see what you think. I've been pretty impressed with the R2S when I test it out as my spare Gateway router.

Thanks for your thoughts.

Yes, you are correct, I do need radios to receive wifi. I guess my point was that I do not need to pay for radio that can emit good wifi. But maybe there is not really a significant difference in prices between a pc's radio and a router's radio.

i3-4150t is cheap and a way more powerfull than any "j" celerons
also memory is cheap, more of that it supprts ECC memory wich is outstand any other x86 based routers for 24/7/365 use

you'll be killing mosquitoes with a cannon.

because you can get a lot of fun doing that, money is a money, emotions are priceless) for ~400 usd you get a 10Gig businesses class hardware, no further upgrades, no reboots, no performance issues, just setup openwrt, press poweron button and forget

you forgot "very old* in that sentence ...

I would avoid a mini PC if you care about energy. Intel has gotten irresponsible with power consumption (not just 12th and 13th gen which are insanely power hungry) but their new N5000 series draw upwards of an absurd 20-30W.