Looking for a new router

Hello everyone, so, my budget is somewhere in the 100euro range, give or take 20-30 euros and I live in Romania. Currently I am using an Archer c7 v2 stock firmware and I want to hardwire another router for better coverage upstairs. Any recommendations? Would also be interested if you can make a mesh with openwrt if that is possible? Thanks

"Mesh" only makes sense if you have three or more devices, where there are alternate paths. A wireless extension can be done using WDS for most Qualcomm/Atheros-based routers running current OpenWrt.

Hardwired installs are far superior to wireless, if you can run the cable. Any "repeater" setup1 at least halves your available wireless bandwidth on the "remote" station.

Edit: If you were running more in the 500-700 Mbps range, I would have suggested the ipq40xx SoC, which I'll leave as a "budget" option. An ipq40xx-based all-in-one also would make a good AP if you upgrade to an x86_64-based router and managed switch in the future.

My recommendation would be to look at ipq40xx-based devices in that price range as your primary router and run the trustworthy, but slowly aging Archer C7v2 as the remote AP (after flashing current OpenWrt, ath79 build).

The Linksys EA6350(v3) has recently been available as low as £34 through Amazon UK and is running around US$75 through Amazon US. At the first price, it was a steal. I think it's a good value at US$75. The ZyXEL NBG6617 is no longer available in the US, but it and other options may be more available in your part of the world.

I run a "sister" of the EA6350 for most of my APs, but still have one of my five Archer C7v2 units up and running as well. The ipq40xx wireless is notably better than the older chip set in the Archer C7v2.

If you want do do anything but just route/NAT that speed (such as "SQM", bandwidth shaping, traffic prioritization), you probably need an x86_64-based router or might be able to get away with an mvebu-based device. x86_64-based routers (dual NICs required) and a managed switch are likely above €150, and don't include wireless.

1 On the same radio, which is the case for most all-in-one, wireless routers at this time.

So what would you suggest for me to do? All I want is strong wifi for downstairs and upstairs (mostly upstairs). Downstairs i have a PS4 wired and a TV wired. Upstairs I have 2 tablets, 2 phones and 1 TV (wireless). The TV mostly streams.

While GIGABIT RATES!!!!! sounds great, I don't know how I'd use a gigabit downstream with two people in the house accessing sites intended for consumers.

If you can get something like the EA6350(v3) at half your budget, I'd use that as your main router, run Ethernet cable down to the Archer C7v2 and be done for a few years. If you find that you have a meaningful reason to upgrade, you could then buy an x86_64 SBC or iTX with two NICs, a managed switch, plug in the two all-in-ones as APs, and not have "wasted" any money along the way.

Could you elaborate some more on the sbc/itx stuff and the aio APs? I'm a bit of a networking noob and you completely lost me :))

From the top, what does the manufacturer of an all-in-one router need?

The SoC (system on a chip) manufactures know this, and the designs reflect it.

From https://www.qualcomm.com/media/documents/files/ipq40x8-ipq40x9-product-brief.pdf as an example

Yep, that hits those benchmarks directly -- dedicate specialized parts for them 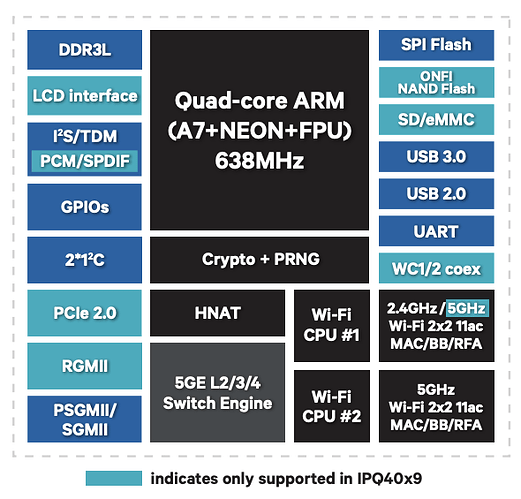 "HNAT" and "5GE L2/3/4 Switch Engine" -- offloads all the "normal" routing and NAT from the CPU. The packets don't use significant CPU power as that hardware handles the most of it. Manufacturers don't try to compete with the feature set that OpenWrt has for managing bandwidth, which require the CPU to accept the packet over one or two gigabit links between the CPU and the switch engine, look at it, make some decisions, then send it back.

OK, back to a world where you want to do something with the gigabit packet stream. Now you needs to get a gigabit into the CPU, and a gigabit out of the CPU, plus whatever upstream traffic is related to those flows and generated locally. So a single GigE connection isn't enough. You need two. Most x86_64 SBCs or motherboards don't have more than one, so you either need one with two, one with an open PCIe slot and a card, or maybe a good USB 3 dongle.

There basically aren't any cost-effective 802.11 cards that can work as an AP (access point). It's cheaper to buy an all-in-one and just use it for wireless. You'd connect it with an Ethernet cable to the switch and it would bridge its wireless over the Ethernet to the "main" router.

I've got an ODRIOD H2 on the bench right now. I'm in the early phases of testing it, but I believe that its Celeron J4105 CPU will have enough power to handle rates close to 1 Gbps through the CPU. I can't guarantee that, and my testing has been slowed down by a broken ankle in the house. It's got two, Realtek GigE interfaces. Not my favorite (Intel for GigE), but they seem to work reasonably well. I like the H2 as it is small, about a 12 cm cube with enough room for dual, mirrored SSDs inside, and as it is low power, idling under 10 W. There are similar iTX-format motherboards at similar prices, but they're much larger once in a case.

Managed switches let you "expand" the two ports on the SBC to any reasonable number you need, using VLANs.

So, conceptually you would:

An ODROID H2 "all up" is around US$200, plus whatever you want to spend on SSDs (US$20 for low end, US$40-50 each for 256 GB Crucial/Samsung each). Similar motherboards are around US$100, plus Ethernet card, plus memory, plus SSDs, plus case, plus power supply, plus little stuff, so probably around the same price. iTX is 17 cm square, so you're probably looking at a much larger box once in a case (22 x 19 x 35 cm is one of the tiny ones), especially as most cater to "gamers" who want to install a huge graphics card and big power supply.

A used, Cisco SG300-24 (24-port) switch is around US$100-150. The SG300-10 isn't significantly less expensive. I have read that the ZyXEL upper-range managed switches are comparable in price new, and work well.

So it's quite an investment in addition to that second AP.

That's why I'd personally just go with a solid, upper-range device and see how it goes.