Status quo: For my access point, up until now I made due with a Netgear R6220 (MT7621ST) that has been decommissioned from router duty and now exclusively does wifi and nothing else. It works fine as it is, but it doesn't seem to have the horsepower to saturate an 802.11ac wifi connection, topping out its single core's two threads at ~310 to 320 mbit actual throughput (observed via htop on the R6220, main routing is done by an X86 device so that's certainly not the bottleneck.)

I have no particular interest in an AX AP (mainly because OpenWrt-supported devices are still few and far between) but I would like an access point that can put out what AC wifi promises.

I am distinctly not asking for specific device recommendations, I would probably seek out one that fits the bill myself. Rather I would appreciate real-world experience with the actual architectures/chipsets and how well they perform with OpenWrt. From which combination can I expect the ~600 mbit a 2x2 AC network is supposed to be able to provide?

I.e., would a MT7621AT with twice the cores/threads be able to perform significantly better? Should I look into a significantly more powerful chipset (IPQ?), how well do the Qualcomm chipsets stack up? (Or, dare I ask, is there some magic bullet that would make the R6220 perform any better?)

I do recall hitting around 400 Mbps with an Intel 8260AC client and some MediaTek 802.11ac hardware a while back. Wireless being half duplex, that's about the max you would be able to get from a 2x2 866 Mbps link AFAIK? That was on an MT7621AT device (I have no singlecore MT7621 devices so I cannot compare).

What's the client you are using? Line of sight between client and AP? Anything in between that might interfere (brick walls, concrete, metal, ...)?

Thanks for your answers, guys. I must admit that while I know my way around other aspects of OpenWrt rather well, Wifi is still something of a blind spot for me.

The R6220 with can not even do those 350-400 you mention. best-case ~400 Mbps still sound a lot better than the roughly 300 I'm currently getting, and I'm pretty sure that limit is imposed by the CPU, what with the router in the same room with no walls.

So I will have to look into AX. The TOH for AX devices isn't exactly overwhelming in the number of devices. Maybe that TP-Link EAP615 would be worth a shot, the Xiaomi's look like a royal PITA to get OpenWrt installed, and the Linksys/Belkin is not available for realistic prices in Germany.

I would assume so, yes - but 160 MHz channels in the 5 GHz band aren't that realistic (6 GHz would be another topic).

I'm seeing about 300mbit using my phone (Snapdragon 870) in both directions using a Totolink A8000RU which is using quite a bit beefier SoC than your MT7621ST so I'd say that's about what you get using MT7615N / Mediatek 11ac hardware. I think my 11ac Linksys hardware (MR8300/EA6350v3) were a bit faster but range is much worse.

Thanks for confirming it with your numbers. Again, I didn't know much about wifi. But it's utterly disappointing to see a wifi connection that advertises itself -- not even in the marketing but both on the AP and the clients themselves -- as "866.7 Mbit/s" delivering less than half of that.

This thread was quick but efficient in putting my head straight. I think I will give up on "making 802.11ac better", AX seems the way to go. All my charts for comparing Ubiquiti’s models of UniFi Routers, Wireless Access Points, and Switches.

This is specific to Unifi's products but breaks down all their varients and shows if they 2x2 or more and max speeds.

More aerials means more clients and better speeds but you also have to consider channels available to them. You can do 40mhz channels with 2.4G but your neighbours will hate you and noise will be an issue.

Also another tip? use separate ssid's for 2.4 and 5g. my laptop would drop to the slower but stronger 2.4g otherwise even thou the weaker signal but faster speed 5G was better.

All good advice, thank you.

I'll do you one better: Seeing as the only clients that actually need 2.4 GHz wifi are my IOT devices that are caged into their own segregated network anyway, I separate my wifi physically between two auxiliary networks (one for IOT, one for guests) on 2.4GHz at 20 MHz and my "main" network on 5GHz @ 80 MHz.

For the next few months I will still live in a small apartment in the noisy city center, with some 30-ish neighbor networks 2.4GHz is borderline unusable for anything but the slowest devices, but those seem to do fine. For my main devices I have no problem with 5GHz coverage and surprisingly few neighbor networks.

FWIW, the site you're linking to doesn't seem to discern between Mbps and MBps, nor does it care about the factor 8 difference between them. That doesn't really instill confidence. Wireless is half duplex, and the advertised speeds are link layer, so they include the (considerable) overhead WiFi has.

That being said, I recently upgraded from an EAP235 to an EAP615 and I'm very happy with it. It's consistently hitting 400+ Mbps, which is clearly underwhelming with an advertised 1200 Mbps link layer

Either way, both devices are MT7621AT.

Don't know how accurate speedtest is, but this is my cell phone 3m from one of my Archer C2600 APs. 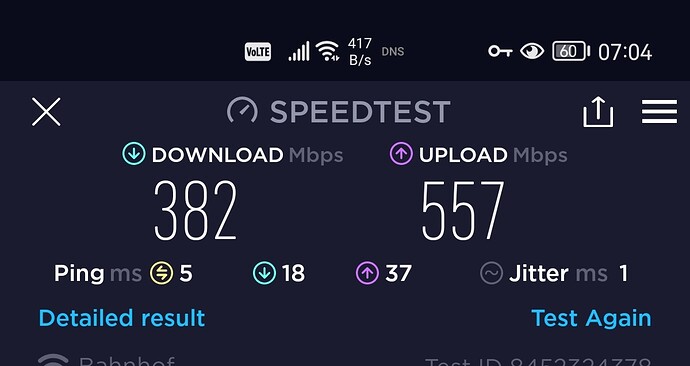 I think I start to get the picture. It's not incredibly far off the mark but the MT7621ST doesn't have the horsepower to completely fulfill the ~380-ish Mbit a 866 Mbit AC link layer could realistically fulfill and it leaves a few dozen Mbit on the table. A MT7621AT with the same wifi chipset could probably do it, and maybe even slightly more with a different wifi chipset or a 3x3 instead of a 2x2 configuration. but I'm starting to think that would not make the difference I would have hoped for and I'd be throwing good money after bad.

I know I said otherwise before but I changed my mind, I will go for AX after all. The Xiaomi AX3600 looks comically large but technically capable, I'll see if I can find a good deal on it, or maybe a similar device. I'm not in a hurry.

Thanks everyone, I really appreciate it.

If you're willing to help in the development of a openwrt firmware, the WAX206 APs might be worth looking into.

If you're willing to help in the development of a openwrt firmware, the WAX206 APs might be worth looking into.

I'm flattered, but I'm a frontend programmer, although I occasionally dip my toes into DTS files or uboot variables I'm patently useless when it comes to firmware development.

it's a known platform, I wouldn't expect much to be required to get it supported, but I'm pretty much in the same spot, DTS files excluded

Sending one to a dev would help

with my phone, at 10 meters, 1 brick wall between me and the router, i reach 600Mbps.
if this could help.
With the original firmware, i remember it was going higher, i guess because there is an hadware nat for the wifi, which is not present on openwrt.

How did you test that, iperf3 on the phone?

no a simple speedtest

That's quite unreliable unforunately, if you have an Android phone you can download https://play.google.com/store/apps/details?id=com.arubanetworks.arubautilities&hl=en&gl=US which comes with iperf3