Hello, I hope someone can help me regarding openwrt on a Linksys WRT32X router. I received this and absolutely can't get it off the part. No matter what I always try OpenWRT. Could someone possibly help me?

My guess is that the previous owner somehow pushed openwrt to partition 1.
I tested it via Tftp / Putty and various instructions but unfortunately without success.

Sorry for the bad english!

absolutely can't get it off the part. No matter what I always try OpenWRT. Could someone possibly help me?

My guess is that the previous owner somehow pushed openwrt to partition 1.

That is so vague, that please start the explanation again...

What is the problem?
What do you want to actually do?
(Which exact OpenWrt version your router is running?)

Hello, so I bought a Linksys Wrt32X. The previous owner kinda put openwrt on it. It also starts when you turn on the router, but I would like to have the entire router on factory firmware (original) first.

Now I've tried to bottle the router again, but for inexplicable reasons it doesn't work at all.

Then I tried to get the router back to the original as described by Linksys, but it doesn't work.

Linksys Official Support - How to revert from OpenWRT to Stock Firmware

Get help with How to revert from OpenWRT to Stock Firmware

I also tried to get to another partition, which didn't work (I have the feeling that Openvpn was installed on partition 1 and there is nothing on partition 2.

No matter what I try, whether I try to install via Putty or TFTP as recommended by Linksys, nothing works and it always starts openwrt.

My Linksys WRT3200ACM came with intermittent connectivity issues. It will work fine for a while and then both LAN and WAN will fail until a system reboot. I'm returing it for an exchange but want to put stock firmware back on it before I do. Let's assume that I only know enough to find the stock firmware and access the router via PuTTY. After that, I'm clueless.

Even after these instructions only with Wrt32X no success.

I had read that I needed a serial USB cable and had to open the router, but I can't confirm whether that's the only way.

linksys wrt32x has 2 partitions. Do 3-on 3-off for 10 seconds each and you can manually switch to the other partition.

The advice I'd have given myself when I first received mine is to install openwrt at least 2x (1 per partition) and then you wont have this problem.

opkg update && opkg install luci-app-advanced-reboot
will allow you to see your partitions.

Personal experience but you have to use the -f or force option if you want to install the original linksys firmware. it will fail otherwise.

like to have the entire router on factory firmware (original) first.

There is nothing magical about "having the router on OEM factory firmware" first. Both Linksys OEM firmware and the OpenWrt firmwares write exactly the same flash areas, so if you intend to stay with OpenWrt, there is no benefit from going back to Linksys. But if you aim to drop OpenWrt totally and just have the Linksys OEM firmware there, then it is another story.

Some advice for going back to Linksys from SSH console:

To get back to OEM you will have to ssh into device and: scp image to /tmp sysupgrade -F -n /tmp/imagename Edit: my interpretation was that the OP was on LEDE and wanted off. Edit2: not if LEDE is on both, again my interpretation of the OP

Just change dir to /tmp, download the firmware from Linksys, (maybe verify it), then just run sysupgrade: (you can calculate sha256sum manually (with “sha256sum”) after downloading, if you want to verify the download at the router. But you naturally need the original checksum from OEM or self-calculated at PC or somewhere.) cd /tmp wget link-to-stock-firmware sha256sum /tmp/stock-firmware-filename sysupgrade -F -n /tmp/stock-firmware-filename e.g. cd /tmp wget http://downloads.linksys.com/…

You can also do the same from LuCI GUI:

Thanks for the tip from "kufkis"
I also did it exactly as you wrote.
After that I was shown under System - Advanced Reboot, with 2 partitions.
Partion 1 - Current - openwrt 21.02.2 and Partion 2 - alternative - linksys and a button with reboot to alternative firmware.
If I press the button, the router restarts and after a few seconds it has fully booted up again, but the "Internet" indicator lights up yellow and I have neither access to the Internet nor to the router (should be blue). A reset does not bring success either, it always comes back to this point.

So I have to switch off then on and do it 3 times so that I have access and internet again. But then I'm back on openwrt

@hnyman I also tried your two links with this firmware from Linksys homepage:

Get help with WRT32X Downloads

unfortunately also without success
I also did the same thing with Luci, which was also unsuccessful

Can it possibly be that the 2nd partition is damaged or empty? or the predecessor did something wrong when installing? 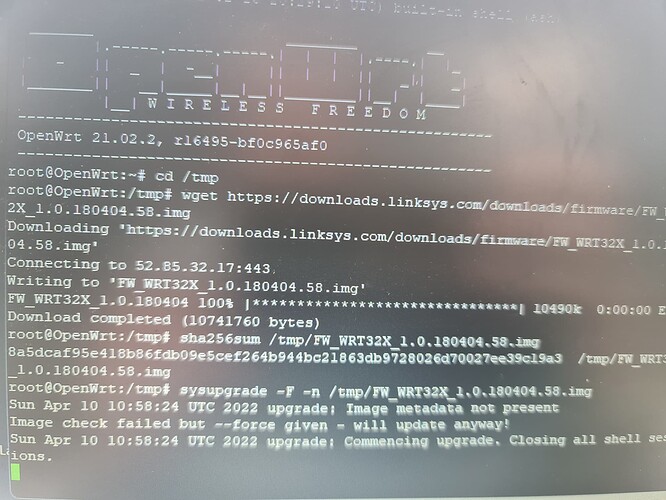 Hey, this may sound trivial, but when you reboot to the alternative firmware, you may also need to reboot the other equipment. They may have different local keys that identify them on the LAN. your local devices could be treating your alternative boot settings as an intruder since the router was just using different settings.

Unfortunately, restarting all other devices does not bring the desired success. The internet control lamp doesn't really have anything to do with the other devices either. It only shows that it is connected to the internet.

Unfortunately, access to the Linksys is also not possible.
Do you have any other idea???
Can it be that the alternative firmware is defective?

Can it be that the alternative firmware is defective?

Not really, at least the firmware itself, as that no role in flashing a new one.

I have already installed and booted directly from there, unfortunately without the desired success, as already mentioned above 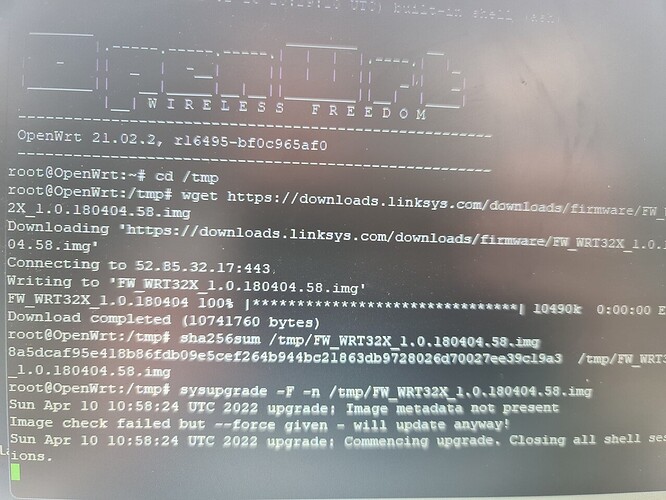 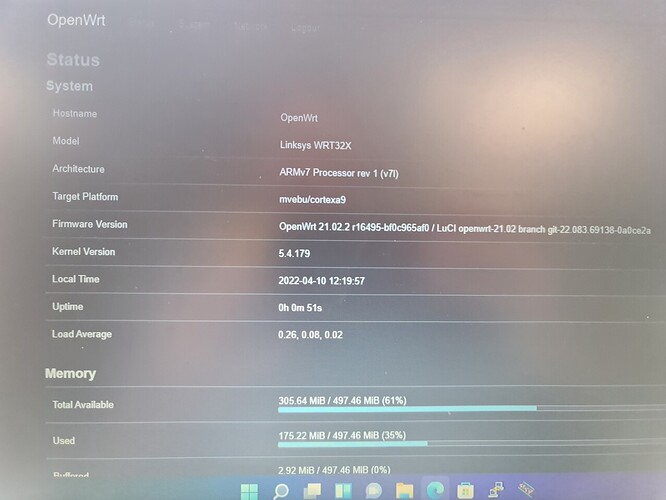 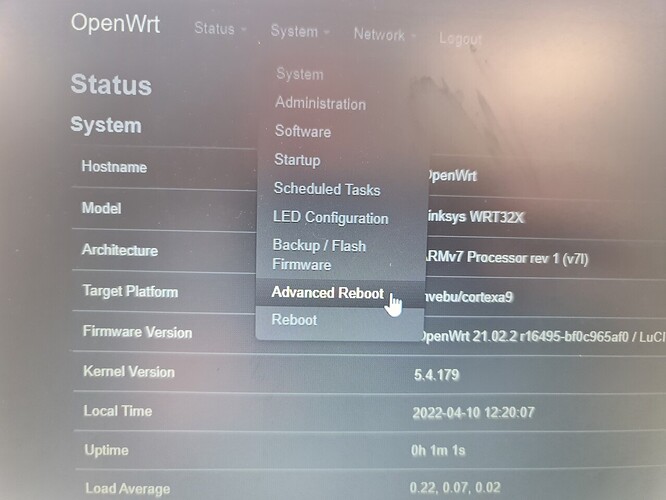 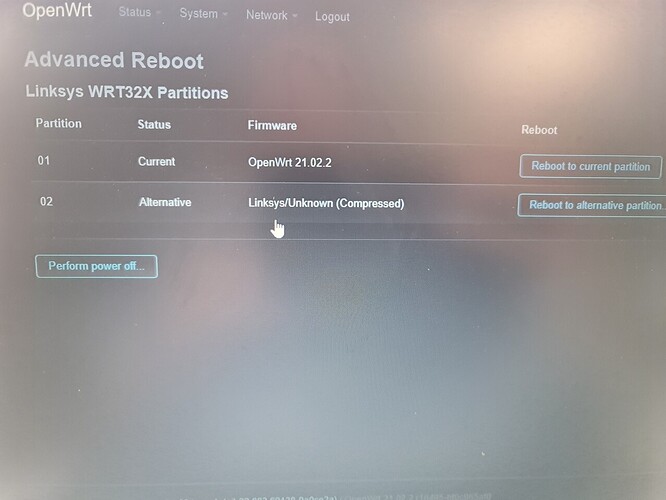 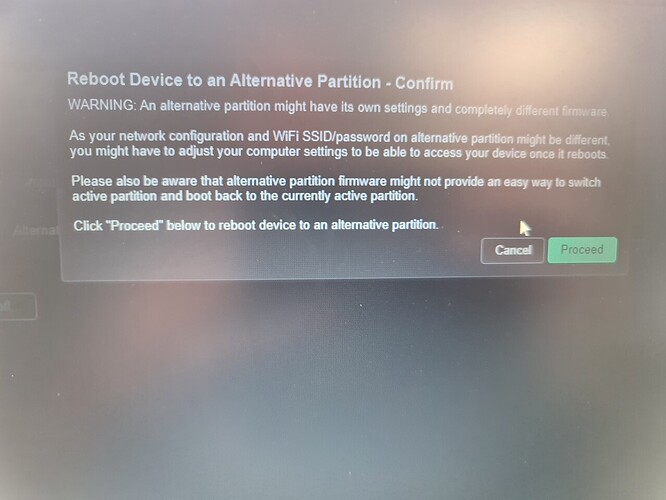 So no matter what I do, I can't get to Linksys

That sysupgrade from SSH looks normal, upto the moment when network connectivity is broken (normal).

One possibility is that there is something wrong with the boot commands in u-boot.

If you run the command fw_printenv from SSH console, what u-boot variables you see?
The boot commands in use should be visible.

Please copy them from your terminal here as text, instead of taking a photo.

some wonky char in your env?

Edit: therre appears to be a character in your env thaat does not belong and is probably stopping you device from switching partitions correctly.

unfortunately I don't know what you mean

I spotted the same anomaly that @anomeome noticed.

Looks like somebody (the previous owner?) has manually tried to edit the boot_part variable and now there is both erroneous boot-part and boot_#part with an invalid char in variable.

Just a guess, but that might be the reason for being unable to toggle booting.

Based on fw_setnv manuals, that should be accomplished with

You might need to copy paste that variable name with ▒

EDIT:
See that script that is in @anomeome's message hidden behind that triangle.
The toggled boot variables are

Your extra boot-part and boot_▒part may cause confusion in the u-boot if they are parsed. E.g. even if you toggle boot_cmd to 2 in the sysupgrade process, the "wrong" variable boot-cmd stays 1 and if that is parsed first with "case-insensitive" _ or - , the boot might stay on 1

Unfortunately I do not understand how to get to the script. Do I have to have Linux there? If so, I'll have to come up with something else.

There is z copy icon in the corner of the window when you open the script pulldown, ssh into to your device, copy into file and run

or just fix up your env as per what you see in the script as indicated above by @hnyman post. There is also a uboot command to reset your env, IIRC resetenv, not sure if that is available at the CLI in OpenWrt though.