After receiving new Linksys Smart Wi-Fi series device yesterday and realizing I've viewed the specification site a week ago in private mode so it's URL was not saved (it contained PCB photo too) and google was not throwing it out anymore, without much hesitation I've decided to open it up and check hardware specs myself.
Everything went easily and I could read NAND and RAM model numbers from chips, meanwhile I noticed two clips holding the board in the bottom case and just thought no need to pull it out since there are no any major components on the bottom side of the board.
Still out of curiosity, I detached antenna cables and pulled the board out completely just to find this: 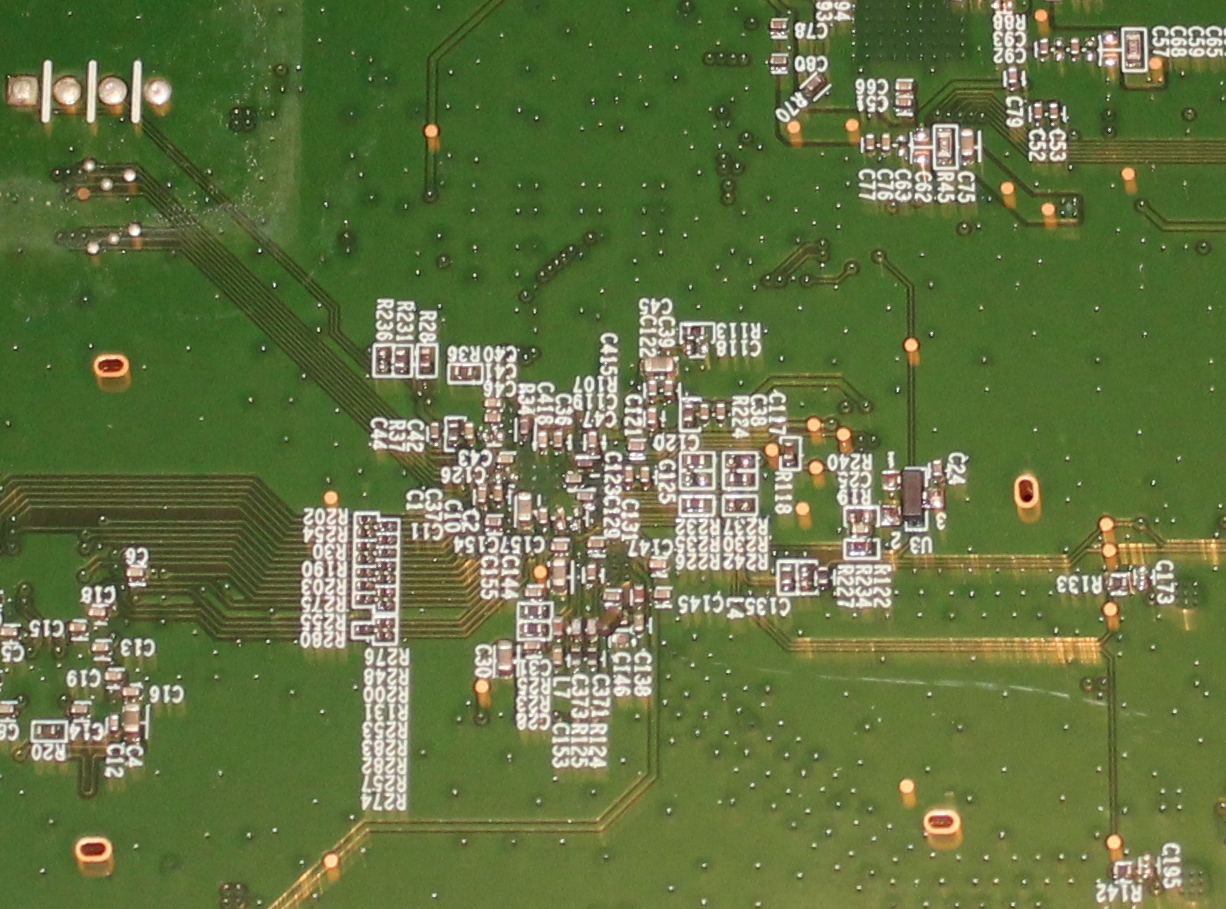 Seems like a scratch on the board made with some sharp object that hit directly to C138, ripped it off the board and possibly even shorted with another white capacitor!
There are also very obvious glue and dirt traces of who-knows-what-kind-of UART reader that was attached to the board. Device was bought from well-known PC shop in my country.
What about others owning Linksys router/AP, do you ever check devices you buy or are scared to void warranty?

Every manufacturer has bad devices slip through the QA cracks so I wouldn't say this is anything Linksys-specific. I see the scratch which is ugly but nothing I haven't seen before on other (new) boards occasionally but C138 looks fine to me. (perhaps I'm not seeing what you are due to the photo resolution which is a bit blurry on the fine details)

I doubt any manufacturer would want to spend their time doing that kind of stuff to one of their products. Or someone could have bought the device, experimented with it, and then return to the shop, who sold it as new again.

Device was bought from well-known PC shop in my country.

Was it sold as brand new or refurbished or...?
Was the packaging sealed somehow (plastic shrinkwrap? Adhesive sticker over the opening or thelike?) and the seal undamaged?

@eduperez it's not that they want to do that, sometimes devices get damaged during manufacturing/handling and don't get caught in QA. I've had brand new devices with loose parts (screws or components) rattling around when I received them. Sometimes stuff just goes wrong and doesn't get caught.

What @pbel said, there's not a single (consumer) brand that has 0% DOA.

package was sealed with transparent plastic shrinkwrap. no any kind of stickers or holograms (like alfa cards have) on it. but the sale price was lowered by about 40% or so. seems like it explains everything. linksys needs to get rid of faulty series somehow so they drop the price..

...or simply a sale by the store/chain. I honestly don't think you need to get all conspiracy about it.

Shrink plastic machines are not that expensive, if I owned a big shop and wanted to resell returned devices, I would buy one.

Seems like a scratch on the board made with some sharp object that hit directly to C138, ripped it off the board and possibly even shorted with another white capacitor!

And? Does it work?
If yes, who cares about some missing capacitor/s and a scratch on PCB?

it works but that is not point here. imagine the capacitor is in power circuit for wifi FEM, and you spend an eternity trying to make wifi driver stable (once flashed openwrt of course). this just an example, that same capacitor could cause issue for any other circuitry on the router.
for what i can tell after some short tests of linksys firmware 5GHz range is not that good even though it's wifi is wired through 2 FEMs

update: after soldering broken capacitor back in its place i see difference in 2.4GHz wifi.

initially, those were the reading of wifi strength on bootup:

between step 1 and 2 there is a short timeframe when power drop somewhere in between -37dBm and -55dBm, assuming recalibration of wifi chip as it is present in both situations.

linksys malfunction and in error. not to mention bloated webinterface