I just came off reading this thread:

Is there a NXP.com developer that is also an openwrt lover? (related to Linksys WRT and MWLWIFI) For Developers

Hello! Since Marvell sold the Wifi portfolio, it is possible that someone could help us with the MWLWIFI package? Works: 2.4 Ghz and 5 Ghz non DFS Not working: radar garbage MU MIMO

I agree with the people who replied this thread that despite it problems it is still best openwrt router out there.

I am just wondering given how problematic the wifi drivers (mwlwifi) and/or firmware (88W8964) for Linksys WRT1900 and WRT3200 may be we could start a gofundme or kickstarter and if the pool is big enough may be the developers (whoever they are) can take this on as a side project outside of marvell or NXP.

I am not familiar with what can still be done or what should work as envisioned but the issues I have with my 3200:

Wifi drops, wifi stops broadcasting from time to time, 802.11r ... etc I think could be worked on. The main objective is to have a stable firmware (and/or drivers) and deliver on what should have been its envisioned capabilities.

I think Linksys routers enthusiasts of OpenWRT can part with 10 or 2 or 30 dollars each to make their 1900 or 3200 reliable and more capable router and maintain their sanity. I am sure we are thousands with Linksys 1900 and 3200. If we pool that I am sure we can get the developers who worked on this to take this on.

What are your thoughts on this?

What are your thoughts on this?

There is no way to overcome the large closed-source firmware part.
The open-source driver relies on the functionality of that firmware blob.

You might want to contact kaloz at GitHub: he was a Marvel employee, who maintained the official drivers. He could be interested in working on the drivers, or know someone else who is interested.

As @hnyman commented, the biggest difficulty is at the closed-source firmware. Without the source code, any development is mostly impossible. And current employees will probably be prevented from working on it, even as a side project.

Well, he has pretty much disappeared from the OpenWrt circles although he is one of the original OpenWrt founders in 2004-2005. Regarding the mwlwifi opensource drivers, they are still located in his repo, but since the introduction he did not really do much anything for them.

The development of the opensource drivers was a mystery the whole time, as it seemed to be a task of a single Linksys employee, who probbaly just implemented partially the fixes done to the proprietary driver code.

Sad, as WRT3200ACM is probably still the most powerful non-x86 router, but as the wifi is crippled, the usefulness is limited.

Was hoping if we gather a big enough pot. Someone, Kaloz or some hacker with hex or assembly coding skills can take this on. That’s why was hoping if we can blast a message openwrt linksys users with a gofundme / kickstarter to get pledges. Even if we $5 each from 1000 linksys owners that’s 5k. It’s big enough prize/reward that hackers deem it worthwhile to submit vulnerabilities to companies. I’m not saying we get black hatters but if black hatters would think it’s worthwhile what more white ones

I will admit, I just only have good intentions but technically don’t know much about what should be present as an OpenWRT feature I just hate having my two linksys routers go to waste or not used to its fullest potential.

As a start, maybe OpenWRT devs can help build the specs or at least feature list. As this will form part with what will entice users to fund the campaign.

Number 1 i guess is reliability,
Number 2, suppport for other features which the hardware (radios, ram and processors) can support. I can only think of 802.11r, but mesh seems to be nice too.
Number 3, ...

IMHO the solution would be some company that take the license and publish modified and fixed firmware blob. (The same solution we have with the shitty ath10k upstream firmware blob that needs an external company (Candela tech) to actually fix bugs reported by the community)
Problem is that Candela tech actually sell dedicated card and can gain some $$$ from fixing problems... AFAIK there isn't a way to make external card based on mwlwifi chip

I see your point. What if we make it a prize? If they can hack it then the funding amount is their prize. If they fail then no payment.

May as well just sign the petition. I have not bothered as I lack the requisite headgear for engaging in a contact sport with a hard, immovable object.

Sure why not. This petition can happen on top of what I’m discussing

certainly makes chances of success better if we dovetail.

In my vet humble opinion... you are being very naive here. However, I would really love to be proven wrong!

Anyway, will leave this forum post for anyone who has a good idea on how we can fix and rightly maximize our beloved Linksys routers.

I found this document ... may point us to the right direction.

I guess we will need donor routers as tinkering with this can brick the router.

Signed and chipped in £10 to help spread the word!

You mean you Chipped in £10 in the change.org petition?

Just as a further update, I have also reached out to EFF since they offer legal services. Someone responded and gave a ticket number for tracking. 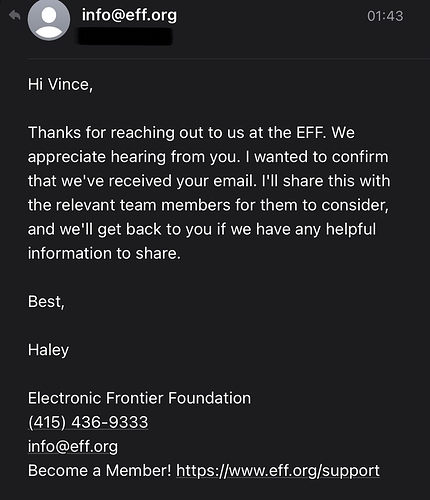 Just in case this qualifies for their legal assistance who among us is best contact to provide the best historical and technical context regarding this issue?

I think it cannot be Kaloz as he still works for NXP.

I did some scrounging and looks like it's NXP that needs to opensource the firmware. The weird thing about it, then seemed to have released the code for other firmwares except the ones running the more powerful routers. Hopefully this is just a case of "just overlooked" and not a corporate decision to screw us.

Not sure about what you expect from the EFF: we obviously have the right to ask them to open-source the firmware, but (unless we can prove there is GNU code in their firmware) they also have the right to refuse our request.

I did some scrounging and looks like it's NXP that needs to opensource the firmware.

The weird thing about it, then seemed to have released the code for other firmwares except the ones running the more powerful routers.

Have they released the code for the router's firmware (the equivalent of OpenWrt)? Or the chipsets' firmware (what we really need)? This can be a bit confusing, since the word firmware has two different meanings here.

Yes I did. I know it's not much but every little helps right?

Hmmm ... sorry I don’t know. All I can say, I am using “firmware” in the context of what @hnyman said here below:

Apologies, if this sounds like I am doing things haphazardly ... I am just throwing everything and just seeing what sticks. I am (hopefully not alone) just quite desperate to see if we can have a way forward.

My main intent is that we (OpenWRT) could organize and make a structured team and strategize how we could move forward or at least make one final push to solve this “firmware” issue before we give up and surrender all hope. That’s the reason why I wanted some kickstarter (or something similar) and funding setup as I’m sure we will need money from we will go from here. Also why we I approach EFF too and as responded in this thread there’s a change.org petition ongoing who seem to be in a similar situation and like minded as me

how we could move forward

if you can demonstrate that the stock device( and firmware ) does not deliver what it states on the box... most countries have specific laws to prevent false claims by the manufacturer... which in AU entitles you to;