I can't get Linksys EA4500 V1 TO Install lede-17.01.4-kirkwood-linksys-viper-squashfs-factory.bin. After uploading the firmware the router continues to run on the stock Linksys firmware. Any suggestion on how to get it installed?

edit - just in case you're not already aware, development builds don't have Luci (gui), if you manage to get a development build installed, connect your ea4500 to the internet, ssh in and run -

This seems to be the archive of OpenWrt snapshots (development builds)

Curious; I just bought an EA4500 on eBay and LEDE 17.01.4 installed very easily. Not sure if mine is v1 or v2 though. I'm having some other maybe-problems (overheating, unstable performance) but installation was smooth.

[edit]Hmm, wish I read this thread before I bought this EA4500, sounds like overheating and instability are standard with this device. I've gone back to my TPLink with its much less impressive specs and much better performance.

Which download link did you use to flash your router? I want to replicate what you did.

Sounds like we used the same file. I got the Firmware OpenWRT install file from here, second link from the bottom.

I did a factory reset first (to get the password back to 'admin'), then logged into the Cisco CloudConnect firmware, then I flashed the OpenWRT and it took right away. Sorry I don't have anything more helpful than that. I guess I'd try flashing the latest Linksys firmware, then trying OpenWRT from there?

I jumped right in to lede-imagebuilder-17.01.5 compiled with desired programs yesterday, as I received my ea4500 from ebay yesterday and so it's been running perfectly fine the heating issue is not a nuisance as I thought it would've been however I have a fan in the room and so it receives air and it's sits on some of my old medication pill bottles. Wifi is pretty stable I'm aware of marvell drivers but through put is great for both radios, wifi is not that much a of deal breaker for me as my daughter hasn't had any issues with her smartphone, her two ipads, I have a two laptops, one is an asus is running a win 10 that has a stock atheros card just a b,g,n that works well and a hp laptop dual boot win 10/ debian 9 with a dual band intel card and note that linux driver works differently than windows of course. I see better performance in windows drivers than linux but I don't complain as long it's has decent throughput. luci-app-sqm is working well for my network bandwidth. I played some black ops last night no issues with luci-app-upnp, xbox is recognized as well. Not seeing high sirq during wifi usage so far so good. Compile a lede-17.01.5-kirkwood-linksys-viper-squashfs-factory.bin used that to bring the linksys model over to lede. 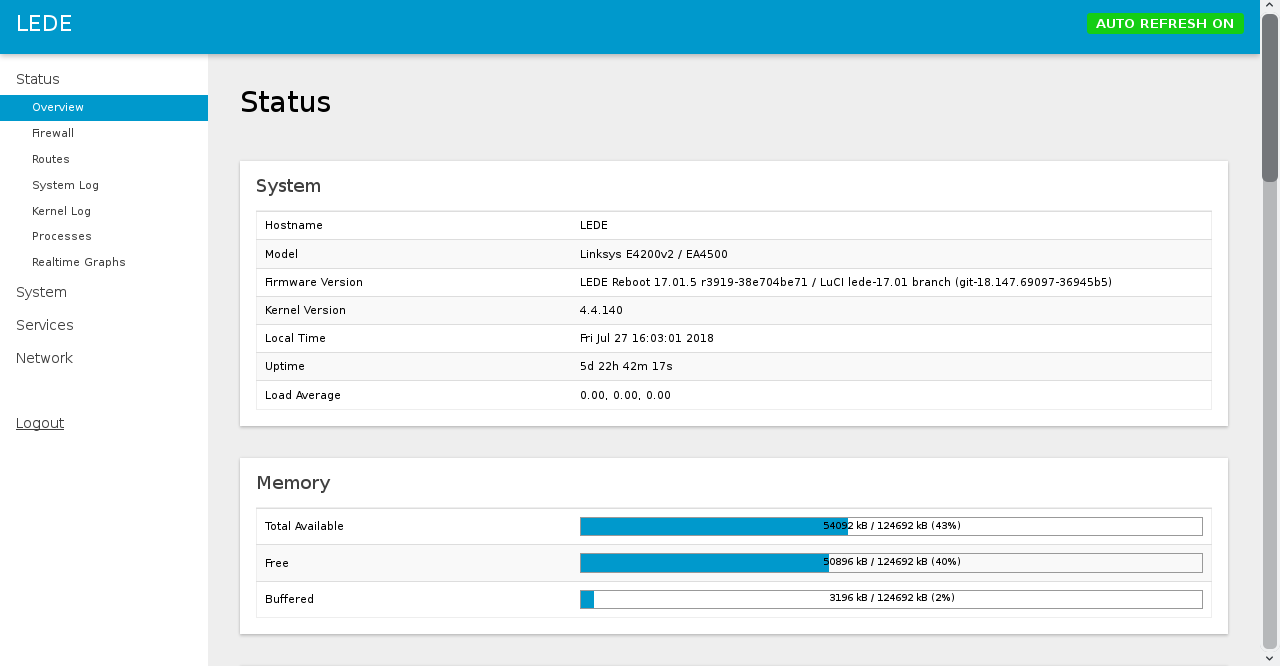 Had been using this version of lede for 5 days and no slow downs, pretty stable no real heating issues to worry about wifi is not a deal breaker as mentioned in OP when using either windows or linux drivers performance will very as i only use a intel 5100agn while linux seems to kinda struggle on 2.4 but 5ghz runs pretty snappy when using linux, windows drivers works pretty solid for both radios. Lan throughput non stop no hiccups when using sqm no issues on high sirq. Very pleased that lede/openwrt development all in all for this device.