For more details, please refer to Rootfs on External Storage (extroot) in OpenWrt.

It's referrred to in the instructions you posted.

How can i make my flash based linux work from SD card?

As wulfy23 states, if you follow those instructions you will be able to use the SD card for storage, as if it was "the" root file system.

As wulfy23 also points out, you're not really booting from SD, but just using it for storage.

If you actually want to boot from SD, you probably either need to change the boot loader args passed to the kernel or, more likely, build an image with the root partition specified as being on the SD card and appropriate drivers built into the kernel.

Unlike an x86 system with a BIOS, embedded systems generally can't "auto-detect" where the root file system resides and magically mount it.

Thanks. I think i don't whant to boot from the SD.
I wish to have more disk space and lower the risk of destroying the flash storage with to many write cycles.

But it seams to me that the SD Card (that works on my Laptop) is not recognized.
Are you sure i don't miss a driver?

Typically one needs the file system kernel module (such as kmod-fs-ext4) and block-mount. If mounting a USB-connected device, then the appropriate USB drivers are needed, such as kmod-usb-storage and perhaps a couple others (kmod-usb-storage-uas for higher speed connectivity with USB 3, for example).

I then connected a USB thumb drive to the USB-Host-Port and for that i get immediately a serial line:

When I attach or remove the SD Card nothing happens so I think there is some other problem here.
I just had a look in to the schematics. There is no controller between the Processor and the SD card slot so i have no idea where to start debug... 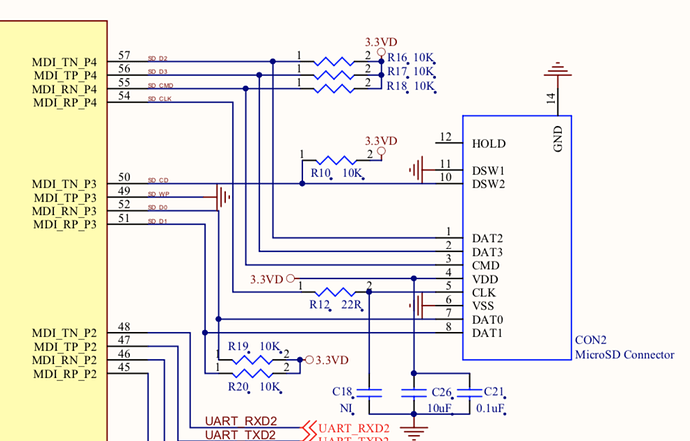 Any idea where to start search for the problem?

So the SD card reader is direct-attached, not through USB

https://openwrt.org/toh/tp-link/tl-mr3420/deep.mmc.hack might provide some hints, including mmc_spi module discussed there under "How to implement the Hotplug of SD-card" (I haven't worked through this as the SD-card readers I have dealt with are USB-attached.)

Is it possible its not working because mraa is not installed?
This shows a Pinout list with ethernet ports so im not so sure why...
I can not install it because cmake is not available. And i think my left over disk space is not enough as well.

You should always build on the build system, not on the device itself.

cmake should be available within the build system for packages.

Installing a package into ROM typically consumes about half the flash space it would if you installed it afterwards.

The pinouts for Ethernet are there likely because that is how one would connect an Ethernet phy (or perhaps socket) to the board.

I got the device to recognize the SD card by building manual on a Linux system.
It now works with no need of additional installations of other packages. All through added some packages in the make configmenu and I don't exactly know which one is responsible for this nice behavour because there are many possibilities.
It seams that the official config does not have any spi packages installed that may break te usage of the SPI based SD cardreader, but the mmc packages are maybe related as well...

Can somebody determine the packages that are not responsible for SD Card recognicion and I/O, so i can make only one or two new builds to determine the exact package.

I think it would make sense to insert the related package in the official build as soon as I find it.

maybe its one of those:

I think it would be great to add the first kmod-mmc to the default installation as the board has a SD-Cardreader on board.

I don't understand how email-lists work. I live in 2019.
How can i ask the developers to add this Kernel Package by default to the

For better or for worse, changing a kernel for one board on a target changes it for all. That would all the "weight" of the kernel module to all firmware, painful for devices with limited flash space for the kernel.

You could use an initramfs for initial boot to load the module, or add it to your local build config. I believe target/linux/ramips/mt76x8/config-4.14 would be the proper place for a local build.

or add it to your local build config.

can i make a local build config reproducable?

I found this in the manual but it does not describe how to write the script... (it confuses me.)

I have seen that config.seed is a list of some information and packets i chosen in make menuconfig can i somehow create a list of build dependencies and copy that in to my buildpath before starting the compilation with make?

can i make a local build config reproducable?

Yes, save your own config and it will be reproducible for a given set of sources (within reason, as it is a different compilation at a different time).

See below for how to configure your own local build -- copying config.seed directly is not a good way
as it is intended for buildbot use, not single-device builds.

How to copy release config to my build env? For Developers

I installed OpenWrt 18.06 on a Raspberry Pi 3 B, and it's running great, but I want to mount an NFS volume, and NFS doesn't seem to be included. Fine, the docs say I should install kmod-fs-nfs but I'm guessing I need nfs-utils as well. However, they don't come up as available packages, so I ended up looking to do my own build, following the quickstart image building guide. One thing is not clear to me though: if I use only the defaults in make menuconfig, will I basically get the same image as …

Thanks i read that and somehow found out how to use ./scripts/env new linkit-smart-7688 and I configured it and checked the ./scripts/env diff that showed >7000 new lines. But i do not see any changes in the folder: / < buildroot > /env/files/.
I expected to find a bunch of files that configures my build and that i can copy to another build in the future...
Where are those configurations saved?

.config in the root of the build tree. I believe that script symlinks it to ./env/.config

there is no .config in the root of my build. Look here: 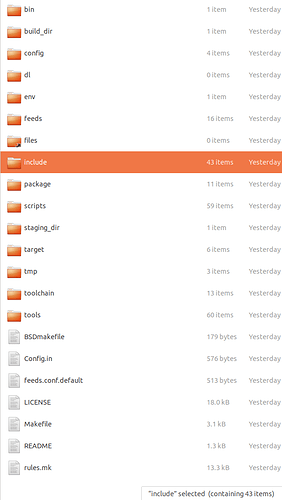 There almost certainly is. Likely a setting of your GUI to hide files. ls -A should list it.

true. and copying the ./config file to a blanc buildroot shows all the selected packages and config in make menuconfig! nice! Il try to build later. Thanks for that easy stuf!

./scripts/diffconfig.sh will show you what is different from defaults -- another useful tool