Is Zyxel - NBG6616 preinstalled with OpenWrt

Recently started looking into installing openwrt on my Zyxel router. The page with installation instructions mentioned connecting to 192.168.1.254 using SSH, so I tried that. I kept getting connection timeout, so I tried 192.168.1.1 instead and actually got a connection. To my surprise the welcome screen actually mentioned openwrt.

Why is this? Is it already running some sort of openwrt from the manufacturer? Is it still advisable to install the newest version of openwrt on this router? I attached a screenshot of the welcome screen. 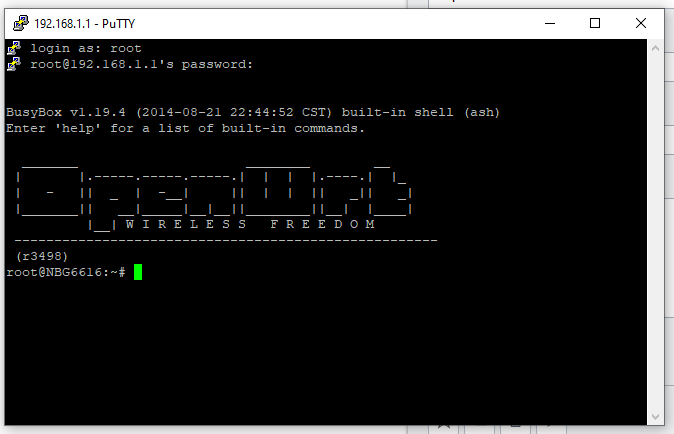 Many proprietary chipset SDKs (the software suite manufacturers get undet NDA) are loosely based on (typically ancient versions of) OpenWrt, with kernel-, drivers and more replaced with (usually old) proprietary ones and many more (often invasive) changes. The manufacturers then take the SDK, rip out the webinterface and add their own 'value added' and branded stuff. The results typically have very little in common with real OpenWrt (even if it might partially identify itself as such)

Thank you for the reply. That was also my initial thought. Is it advisable to upgrade the firmware in my router to the newest version of openwrt? That was actually what I was trying to do, but seeing that welcome screen made me think twice before going on with the project

You're assuming vanilla OpenWrt supports your device because it's already using an OEM image based on an older OpenWrt codebase, but that is often not the case.

If official support is present and the wiki indicates your device has support and functional images, then yes you can upgrade to vanilla OpenWrt. If a sysupgrade image is available, then you can do it even as easily as running sysupgrade -n /tmp/path/to/firmware.

Just going to add here that in agreeing with slh over ancient builds of OpenWRT. If you have a look at Qualcomm's Reference Design Kit (QRDK), there are traces of Qualcomm using OpenWRT as a basis for their RDK.

Vendors like Zyxel, would most definitely use a reference board from hardware manufacturers like Qualcomm, add extra hardware on top of that reference board, plus all the fancy software to differentiate that particular model from the rest of their product line-up, as well as other vendors and their respective product lines. It would not be surprising that, in turn of using Qualcomm's reference board, they would also be using QRDK, which is how OpenWRT came about with certain vendors.

So in regards to all this, would it be better to install the latest OpenWRT available to the model of my router? I'm just trying to figure out if there's anything worth to gain in doing so. I have no experience with stuff like this, and I wouldn't want to risk break something that's actually working, or get something that's not better, just for the fun of it

It was kinda fun to use putty to do an SSH connection to the router, but if I fuck it up I'm not really sure if I know how to fix it again

Only you are in a position to decide if you want to keep the OEM firmware or to install OpenWrt.

Of course, I'm just trying to figure out if there's actually something to gain for the upgrade to the newest available OpenWrt version. That is not something I can figure out for myself, as I'm not super familiar with OpenWrt as such. I was just recommended to do so by a friend.

What answer do you want to hear?

If developers and users of OpenWrt wouldn't see an advantage in using OpenWrt, it wouldn't exist. If it wouldn't need constant attention and development, the developers would cherish life, instead of contributing their free time.

If you want to install OpenWrt is an answer only the figure in your mirror can tell you. I'm not here to persuade you to follow greener pastures, the decision is yours alone.

Some pros and cons would be nice. I'm kinda new to this, but it seems pretty clear by now, that I'm not going to get any real advice regarding this, so nm.

According to the wiki your device is fully supported. So you shouldn't loose any functionality.

A pro of installing OpenWrt would be that you would be running true opensource, which can be configured the way you like it, including extra functionality through additional software. Further since the OEM OpenWrt version was forked, a lot of security enhancements have been added.

A con could be that you might loose proprietary drivers which can -for instance- give a higher throughput due to hardware NAT offload, or something like that. Further, your router works now so any change is a (small) risk.

Thanks for the reply. I will take it into consideration. I'm pretty sure that I want to try installing OpenWrt to be able to do some quality of service. I will post the results here as soon as I get it done.

I was not trying to be hostile or anything, I just wanted a bit of guidance in this regard. I'm perfectly aware of the risks, but it's nice to know just a little bit of the positives before going into something like this

Some pros and cons would be nice.

The pros are collected here: Reasons to use OpenWrt

@duskern We're not here to sell you vanilla OpenWrt. It's not like we're selling cars here. If you aren't missing anything on the stock firmware, then that's a valid reason to stick with it. If you need to be convinced to switch, that sounds very much like you made up your mind.

Some pros and cons would be nice.

Here are my pros and cons as a fairly novice user.
Pros: