Is possible mwan3 for an UTP and a 3G ppp?

I've reading some mwan3 docs and posts, but I haven't seen any example of how to achieve this for a traditional UTP port and an USB 3G dongle.

First limitation:
This is a single-port device. I already created the WAN interface (eth0.1), and the 3G modem interface. Both interfaces work, and I had set different metrics for each (wired is prefered): 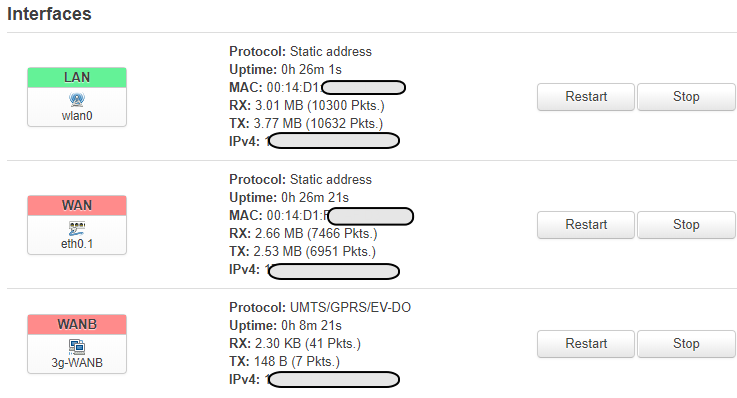 image737×398 26.2 KB
To be noted: the name of the second WAN on the config file is what I typed: WANB, whereas ifconfig reports it as 3g-WANB

image801×156 6.54 KB
I'm not sure which is the name I shall use for that interface. If I replace the default wanb with the generated 3g-WANB, mwan3 complains about invalid characters (the dash).

Second:
After creating the WAN interfaces, this device still only provides 1 port to assign to VLANs (i.e. no VLAN can be assigned to the USB connection):

Third:
Because this devices only has 32MB of RAM (that's a limitation too), I excluded IPv6 for the build. Later I removed wan6 and wanb6 references on Load Balance tab, but still mwan3 complaints about missing ip6tables:

So, it would be possible to use mwan3 for this setup? how?
Else, I could play with the routing table as a traditional router (and save RAM). It would be a lot easier, although not the same flexibility.