Is it even possible to assign VLAN to each SSID on OpenWrt?

Let me give everyone an idea of what I am trying to accomplish with OpenWRT on the WD MyNet N750. 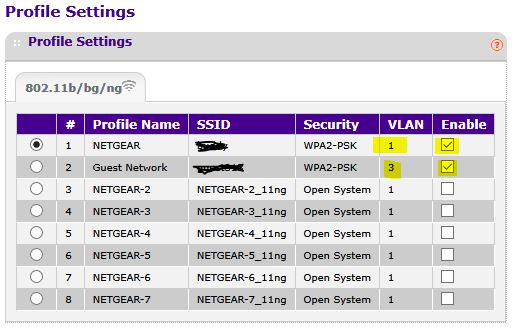 I have been looking at the gui menus in OpenWRT and I haven't seen a direct way to actually assign a vlan tag to the SSID. So is there a "workaround" or OpenWRT just isn't design to do that?

I want to ask because I don't want to waste any more time if it is not possible. Especially since I can't even change the IP address on the router.

(If that's not obvious on how to accomplish, please let us know if you prefer to configure with files, or with LuCI)

As an example of file-based config of the bridge interface:

It is option ifname 'eth0.100' that sets the VLAN tag, not the interface name.

Okay, that makes much more sense by creating a bridge so the SSID can sit on. So according to what you wrote each bridge can be assigned a vlan tag

It's actually the enslaved Ethernet interface that does the tagging/untagging on its "wire", but yes, it sounds like you've got it understood.

You'll probably want firewall rules to prevent VLAN-to-VLAN forwarding, as well as either or both controlling the "listeners" on the OpenWrt box itself, either or both with config of the service and "input" rules.