Image file and .bin file not obtained for Hummingboard

Hi all,
I have been trying to build an image using openwrt for Solidrun Hummingboard (i.mx6 quad 2GB Ram), but after building the image I have failed to find any .bin or .img file under the generic directory. The git version of openwrt used is 18.06. The following is the configuration selected for building the image : 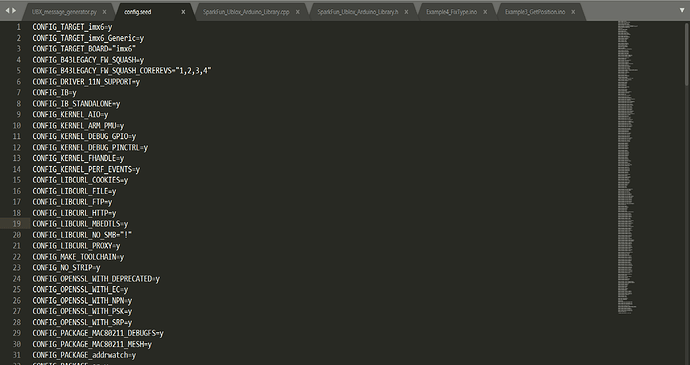 Openwrt_forum_query1.png1794×951 73 KB
The files that I get after building the image under generic directory are rootfs, bootfs, uImage, squashfs and .ubi files. Can someone please guide me on how to obtain image and bin file for hummingboard or plot out what exactly I am doing wrong.
Thanks in advance,
Emil Peter
jeff July 10, 2019, 7:56pm #2

I don't see the Hummingboard listed among devices supported by OpenWrt, either in the ToH or in the source

Are you using the Marvell source or another repo?

Thanks for replying. You are right Hummingboard is not listed among the devices supported by Openwrt since it is not an available option in the list of target devices. I am using Openwrt 18.06 source. So is there any other openwrt source which supports hummingboard or any alternative target which can be selected so as to obtain an image which would be working on hummingboard?
Note: The target I selected for building the image is Freescale i.MX6 and target profile as generic.

Seems that OpenWrt support for Hummingboard has been added in the meantime with https://git.openwrt.org/?p=openwrt/openwrt.git;a=commit;h=ded905ce431bfdb4809124e0f0a587013f980b07, but it is unclear to me which image should be used for this device (I couldn't find a dedicated image).