I tried to install the latest version of OpenWrt. The error message shown in the picture appeared. If I choose to force install , the system will not load any more.

What is the solution? 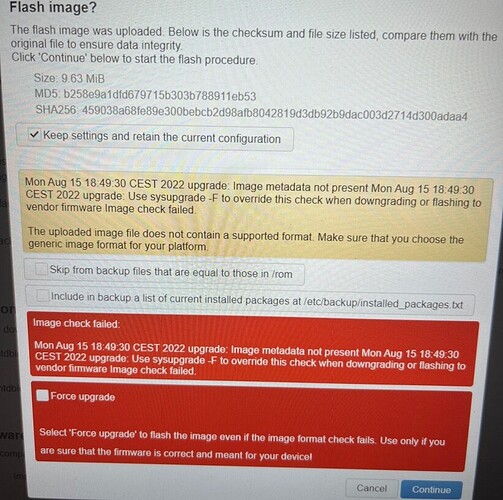 what is the solution?

What is the router?
Which image you are trying to install?
Which OpenWrt version is currently running in the router?

Xiaomi AX3200 and snapshot version. I would like to install the daily firmware.

But this interface also appears when I want to switch from the snapshot version to the stable version.

Based on the image hash in your screenshot (459...), you are trying to sysupgrade with factory image instead of the sysupgrade image...

Factory image is usually meant for flashing from the original OEM firmware, and not meant for sysupgrade of a router already running OpenWrt.

Your router Xiaomi redmi ax6s seems to have a sysupgrade image. You should likely use that.

Thank you very much for your help.