I found builds for it on the firmware selector.
But when I try to flash them, it says the file's invalid.
Does that mean I have to sign the build for it to be accepted?
If so, then how do I sign it?

My reading of the commit message (I don't own the device in question), suggests that you first need to flash https://www.cudytech.com/openwrt_software_download

I installed that exact firmware.
Turns out that that is a copy of OpernWRT.
Presumably customized by Cudy Tech to work right on their routers.

The next step would be installing real/ vanilla OpenWrt, which probably is accepted by this firmware version (keep in mind not to retain settings over the procedure).

The one they have is a real OpenWRT.
I'll stick with it, since the only vanilla OpenWRT versions that currently support this thing are snapshots.

The one they have is a real OpenWRT

Their stock firmware for it obviously isn't.
Their copy of OpenWRT you linked however, is. 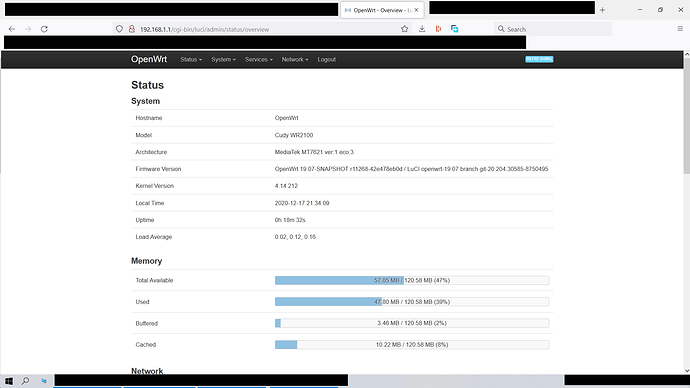 I have a bridge to sell you in Brooklyn…

That's irrelevant.
I have Cudy Tech's OpenWRT build they built for their router model that I have.
Said build is the one you linked to at https://www.cudytech.com/openwrt_software_download

Tried installing any packages yet?

That is still unofficial OEM OpenWrt, Official "real" OpenWrt version 19.07 did not support the device.

I do not think there is a lot of things cudy tech customized to "work right on their routers", because this device is the same as 4-5 other chinese OEM routers with same chipset that are supported already. Only thing that changes is flash partitions on the firmware chip and LED pins to light the right lights.

So in the future when official OpenWrt releases will support your device you can do a firmware upgrade to that without losing features.

Being unofficial does not automatically mean something isn't real.

You were asking about "real OpenWrt", the definition for that is simple, provided, supported and binary compatible with/ by the OpenWrt(TM) project. Any fork, regardless of intentions or impact of the code changes is not "real OpenWrt", by the very definition of the word.

Being unofficial does not automatically mean something isn't real.

Yes it does. It's a fork with third party modifications, frozen in time and possibly not updated.
Not the real OpenWrt. If it was the real OpenWrt it would not run on your device at version 19.07.

This is not like pirating a movie or pirating windows where you just make a straight copy of something and don't pay for it, there it is indeed the same exact thing.
They made changes to it, so that makes it a derivative work.