How would you speed this up? (RV Repeater) 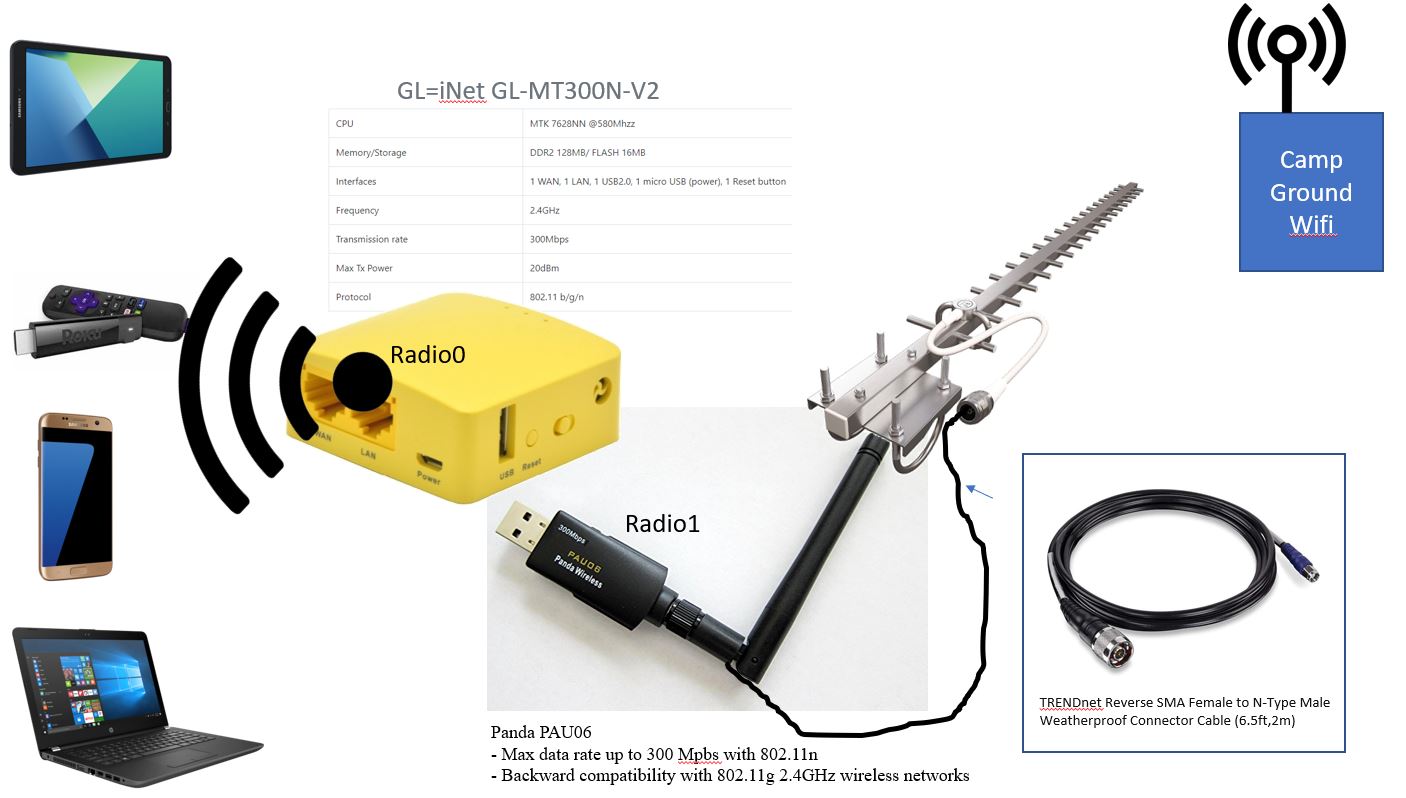 I'm trying to build a repeater for use in an RV (Recreational Vehicle).

Everything is working; however, it is way too slow.

Here's the speeds and below I'll discuss the steps to reproduce them.

Here's what I've done so far:

I know the house WiFi is solid because I get 110/11 on my laptop directly.

I didn't change ANYTHING ELSE in an attempt to figure out what is slowing it down.

Can you think why OpenWrt would be 25-50x slower doing WiFi to WiFi?

I want to eventually roll TravelMate into this, but not until I figure out this performance puzzle.

Looks like both radios are on the 2.4GHz band. Are they on overlapping channels?

even if they aren't overlapping channels, transmitting on one radio is going to
make the other radio unable to hear the signal on the other channel (the radios
do not have enough isolation to support this).

If you can separate your antennas (one inside, one outside, as near as you can
to being directly above each other), you can get a little more isolation that
may help things work a bit better.

but repeating on the same band is always going to be a problem.

I've got the antenna's about 12 feet apart. The radio1 antenna is directional so that should also be helping.

I just turned down the power on radio0 and it didn't make any difference.

What I can't understand is why the upload is consistently 11 Mbps and only the download is impacted. I'd think it would impact both.

So, I've been full-time RVing for 9 years and 10 years before that full-time on a sailboat. In those years, I've never seen a "repeater" setup that didn't have a significant performance penalty. Granted, what you're seeing is a particularly bad example. But you're using a very low-end router, and many of those USB WiFi adapters have terrible range.

What has worked, for me and many others, is a setup where one has an outdoor "client" (also known as a "station") router, that's connected to an inside router using Ethernet. That way you have one router doing nothing but communicating with the campground, and a second router that's handling your inside LAN. With a Gigabit connection between the two there should be little or no penalty.

Ubiquiti's NanoStation Loco 2.4GHz works great in Station mode, and is a router and directional antenna all in one package. At less then $50 it's nicely priced as well. It runs off of 24V passive PoE, and is designed for outdoor use. It can be pole mounted, fence post mounted or suction cupped to the outside of your RV using a window/wall mount kit that's made for it.

Inside, use a mobile or residential router that supports Gigabit WAN (and runs OpenWRT if you like). Most importantly, you want something that has really good dual simultaneous band WiFi for inside the rig. Cellular modem support (specifically those that support Carrier Aggregation and MIMO antenna arrays) is a decided plus here for most RVers.

Not a fix for your current set of hardware, but more of a path forward to something that has worked for many in everyday use.

I actually purchased two routers with the intent of running Ethernet between them as you've suggested. I was just trying to get away from having to manage with two instances of OpenWrt since I think the inside router would need to be bridged which means you can't access it again without putting a static IP on your laptop which seems the opposite of what I'll be wanting to do while relaxing.

I still think there is a solution to what I'm doing here. That USB radio has no problem pushing 50 Mbps through the router when the other side is a cable.

I just tried putting both the uplink and downlink (master and client) on the same radio and I'm getting 18/11 Mbps. I can't imagine it is interference since both are using the exact same radio and antenna.

No need to bridge -- double (triple, quadruple, etc.) NAT is just part of RVing life. In the 3G days we used to get a public IP on cellular at least, but those days are gone...

How long is the cable between your outdoor directional antenna and the USB adapter (and what kind of coax is it)? If yours is like most setups I see, you're throwing away too much of your antenna's gain in cable loss. Much better to have the antenna and client router closely-coupled, with maybe .25db (connector only) loss, and then you can use whatever length Ethernet cable you want (OK, up to 300').

Another option would be to keep your current directional antenna and use a Ubiquiti Bullet M2 instead. These have an N male connector instead of a built-in antenna, but are outdoor rated and PoE powered. Get the higher end Gigabit version, given your desire for performance over 100Mbps.

If you're going to have two routers anyway, having one of them strictly in client/station mode is much more likely to get you where you want to go.

I know the house WiFi is solid because I get 110/11 on my laptop directly.

The obvious question, in comparing to your laptop's performance, is what frequency is your laptop connecting to the campground on, and what WiFi standard is being used? Many campgrounds now have 5GHz -- most are 802.11n but a few are turning up with 802.11ac. It appears your repeater is strictly a 2.4GHz operation, and as such is likely to struggle in a busy campground.

If your laptop is using 5GHz to connect directly, and your repeater is 2.4GHz, there's little point in comparing the two. If you're going to be moving around, you really want 2.4 and 5GHz client/station outdoor equipment. 5GHz, with its numerous channels and lighter usage is the way to go whenever possible. 5GHz doesn't travel through walls as well though, so really benefits from being outdoors.

Fair point. I didn't mention that I'm testing this in my house. I'm definitely connecting with 2.4 when using Radio0 for the LAN and getting 77/11.

Still can't figure out why it is 2/11 using different antennas and getting 18/11 using the same antenna. I wonder if the firewall/routing is less optimized using two different physical devices (radios).

Still can't figure out why it is 2/11 using different antennas and getting 18/11 using the same antenna. I wonder if the firewall/routing is less optimized using two different physical devices (radios).

I appreciate your desire to get to the bottom of this -- I've been there myself. However, if you get this setup working the best it can, you'll probably only go from terrible to bad. If the goal is to get something that will work well when you're actually out RVing, and you're planning to use two routers anyway, let one router talk to the campground and the other to your LAN.

When you use the same radio, the driver is better able to synchronize the operation of the two functions. For example it generally knows not to transmit a packet to the laptop at the same time it is expecting to receive a packet from the ISP. With two radios the one transmitting to the laptop is likely to jam the one receiving from the ISP even if they are on different channels.

Thanks mk24, that makes a ton of sense.

I wonder if I got a router with two antennas and put the yogi on one and left the other one for the inside of the RV.

My step brother bought a WRT54GL from JefaTech years ago and that is how they did it.!
It looks like the next picture.

I might give that a try next. However I like the idea of a radio being able to use all of power on one antenna.

I did setup two separate routers as suggested by mk24. It works ok. Just seems less than ideal. 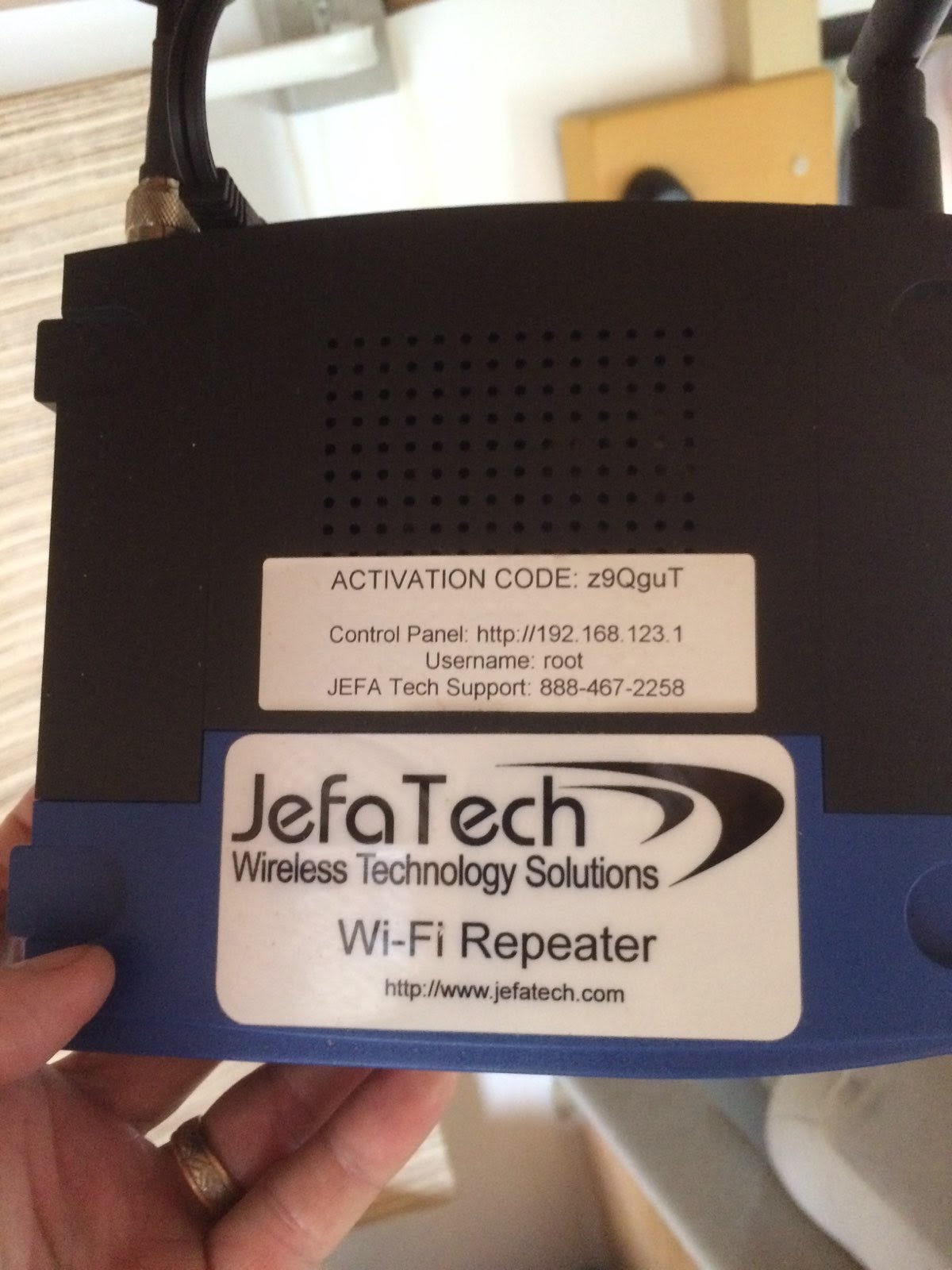 Is the semi-pro thing.

I looked this up today (3/19/22) and all the wifi repeater hardware for RV's and boats are discontinued. Too bad.

today (3/19/22) and all the wifi repeater hardware for RV's and boats are discontinued. Too bad.

If you mean repeaters built with 20 year old, huge 802.11b equipment, yep. There are many new small, travel and low-power repeaters on the market today. I don't think they're marketed as RV/boat as much anymore.