How to know when new release comes out? Or security issues?

I define "notification" as an attempt to reach out and "notify" end-users. This would mean email or RSS feed probably qualifies. You could notify on private networks like twitter, reddit, and facebook too, but give the large number of people who don't use those, using them alone would probably not be sufficient,

The OpenWRT project doesn't make the effort to notify users. There's no security announcements and never has been.

The old message board had a specific section where new releases were posted by admins and that forum could send out email notifications, so that worked, but admins didn't use it consistently and the old forum died anyway.

Posting a notice on a website which requires the user to manually check on a regular basis is not a means of notification. That's publication, not notification.

Unless I am mistaken, OpenWRT does not do any of the following:

What are the OpenWrt maintenance tasks beside "Upgrading OpenWrt firmware" when new release announced
tmomas June 18, 2020, 9:45am #14

As soon as the preparation of the release notes start (this happens usually well before the official release), you will get a notification email.

Unless I am mistaken, OpenWRT does not do any of the follo

Hi @Naftali it seems you have opened a can of worms!!

I forgot to mention: This also works for security advisories.
Simply subscribe to https://openwrt.org/advisory/start and chose advisory:* in order to get an email when something in the advisory namespace changes. 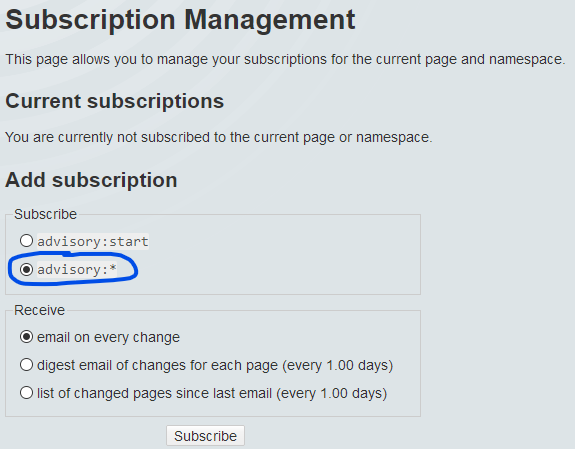 Hey, that's not bad! Good stuff. Thank you for sharing that.

Unfortunately, as you noted, this notification mechanism has a lot of problems. Looking at the release history for that page, half of the changes to this page were edits which were not related to an actual release. That's a lot of false positives. Additionally, like you said, the edits often don't happen exactly when new releases are available. Ultimately this feature just wasn't designed for notifying users of new releases. At least it's better than nothing. I've already set up an alert for myself for next time.

I personally don't use twitter or facebook, but some people do. It would be nice if you had some presence on those private networks, IF you wanted to do it, but I wouldn't make any of those the primary communication channel.

The r/openwrt subreddit has seen people posting about releases, but it's happening when git releases get tagged, so several days before when no builds are available yet, which is annoying.

There's no security announcements and never has been.

Cool. I was wrong about this! OpenWRT has started documenting and publishing security advisories as of a few months ago in late 2019. This is something I've wanted for a long time.

Email announcement would be nice.

But probably people installing by themselves OpenWrt won't be too bothered by it.

Personally I frequent some tech channels/forums and whenever there is a release, including point releases, I'll most likely notice it.

Off-topic: Am more disappointed that companies siphon off the project and not contributing back. Also the closed source nature of the wireless drivers is a pain in the less.

Or let an OpenWrt device do the research and send it to you own email address:

(I found this information here: https://www.kuketz-blog.de/openwrt-upgrade-einspielen-openwrt-teil7/

That will give you to many false positives

How about utilizing the forum for this?
I know there are already release topics, for example: OpenWrt 19.07.3 service release
But the are in the Installing and Using category, mixed with many other threads about troubleshooting etc... that makes it hard to keep track. In addition only the last release is pinned, older releases require explicit searching.
So my suggestion would be to create a specific "Announcements" category, where only mods and other selected people could create topics (if that is possible). Just for official release and security announcements. Then everyone that is interested could simply enable "Watching first post" (under the bell icon) function and receive reliable notifications.
What do you think? Especially @tmomas @jow

I like that idea. Having a dedicated announcement subsection is easy to implement and makes it simple for people to selectively follow. We can also retroactively move the old announcements there.

Thank you very much.
I love old-school mailing lists, much better than ad-laden web based forum.

You are the hero

But this forum has no ads

I don't know which sites have ads and tracking because https://github.com/gorhill/uBlock

The best one would be a new announcement section on the top forum, like others have suggested.