I'd like to build a dedicated wifi 6 (or maybe 6E if the project takes long to implement) AP to connect two wireless laptops to a wired NAS. My current AP+router is TP-link TL-XDR3020 AX3000 (Intel Lantiq), it works great but I don't really trust the firmware, and would prefer to separate NAS traffic from other devices e.g. smartphones which also use 5Ghz band, to maximize performance.

How realistic is getting this thing up and running under OpenWRT?

p.s. please let me know if I'm overthinking it, and should just use the TP-link AP+Router for everything. For reference, NAS uses enforced SMB3 encryption and local-only Syncthing, nothing else, with management over serial console. Still, I'd feel more at peace with a regularly updated open-source solution, and building a DIY AP+router sounds like fun.

If you don't trust your router, then change out the router for a SBC based router. Probably a RockPi or RockPro or something would work well. The RPi4 is a popular choice due to being widely available, cheap, and high performance for routing.

Then stick with commercial hardware for the WiFi stuff. either APs or wifi routers in AP mode. All that m.2/PCIe/miniPCIe adapter frankenaccesspoint stuff sounds like a nightmare of hardware and software glitches not to mention RF noise, and likely poor antenna design. RF is different from other kinds of electronics in that it needs to radiate efficiently without interference, it means physical layout is important.

I considered using RockPi4 as a router. It kinda seems like overkill for GBe, and I won't get 2.5Gbe with any reasonably priced wireless router/AP. Moreover, it does not help with rarely if ever updated wireless AP firmware.

All that m.2/PCIe/miniPCIe adapter frankenaccesspoint stuff sounds like a nightmare of hardware and software glitches not to mention RF noise, and likely poor antenna design.

FWIW all these adapters are very simple hardware-wise and absolutely transparent software-wise. The antennas will be placed as I decide, pretty sure I can mimic some existing AP design and adjust enclosure from some old equipment for my needs. No idea about RF noise, though, that's something I'm not familiar with. 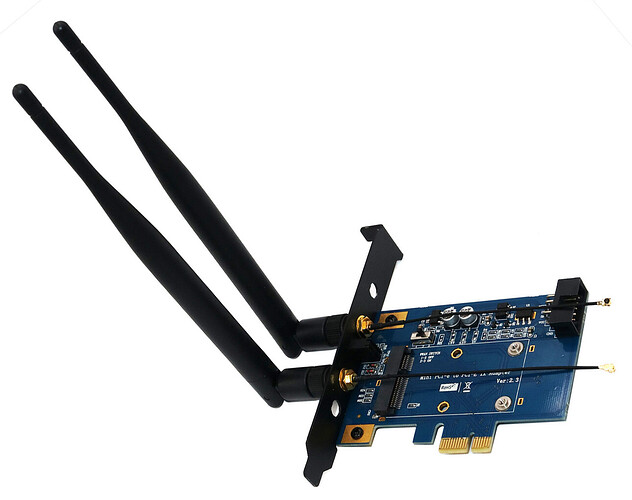 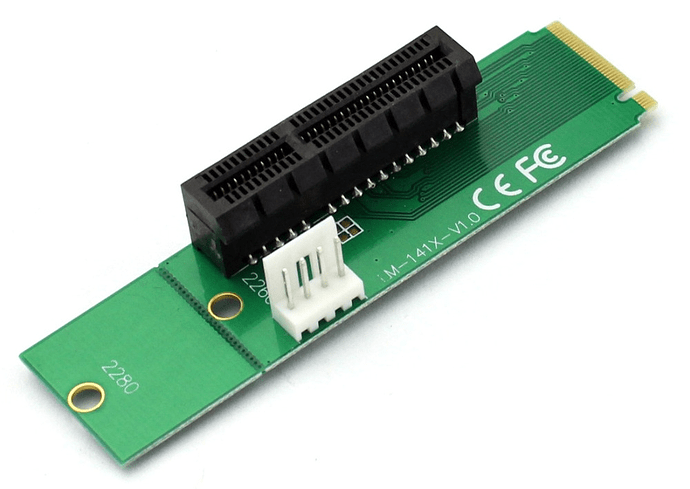 I don't feel I can trust any commercial solution I can afford to purchase, both money and time-wise. When a new wireless standard is out, I need it as soon as draft spec devices hit mainstream. Not by the time reputable brands finally start releasing devices for astronomical prices; by then, typically a newer wireless standard is just around the corner, thus for me they are obsolete on release.

A well-supported SBC with upgradeable WLAN can address all these concerns to a large degree. Waiting for a new AP WLAN card to appear on the market and get necessary software support is painful, but I feel I can live with that. Even though it will cost as much as SOHO router with the same capabilities and take a bit more time, for me it will be more justified than other options.

all those traces on this board are basically wifi antennas. They're on the order of a quarter or half wavelength long at 2.4GHz and a wavelength at 5GHz. So I don't know if they'll pick up a bunch of noise and put it onto the PCIe bus, but I'd expect that they would. Maybe it's a problem and maybe not, but it's certainly not what you'd want a wifi board engineer to do, put a whole bunch of straight traces that are about the right length to be wifi antennas like that on the board.

When a new wireless standard is out, I need it as soon as draft spec devices hit mainstream.

I guess if you're testing the latest wifi gear or such. But I don't imagine I'm going to get any wifi 6 clients for the next few years anyway, so it's irrelevant to me.

the biggest problem will be making sure you have a board with good drivers. Open Source drivers tend to reach high quality somewhere around 5 to 7 years after release in my opinion. Or in the case of 802.11ac never

They mostly have big opaque firmware blobs that tend to suck.

While I can definitely do better in terms of adapters, it seems I am screwed with that particular MT7915 module. After studying the documentation more carefully, it doesn't seem to support 160MHz channel width, making it effectively useless for my scenario - and I can't find any reasonably priced alternatives.

Guess I will revisit the idea once the next generation RK SBCs arrive with multiple pcie slots, maybe situation with AP modules and their support improves by then...

Why don't you look at an entry level x86_64 µATX board instead (not enough PCIe sockets for mini-ITX, unless you get very pricy)? Known performance and much less adapters necessary.

Power efficiency doesn't need to be a problem with x86_64, even less in combination with 802.11ax cards (as I already mentioned, those need power and dissipate a lot of heat). It's quite reasonable to get your x86_86 below 10-15 watts (before adding the wireless cards) - many contemporary 802.11ax routers require more than that.

The size problem with x86_64 still remains - frankly even miniITX is too large for me, let alone microATX, a case to accomodate this makes the whole setup heavy. All while adapters are compact and dirty cheap.

Among x86_64, I love the idea of Odroid H2+ with H2 net card for additional 4x 2.5Gbe ports. I do not like that it has Intel CPU with no additional pcie slots, though, and is overall bulky. Sadly I can't just stick the quad 2.5GHe card into some ARM SBC, since it requires PCIe bifurcation.

I've been monitoring BPI-R64 and BPI-R2 since their release, they are very interesting boards, although not without flaws. Clearfog GT8K, while very expensive, looks fantastic with its 3x PCIe slots!

I am somewhat vary of software support for both options in the long term, especially for GT8K. After all, these devices are nowhere near popular as RK3399 boards, and RK35XX will likely be widely available and reasonably priced as well...

Nevertheless, I can easily justify purchasing BPI-R64/BPI-R2, and mod it. GT8K is probably too much. The problem of good and reasonably priced 802.11ax 160MHz AP card remains, though - unless lack of 160Mhz in MT7915AN description is just a mistake...

I've been monitoring BPI-R64 and BPI-R2 since their release, they are very interesting boards