i found about the extroot which will solve the small 8mb flash luckily the device has 2 usb 2.0 in which i can plug some usb flash memory, a usb hdd or a usb ssd for /overlay.

about the ram:
if i use like 128mb swap partition would it be okay or thngs will slow down really slow?
can i specify which apps use swap and which use real ram?
does zram help in this situation or it will just kill cpu power for nothing?

about the cpu:
how much functions can i do with this performance without getting any slowlyness or lag in network performance?
can i run openvpn with this? or i shouldnt?

i dont want to get other devices for now, i want to rely on this for most things.
i have a core 2 duo pc which i can use for networking but not enough nics only have 1 1gbit and 1 100mbit nics.
quad port gigabit nics aren't cheap

Performance wise, the W8970 isn't particularly different from other contemporary routers, it's somewhere in the lower mid range of devices I have in use. Generally speaking, and I know this doesn't sound particularly helpful: Whether or not it meets your expectations depends on your expectations, and to get a somewhat helpful answer you would need to be a little more specific in what you expect the device to do.

As to your questions: I am not sure why you want to have a 128 MB swap partition. The device certainly doesn't need it for regular routing tasks.

Yes, it can run OpenVPN, but if it does it well (or fast) enough again depends on your expectations.

I have never heard about that failure to have "full 1 GB speed", what are you referring to?

for that purpose I would use a x86-based router/device, especially for the download manager

i have a core 2 duo machine but there is no vdsl modem cards but the draytek vigor nic which is very expensive and actually a router on a card with its own firmware and web interface.

i cant get router boards because they are expensive and don't have dsl regardless of cpu arch, also they arent availabe locally.
i thought once to get a netgear DM200 but its very expensive for a 1 port router and most likely even if i flashed lede on it i will use in bridge mode to other router so i would need buy another router with wifi and a switch or use my core2duo pc with lede or pfsense and buy an access point and quad-port nic cards.

the wifi guest network addons i mean misc addons for isolation, control limiting bandwidth for each user etc i didnt research enough on what packages are needed but i know that its possible to do.

maybe i can reduce the amount of packages and use the discarded packages on another devices, can you suggest whats packages to avoid in this router build?

Let's me give you a perspective of what you can expect from this router, or others in the same range: ADSL and VDSL are no problem at all, it handles SQM fine with not a lot of CPU overhead (tested on a 50 mbit VDSL line). OpenVPN client and server are not a problem either, however, expect the CPU to max out at about 15 mbit.

I don't have hands-on experience with Adblock, but I can see RAM being an issue there, what with handling the lists and huge amounts of iptable rules (someone CMIIW). 64 MB are not horribly tight for everyday operation, but don't leave much room for memory-intensive tasks.

For that same reason, I am pretty sure you won't have a lot of fun using this router (or indeed, any small to mid range device) as a download manager. I would recommend getting an external NAS or NAS-like device for that.

control limiting bandwidth for each user (...) i know that its possible to do

OpenWrt/LEDE does not offer any facility for that, neither do any packages.

ok i think i will use it for the basic stuff then, and use my old pc for the rest

netgear DM200 but its very expensive

I don't think it is expensive.
https://www.amazon.de/Netgear-Wireless-Ethernet-RJ45-ADSL2-schwarz/dp/B01GL3YPHI

I would like to see a picture/drawing of your planed network, with encrypted router and so on.

its the same price of the tplink TD-W8970 or even alittle more expensive !

Are there any cheap low power consumption router boards out there?

LEDE Configuration encryption, is there a way?

now i will buy a tp-link router.

why do you need a router board, I thought you would buy a tp-link?

I would like to see a picture/drawing of your planed network, with encrypted router and so on.

I still haven't seen the picture of network.

just curious for the future upgrade

its very small and i have it in my head, but why not i will draw it for you. 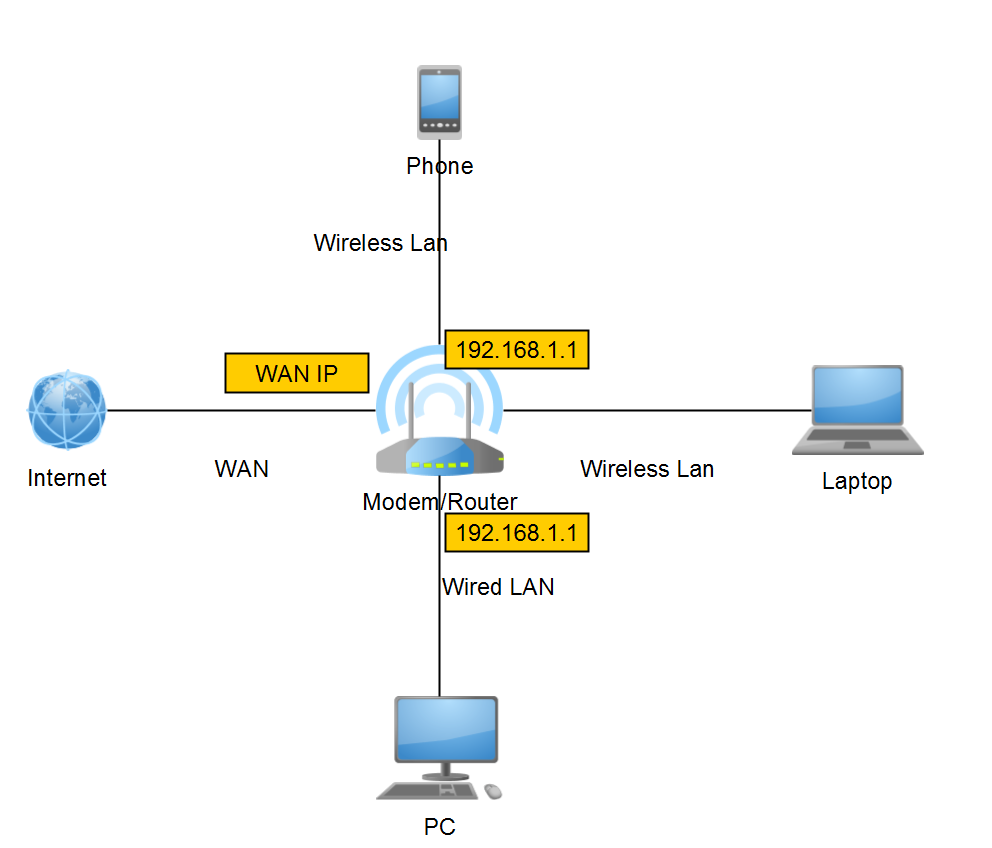 i know its very basic but you can ask for any missing details and i will add
btw if the router didnt hold the vpn i will use my old pc for vpn and add it between the main dsl router and the wired lan devices.

interesting, I thought you need to encrypt the config files of the router, because they contain the vpn stuff.

it will contain but in case it cant hold it because of the limited processing power i will use my old pc.
in that diagram the router should have vpn inside it.

hmm, I see only one wifi in the diagram.

And how do you secure the phone, pc and laptop, so that nobody can do bad stuff with it?

we can worry about the guest network later, it will be isolated in 192.168.2.0 network and allowed wan access.

how do you secure the vpn server pc against the cold boot attack?