yess it was Mac binding.
from an old setup i bind a RPI to .105 and never could remove that for some reason, and the DCHP took that 105 aggh I changed to another one and assigned to dhcp reservation list to .160 and now I have internet!!

now I will start with vpn setup.

Great!! Once the vpn is running, we will make a minor tweak to the firewall and you’ll be done!

so vpn setup done, I tested what is my ip and is correct from other country, but no internet connection while connecting to Wifi, so firewall ?

Yes. Assign the vpn to a new firewall zone.

mm but I need to create an interface before??

there is no option for vpn only for lan or wan: 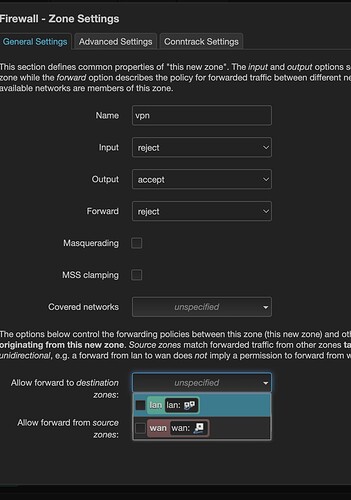 If you’re using OpenVPN, create an interface with dev tun0 and proto none (unmanaged). Then link that to the firewall zone.

Did you create a new zone for the vpn?

Yes. Enable masquerading and assign the vpn to thst zone.

I think I have it working.
I have DNS leaks base on this https://www.expressvpn.com/es/dns-leak-test
what I can do to prevent that?

I just use a known public dns and I don’t worry too much about it. Or you can specify the system dns based on the other endpoint. However, this is not trivial to set dynamically (I.e when the tunnel is up).

Hi all - I was looking at the DNS settings within Wireguard for 21.02 and it looks like DNS does indeed leak. When I specify the DNS with Wireguard on my Mac or iPhone, that DNS server replaces the other(s) that have been specified in the system, thus preventing leaks. Not so for OpenWrt, AFAICT. I've been reading a number of threads on this topic which workaround the issue by changing some dnsmasq settings (namely setting it to ignore the peer advertised DNS, manually specifying the servers, a…

Although, you’re using OpenVPN, right? You can actually add dns as a client side directive.

yes openVPN ok I will read some of those docs later.

How or why download speed is so slow with vpn on inside openwrt? is there a way that I can improve?
I tested 10cm close to the AP by wireless.
ISP Max speed 300Mb
Testing with https://www.waveform.com/tools/bufferbloat

Note: the openwrt router Ethernet has max 100Mb and wireless max 300Mb, kind of dumb, I can never reach more than 100Mb, because ethernet makes limit to 100mb (WAN connected to main router)

Not sure why I can't get more than 50mb of regular speed on the openwrt I guess the tplink router is very bad and tiny antena, was designed for traveling so its very small, I guess is because of that.. ?

Other idea that I have was to make the OpenWRT as repeater from this video https://youtu.be/928iaf374FU , so copy the Wifi from my main router and connect as client to the openwrt to then re-trasmit to another ssid and test speed with that, maybe more than 100mb I can get like that? also i can use the Ethernet port to connect to a device , I never make it work (I guess I know the issue now could be the MAC binding issue that prevent me)

mmm maybe is because of the CPU

my should be the mt7621 or close one ??? and base on the performance is about Im getting, close to 20mb
maybe with wireguard I can get more? 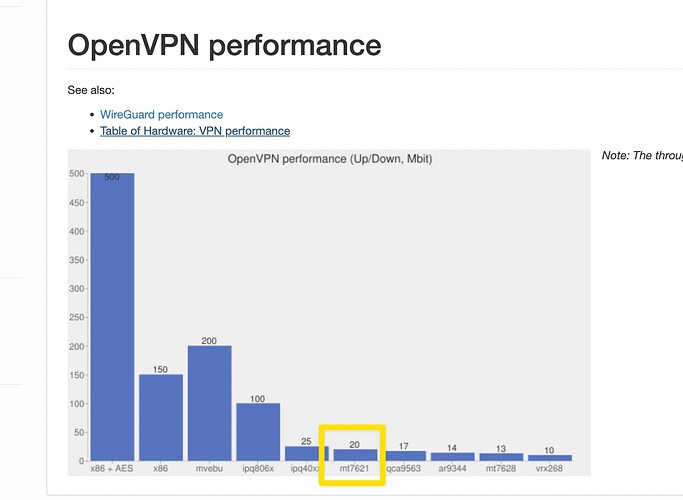 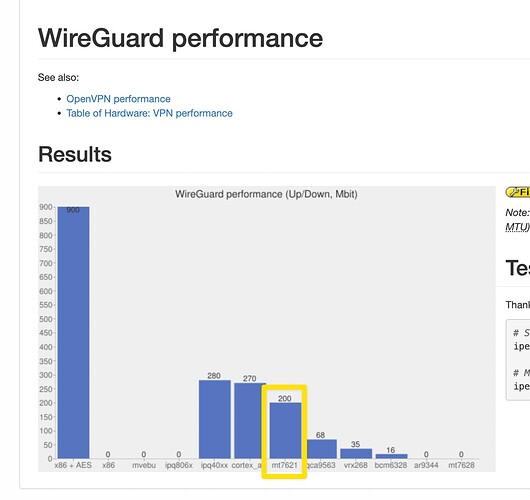 o wait is the other mt7628 and on wireguard shows 0, so it will not work? or nobody report it mmmm

How or why download speed is so slow with vpn on inside openwrt? is there a way that I can improve?

OpenVPN is an older and very cpu intensive vpn protocol. You will not be able to get faster speeds unless you get a much faster router (for OpenVPN, that tends to be in the range of x86 devices to get line rate vpn).

Use wireguard if your vpn provider offers it. Much faster!

Not sure why I can't get more than 50mb of regular speed on the openwrt I guess the tplink router is very bad and tiny antena, was designed for traveling so its very small, I guess is because of that.. ?

Don’t even bother with this device. Performance will be very poor.

is possible somehow setup the main router (not openwrt) that a specific IP device connected, goest to the openwrt router first and use the tunnel vpn and then go back to the main router and continue go out to internet? to avoid using the AP openwrt wifi for that device.
using static routing? 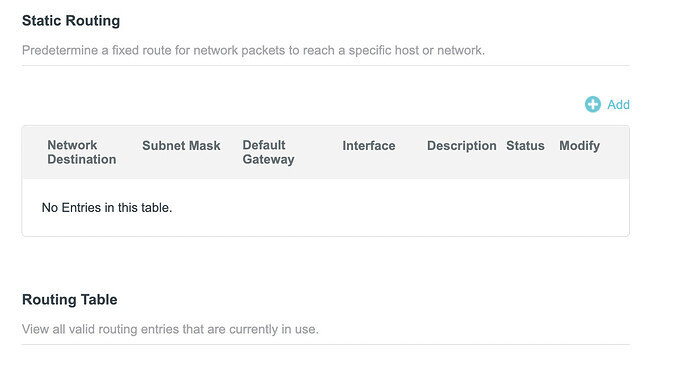 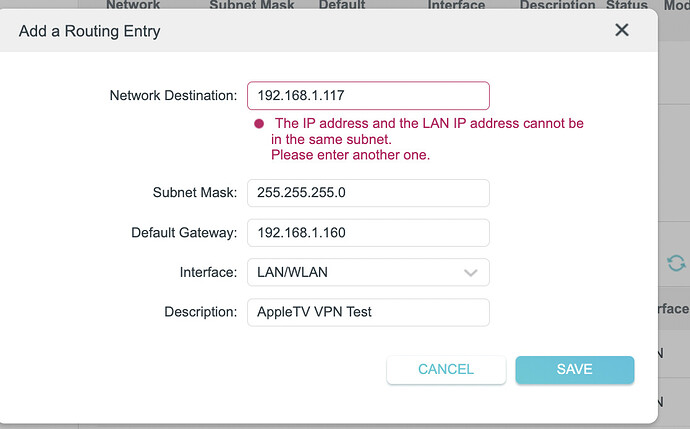 hat a specific IP device connected, goest to the openwrt router first and use the tunnel vpn and then go back to the main router and continue go out to internet?

I'm not sure I totally understand what you're asking here, but if I'm getting your thought, no, this is not possible.

Your main router would need to have a system to provide a different gateway to the device in question... most routers do not have a way to do this... it is possible with RADIUS based systems, but that is seriously overkill. Static routing is not going to help you here, although Policy Based Routing could be useful.... you'd need to connect through your OpenWrt device though, so you don't fix the issue of that being low performance even without using the VPN.