Hey guys, noob here looking for a way to reduce latency for online gaming. I currently don't have anything other than the isp provided modem in my home network. Speeds are 20mb download and 5mb upload, have 2 others in home using only wifi on ipad, iphone, and sometimes netflix through a roku. I connect directly to the isp modem through ethernet cable for gaming btw.

So I'm wondering if any of the routers mentioned above would be good at providing:

I don’t have experience with MTK-based routers, but I do have a couple of the GL-AR300M units and am impressed by the build quality and price. MIPS-based SoCs aren’t “fast” by today’s standards, but the GL-AR300M should be able to run “piece of cake” at your current transport speed.

Good to know that I don't have to spend an arm and a leg on a "gaming router" in order to do what I need. Thanks for your input jeff much appreciated!

The situation for you is rather easy and 'cheap' because of your relatively modest (by today's expectations) WAN speeds. The picture changes completely above ~100-200 MBit/s[0] WAN throughputs and SQM (without SQM and some tolerance to lags induced by overtaxed CPU cores, you can push that quite a bit further), those lines very quickly end up with highend or even enterprise'ish routing solutions (x86_64).

--
Edit:
[0] it already changes beyond ~35-50 MBit/s, albeit rather modestly compared to the big steps in the early 3-figure range.

Finally pays off to have slow internet speed

Makes sense that the requirements of the networking hardware would increase at higher speeds. SLH, If you were in my scenario with no hopes for faster speeds in the near future, would you get the GL-ARM300M as well or would you get something else?

I've been in your situation until mid 2017 (actually worse, less than ~half of your speeds with no hope for improvement ('ever') in sight - fortunately without a particular need to lag reduction, until suddenly and very unexpectedly the situation changed radically (VDSL2, FTTH maybe possible in the near future); so do plan ahead even if the future looks dire). Very personally, and without a particular regard for chasing the lowest possible lag, I do put more emphasis on preparing for the future and the longevity of my 'investments'. That means I regard dual-band support (802.11ac or better) and an expected life span of ~5 years (plus another ~5 years as cold spare/ good enough for experiments, etc.) as pretty important, meaning that I tend towards overspending slightly to get the most out of my devices for the forseable future (at least 3+ years).

From this point of view, both of your options are on the low end, with little margin upwards and with little future. Very personally, I'd rate the 50-75 EUR/ USD range with ipq40xx as the lowest 'sensible' entry level class of devices (ARMv7, multi-core, 32/256 MB, good 802.11ac radios), obviously less on the used market. Sadly when I had to take this decision in 2017 myself, ipq40xx didn't exist as a supported platform in OpenWrt yet, so I had to overspend quite a bit more beyond that, more than I would have liked (which helps me now, with a prospect of FTTH).

For the mt7628 solution speaks that you will find better routing and NAT acceleration for this SOC (which however is largely immaterial once SQM enters the picture, as this precludes offloading to a large extent), against it speaks the relatively low CPU performance and pretty spotty reliability of its WLAN chipset.

Regarding the QCA9531 solution you have less well tuned NAT/ routing drivers (no hardware offloading capabilities), but as mentioned before, this doesn't matter all that much once you enable SQM, as this will always need to take the long way home through the CPU and under its close supervision. Here you probably will profit from its (comparable, but-) slightly higher CPU performance. In terms of WLAN reliability, the QCA9531 chipset driven by ath9k is a clear winner.

So while I personally wouldn't consider either of these to be an option myself (not even at your WAN speeds), both should fill the bill for your stated current requirements and provide the necessary computing power for SQM to reduce your lag and get the most out of your WAN connection. Personally I would favour ath79 over mt7628, both because of the slightly higher CPU speed and the much more reliable WLAN support, but if mt7621 were an option on the ballot, I'd be harder pressed to come to a conclusion.

Decisions are difficult and always depend on your personal requirements.

Wow thanks for that reply. I'm going to look into that ipq40xx solution as I'm not dead set on getting one of these two items.

Edit: Learned a lot reading over the above in depth reply. Pretty much solves my original question between these two routers in question, so I chose this reply as the solution. Thanks!

Oh yeah I looked into the fritzbox or the other zylex router earlier but those are crazy expensive in Canada if one can find them.

slh, would you choose this one over the ath79 gl-arm300m?

I hate to spam the site but I couldn't find another link to post.

It's an option, faster CPU, concurrent dual-band 802.11ac WLAN (albeit not the most reliable one).

I've been trying to research the above router online and did come across a couple posts mentioning weak wifi signal. You really know your stuff so maybe you can tell me if it would actually be worse than my current isp provided modem with regards to wifi?

Sorry, but I can not find much info on this one.

Why don't you start with devices that have OpenWrt support in the first place, respectively which are supportable at all (hint, your example falls into neither of these categories).

Edit: just to avoid confusion, I'm referring to the Technicolor CGA0101 above.

Hey, apparently it is on the supported list of devices:

it just happens to be under another name.

Don't assume two devices use the same firmware just because

and that's just the start

Yeah, that Technicolor modem is what the isp has provided me atm....I have nothing else. I was thinking you'd say something like "ok if this is what you have now then anything would be an upgrade"

the best one i have seen for up to about 75-100 megabit is the r6220. you have to install 2 files instead of just flashing one and you have to log in to a special url to turn on debug mode but it was failry easy. its listed in the instructions on the openwrt website.

they are 80 bux new but ebay always has a flood of them for 20 dollars. ive bought 3 so far and all worked. cpu is 880mghz hyperthreaded and has 2.4ghz and 5ghz wifi that both work. a lot of routers you will check into have 10 different versions and you dont know which ones will work right. this router is very well supported and can be found cheap and has a very strong cpu with 128mb of ram and plenty of flash.

lol....yeah ...what a pain. Also, the thought of potentially bricking the device is in the back of my head. Makes me want to grab something with openwrt right out of the box.

But i'll be adding the r6220 to my search list though, perhaps I can find a good deal as well.

heres a good one (link below) , buy it now along with many more. 20 bux or so. not sure if you are in the states or not. if not then it may be a different scenario. but as far as i know only one version or if there are other versions they are all compatible. just go to the r6220 device page. cant recommend this one enough 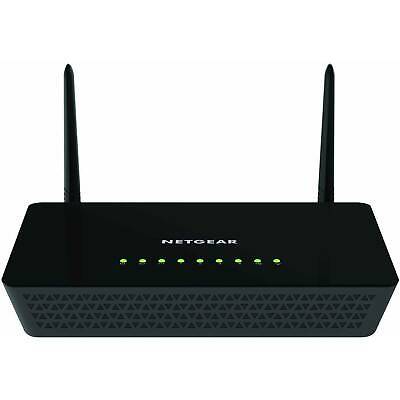 oh and when i say good for up to 75-100 meg i mean with sqm turned on, for both up and downstream. with sqm off its good for much much more or if you just turn on sqm for the upstream.

i wouldnt worry about bricking as long as you follow the directions. most come with recovery options even if you flash the wrong thing. but i have an r6220 with openwrt already flashed on it i could sell you as well. but i mean its 20 bux. youre really not losing much if it did get bricked.

Appreciate the link bob but currently in Central America for the next few months where ordering stuff from abroad has been an unpleasant experience. The local market is severely limited and overpriced as well but hoping something openwrt compatible pops up even on the second hand market.

Worse case scenario...gonna see if I can get a family member to bring me something down next time they visit. Thanks again!