I built a couple of computers a few months ago and received two free ASRock X10 AC1300 IoT routers. I have been using OpenWRT in my home for nearly a decade on the same router and would love to be able to get it on this new ASRock if possible. I have one of them opened up and it has a QUALCOMM IPQ4019.

I do not see this specific router on the csv file of compatible devices, but I am willing to try one that may work if one exists, even if this bricks this router because I have no use for either of them in this current state.

If there is any more information that someone needs me to provide for this router, I will be happy to oblige and post any success or failure I may have flashing this router. 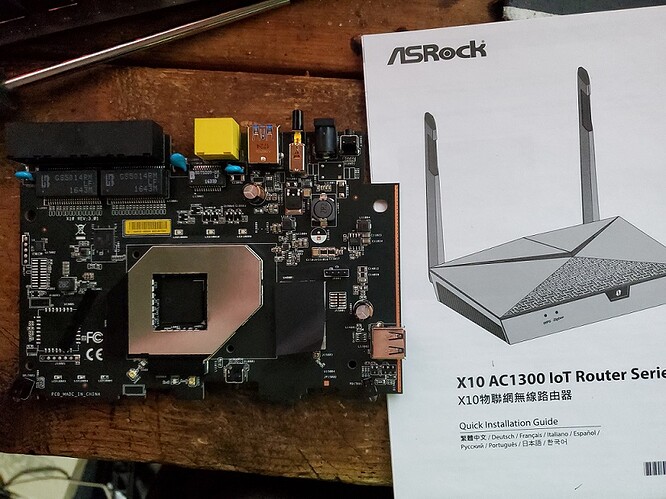 No, you can't just flash your device (that would be 100% guaranteed to brick it).

The hardware (ipq4019) should be supportable though, but you'll still have to do the porting before; serial console access would be the first part of that. In terms of image generation, you might be able to use the ipq8064 based ASRock for guidance (different SOC, different target, but vendors usually stick to their old tricks).

Interesting. This definitely sounds like a project I should tackle over the weekend. Thanks for the info.

You will need more than a weekend, considerably more - especially without prior experience.

Consider that it could be a re-badge of another brand using the same board. If you're lucky with that then there might be something that can install directly.

Very unlikely, especially with the ipq4019 chipsets (they are too expensive for the really low-end market, where you will find plenty of very similar clones on the chinese market - but not with the well-known brand names either) - at the very least the flash partitioning (and associated things, like h/w IDs, etc.) will differ, which would be a guaranteed 'killer' if force-flashed. It doesn't help that most ipq4019 boards will use NAND either, nor that there aren't that many supported ipq4019 boards in OpenWrt to begin with.