I got a couple of old Teltonika RUT-104 Boards but despite they are only 8 MB Flash / 32 MB Ram I'd like to give them a go, since they got a miniPCIe 3G/4G Port with Sim Card reader.

They should be nearly the same as the Wilibox WBD-111 - so stated in the WIKI, but something has to be different...
(https://openwrt.org/toh/wiligear/wbd-111)

The OEM Webinterface Upload does not work - after uploading only a white Page appears and nothing else, when I use the firmware-upgrade mechanism in the teltonika Webinterface, despite being a rather 'early' Firmware: RUT104_R_01.00.00

Set your PC's IP to 192.168.1.254
Open a TFTP server and place in his root the image with this name: fwupdate.bin
Power-on your WBD-111 holding reset button
Wait about a minute per megabyte (default image 3-4minutes)

That seems to work in the firstplace, since I can see with tcpdump that the request gets answered from my tftpd and lots of data is transferred and finally finished.
But after a (manually induced) reboot (after about 20 Minutes not answering on 192.168.0.1 nor 192.168.1.1) the old Teltonika OS was back again..

I did not put on the serial Port until now, because there are no pins, it has to be soldered on the PCB directly....

I assumed that my build Image
"lede-gemini-wiligear-squashfs.img" has to be renamed to fwupdate.img to be transferred via tftp - but I don't know for sure if that is right.

Can anyone give me a hint how to get openwrt or the older lede release to this device?

whack some wires on the serial pads... looks easier than most routers...

if you have an old ata cable or similar sized double sided connector... with somewhat stretchable pins...

very easy to chop and bend to slide on and off... clothes peg could work... old parallel / serial / vga motherboard sockets would work.. ( just... ) depending on your dextrose... but you'd need to dice a cable too...

just do it without power and mark / fashion a way to align it. then weigh it down with some heavy books...

all said and done solder is probably safer... for most.... ...okay, I'll do that. But nevertheless it seems running retboot as bootloader and it seems neither in the wiki nor in the searchable internet is anything about it mentioned according to this device - which is funny considering int already entered the TOH section in 2010 or so...

The other funny thing is, the 'other' wrt (dd-wrt) mentioned this device as most stable pci device, which is also pretty fast around 10 Years ago and does not even mention it on its current page..... Was this device so bad after all?

Was this device so bad after all?

a) Availability-Cost-Prevalence
If nobody has the thing, support is a coin toss

b) OEM obfuscation
If the underlying hardware or software particularly obfuscated... ( good "a" result reduces "b" )

d) Resources
Actual real world performance. Whilst we'd think that this should be a big factor... It doesn't really effect support levels much. Other than driving (a).

Summary: Solid fundamentals and availability/cost... are the key drivers for community acceptance.

I suspect your device was simply not so prevalent. Thus, development didn't "take-off" at all.

10 years is more than a lifetime for such things... Saying that, the designer of this particular device was particularly talented as seen by it's continued relevance.

Hi,
last but not least, I soldered a Serial converter to the board... But I don't get any Kernel Image + Rootfs loaded to the device because any Kernel (even from Version 15.05 ) is considered 'too Big".... The same happens with the rootfs.... every time he is complaining it's too big, but smaller than that should not be possible... even back in 2010...?!.. 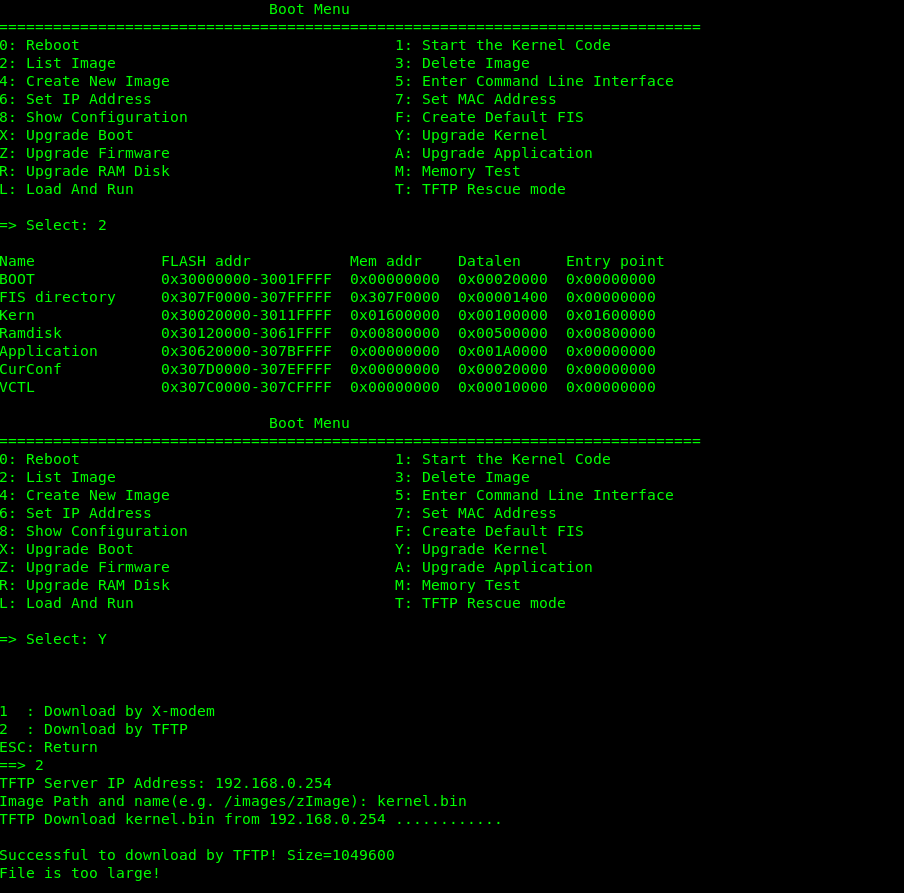 I got some experience with U-Boot, but the redboot thingie is totaly unknown to me...

Hi there... after a couple of months I started to play again with the RUT-104 aka wbd-111 but no success so far....
The Kernel is too big to get flashed in the kernel fis partition.

I have no Idea how to 'repartition' redboots FIS tables so it could fit - I only know I should keep my fingers from the boot partition where redboot resides.....

I also tried to shrink the kernel, so it is less then 1 MB... but that isn't even possible with an old 15.05 release.... so what to do? Keep the original Teltonika OS? .... though it is also an openwrt release (maybe violating the GPL) its really crap....

Does anyone have some ideas? Or is it really time for the hotgun to dissemble the device?

I also found this, where the wbd-111 is also still mentioned but that didn't help me....:

I think the FIS Partition scheme has to be adapted. but How without killing redboot (again....)