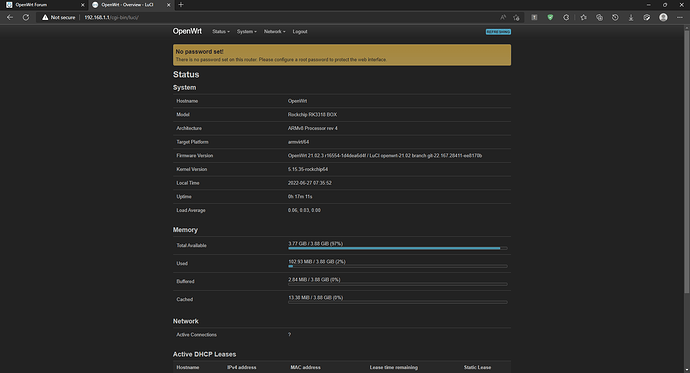 but the wifi isn't working, nothing happen when running wifi config > /etc/config/wireless

just read that wifi device of this board is Broadcom BCM4334/AmPak AP6334 - Device ID: 02d0:4334
is this wifi device currently supported in openwrt ? if so, what packages should i install ?

it's not a supported device, ask the creator of the image ?

with that said, try the brcmfmac packages.

Official 21.02 is on kernel 5.4 so you are running something completely unsupported.

i have some armbian images that support this board with different kernel, one of them is kernel 5.9.0

i have tried kernel 5.9.0 and running iw does return some output, while in this kernel not

The wifi does work when booting armbian, but not when booting openwrt, i would like to know how to make it work in openwrt.

but not when booting openwrt

You are not booting OpenWrt. Again: you are using an Armbian kernel, and it is the kernel that provides the drivers. Talk to the Armbian guys, or test a full OpenWrt image including an OpenWrt kernel. Only then you will be able to say 'it does not work in OpenWrt.'

Yes, they matter very much if you want to connect a device to the internet. Here you can see the Versions you can connect to the internet at the time of opening the website that lists the numbers: https://kernel.org/