Just wanted to post to express my appreciation for the SQM packages and the great wiki entry describing how to enable the bufferbloat fix. I followed wiki's to setup and tweak the download/upload to the max tested x 0.95. That's it, from F to A+ in 3 minutes of work. Great job!

I followed the instructions and mine became much worse:

Overall B
BufferBloat D
Quality A+

Overall B
BufferBloat A+
Quality D

What did I miss?

I stopped and tested speed again, and it is back to normal. 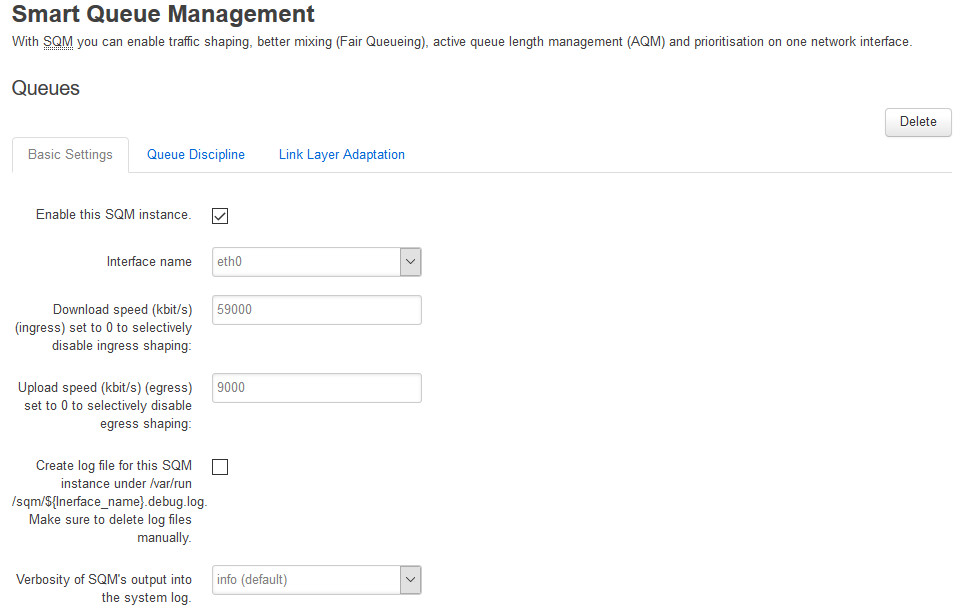 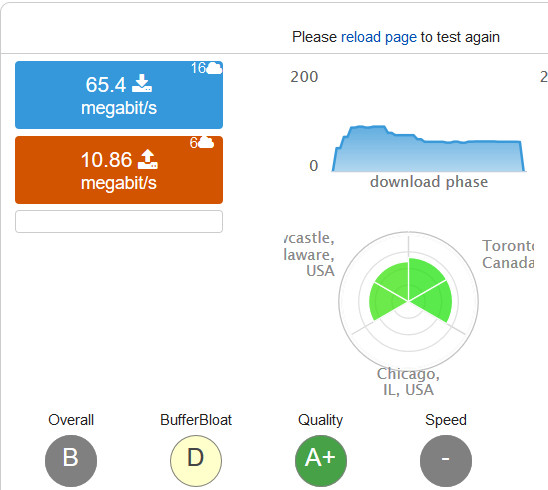 After I install and enable: 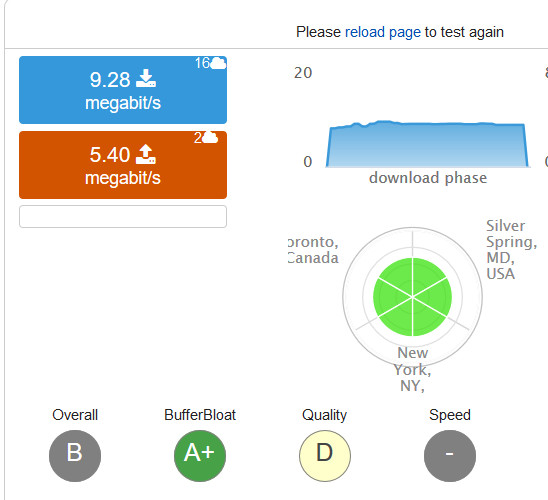 Looks like mine... before, using http://beta.speedtest.net/ I was getting about 90 Mbps down and 12 Mbps up. My settings are 85500 for down and 11400 for up with the same queue discipline settings you have. Not sure why the differences.

As a test, try setting download speed to 0 and keep upload speed at 9000.

Finally what router are you using R7800?
Thanks in advance.

Thanks for the help.
I am using TP link C2600.
I think I made a mistake last night by testing using LAN connection. I switched to WIFI this morning and it is much better:

Before I enable sqm: 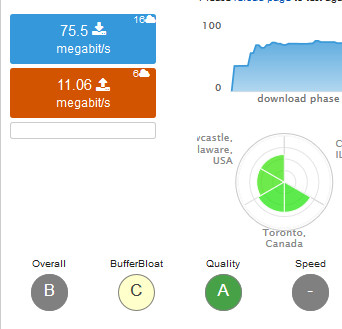 After I enable sqm: 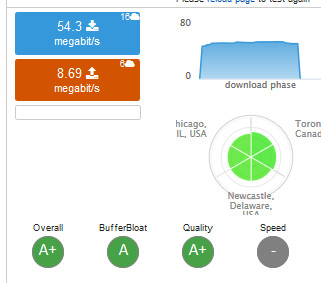 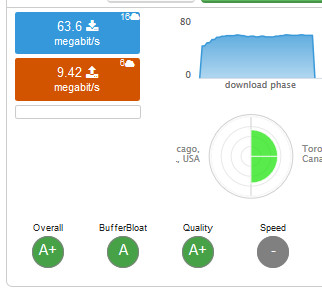 So it looks much better now. Will WIFI user experience be a lot different speed wise?

I still would like to see your /etc/config/sqm and the output of "tc -s qdisc" otherwise I will just be guessing. BTW the shaper affects gross bandwidth, while a speedtest typically measures HTTP/TCP/IP goodput so you will never see the shaper's bandwidth in any reliable speedtest. Depending on the encapsulation and specific overhead you can expect (example calculation for DOCSIS):

Thanks moeller0.
I am primarily a Windows user with very little knowledge on other things, so I am not really sure how to get those things you are asking for.

eth0 is probably the wrong interface. Try eth0.1 or some other one.

I checked and it shows eth0: 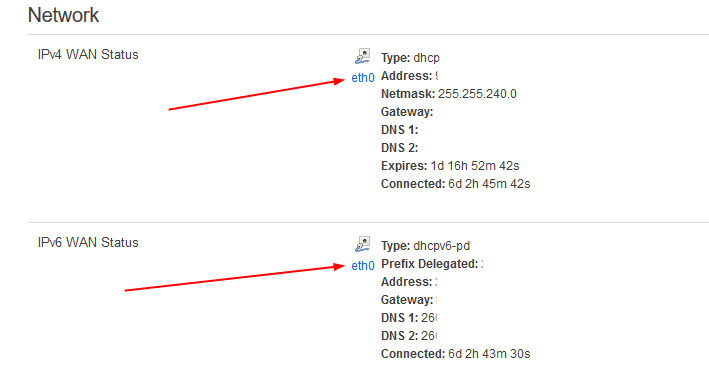 But since the new speed test looks good, is there still anything I need to worry about?

I am primarily a Windows user with very little knowledge on other things, so I am not really sure how to get those things you are asking for.

Ah, have a look at https://www.turris.cz/doc/en/howto/ssh for instructions how to use a ssh terminal to access the router's command line; then issue commands 1. 2. 3., do a speedtest and then issue command 5.
BTW here https://forum.openwrt.org/t/sqm-qos-recommended-settings-for-the-dslreports-speedtest-bufferbloat-testing/2803 are some recommendations for configuring the dslreports speedtest better than its already decent defaults and how to best report the results.

if it's working fine then never mind.

I remember having issues where I selected eth0 in SQM with terrible results whereas changing it to eth0.1 fixed everything. I think it depends on the router and whether or not the WAN interface is part of the switch.

I remember having issues where I selected eth0 in SQM with terrible results whereas changing it to eth0.1 fixed everything. I think it depends on the router and whether or not the WAN interface is part of the switch.

Well for routers that have a single CPU-to-switch port and use two VLANs to separate WAN and LAN functionality, setting up sqm on the non-MVLAN interface will result in WAN-to-LAN traffic being shaped to the minimum of the specified bandwidth, but that minimum will apply in both ingress and egress direction. Which is quite logical i one starts thinking about it; each packet from WAN to LAN will cross the underlaying interface twice once in ingress and once in egress direction and hence the oberserved shaping to the minimum is what one should expect. Doctor it hurts when I instantiate a shaper on the "raw" interface used to carry two VLAN interfaces with inversed directionality. "Don't do that then." But I digress...

I don't get it.
If WAN is eth0 when SQM should be set for eth0, right? 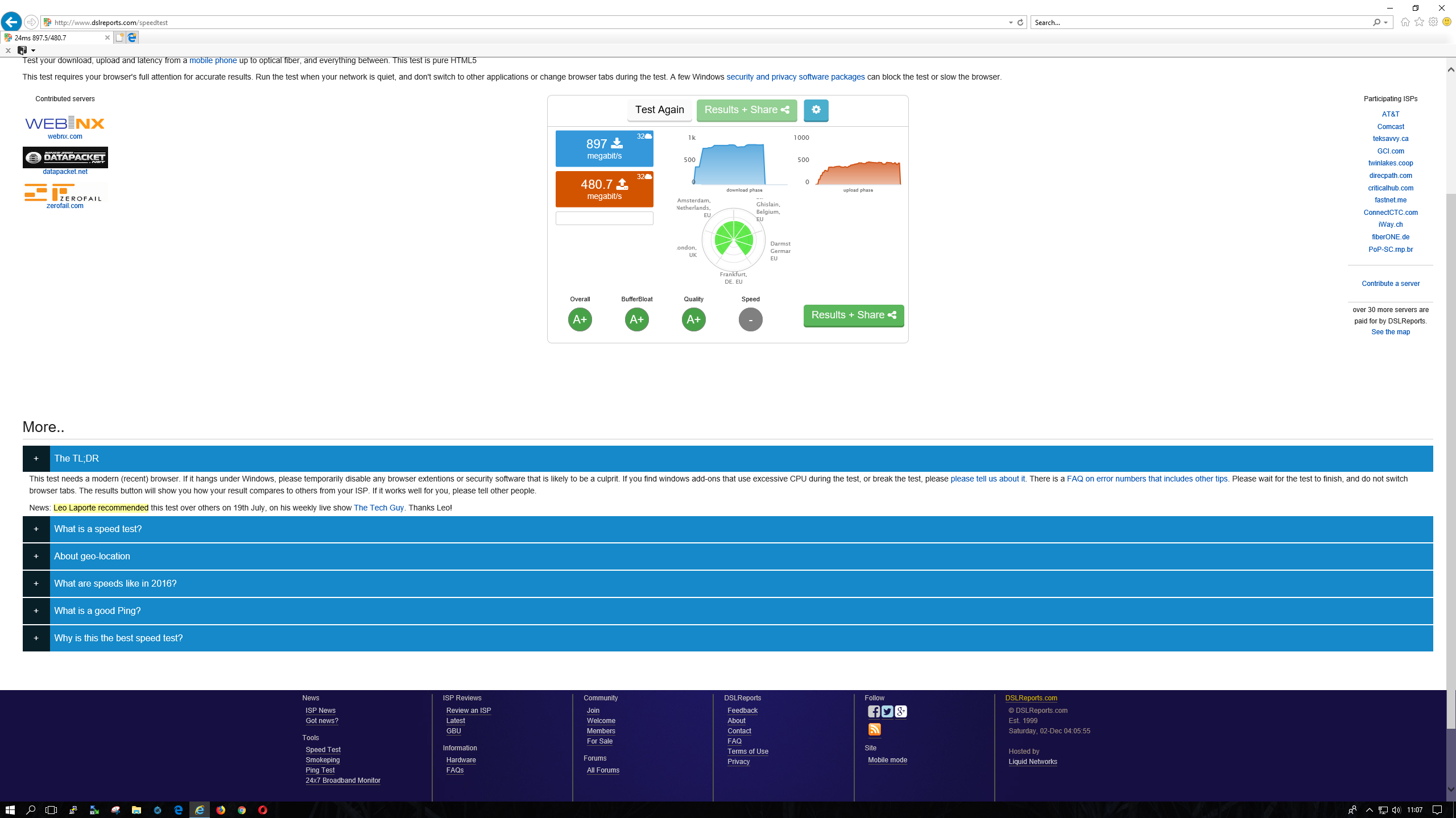 I deleted this response since it is no longer an issue.
Thanks.

Yes that we I read from the Youtube tutorial:

On what device are you running theses?