hi everyone.
im trying to install pyshark in LEDE 17.01.4

and now i'm in trouble

while install pyshark i use this command 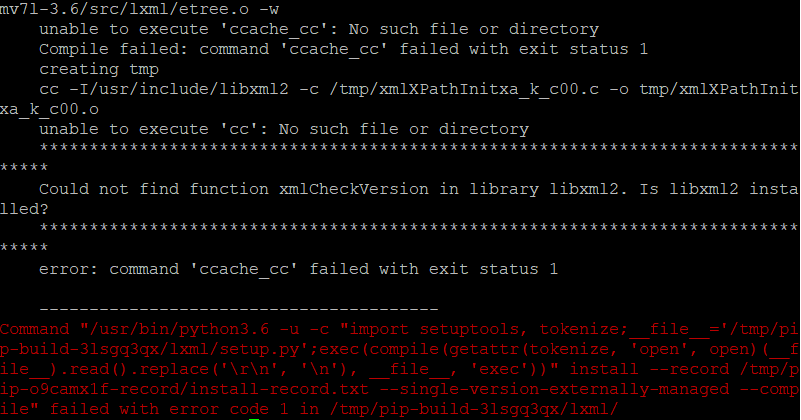 so i'm trying to install ccache to source code

pip is mainly OK for "pure" Python packages. I say "mainly" as it doesn't appear to properly support venv-target installs on OpenWRT.

Building on the OpenWRT box, unless an x86 with sufficient memory, is likely to be anywhere between frustrating and impossible.

The suggested approach is to build it as a package in the same cross-compile build environment as you build OpenWRT images.

Here's an unresolved thread on an attempt to build numpy on the OpenWRT device itself. No word if the OP every got any further.

Install numpy on LEDE 17.01.4 For Developers

As a suggestion for the future, posting terminal output and code using the "</>" button (preformatted-text Markdown) makes it a lot easier to read, as well as to copy/paste from.

now lede running in the raspberry pi 3 as main os

so you say
"build it as a package in the same cross-compile build environment as you build OpenWRT images."

i can't understand well...but you mean when install LEDE image to raspberry build pyshark package too?

Depending on what you want, tcpdump may already provide it. The tcdpdump-mini package is sufficient for most needs. You can even send the output of tcpdump over ssh to, for example, Wireshark running on your "desktop".

A "raw" socket in Python is another option that does not require a compiled Python package.

If you want to compile PyShark, then you would need to create your own build environment, then a wrapper for the package itself, and compile it on another machine running a flavor of Linux. Then install it on your OpenWRT device from there. If you want to pursue that, once the OpenWRT DNS settles down, you can look at the Documentation section for Developer. I'd link it, but right now can't easily access openwrt.org sites.

You can also install softflowd if you have a server running a Netflow-compatible collector like nfsen or Ntop. This can be used if you don't need to record all data inside the packets.

thx for your reply
as you said tcpdump and python raw socket will good way to packet capture
but i still want to install pyshark..... because i think your suggestion is hard to try to me
so is there no way to fix gcc error?
i want to fix gcc and setup ccache