I am running the latest openwrt on a wrt3200acm router with a standalone ap.

So far so good.

Now i wanted to add a VPN connection using nordvpn i followed this youtube link https://youtu.be/pZN4XusnwSw

I did the .auth, interface and firewall section.
At this point everything is good.
But then i wanted another vpn connection and uploaded a second configuration file on openvpn.

Perhaps you could explain how you want it to behave, and someone will help you configure it accordingly.

I want multiple VPN connections, with multiple interface threw it.

If i make 1 VPN connection everything is good, i got two interface using it,
But when adding a second VPN connection trouble begin with strange problems.

You need vpn-policy-routing. Without helper programs like that the plain Linux kernel doesn't have a way to handle two WANs. 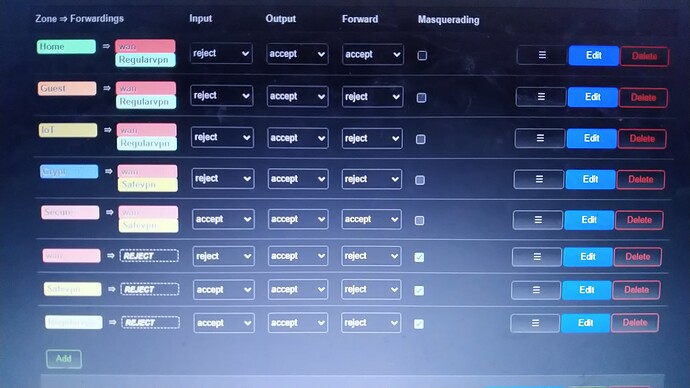 Those red arrows needs to be that up address except it are the blue ones.

And with the red SSID'S I don't get a connection except if I stop and enable the von connection in openwrt. 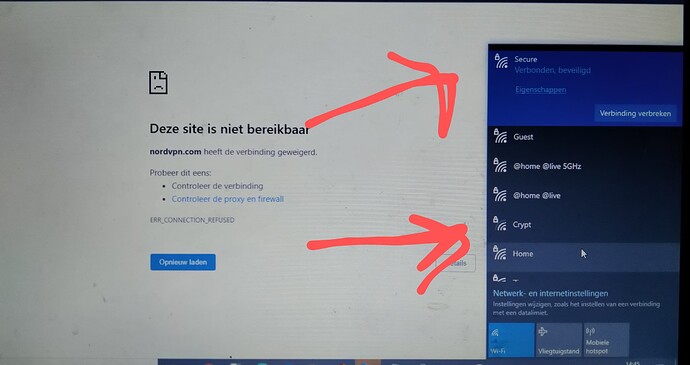 I don't now why the interfaces are changing from te vpn connection.

I made some pictures to explain it better

You need to disable or forget networks that you don't want Windows to try to connect to. That is purely a Windows issue.

Those connection will not autoconnect if i start/stop in OPENWRT>VPN>OPENVPN the .ovpn files i get different results

that have nothing to do with the issue at hand.

Win tries to find a wifi with internet connectivity, if it doesn't, it disconnects and moves on.

This has nothing to do with windows, maybe it is confusing using photos with windows on it.

wow, that's not a contradiction at all ...

the problem is your VPN, not windows, right ?

Again if you want the effect of two routers in one box you need helper programs like vpn-policy-routing to set up filtering and directions in the kernel for some users to use one default route and some to use another.

By default the OpenVPN client sets up to default route all Internet requests through the VPN tunnel, as it is assumed that only one instance of the client will be running. Starting a second instance will cause a breakdown.

The firewall forward rules only define which paths are allowed to route. The routing tables say what will actually be routed.

Indeed the problem is the VPN, i would like to make a sreenvideo it will explain more, will this be usefull?

The interface connected to the vpn tun. interface are changed from the .ovpn file or something like that

Great do you have more information how to setup (noob) and use vpn-policy-routing?

I found this article https://docs.openwrt.melmac.net/vpn-policy-routing/

I found this article

Thanks, could you better explain this maybe a noob guide?

Also why if i click the stop button, both vpn's stops and when i click start again the other vpn start but not the vpn that where the button belongs to?

I did this in the firewall nat rules is this what you mean, also this doesn't work either 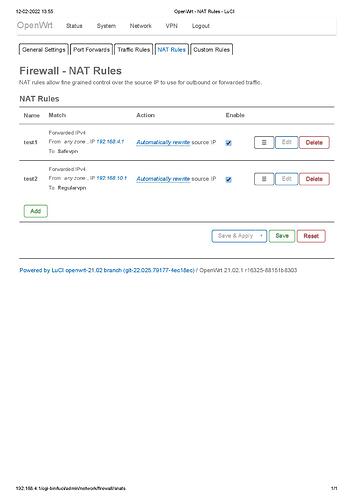 Thanks, could you better explain this maybe a noob guide?

You will probably get better support if you try to follow the current documentation and ask specific questions, rather that ask for yet another guide tailored to your needs.