so from what I read, with a DSL connection, one either needs a "real"router or an adapter to use a normal Computer as a OpenWrt Box. Since I generally don't like the idea of having another router in bridge mode(Since I could just use that as a router), I'd like to use an adapter. So now my question is, which adapter would you recommend? Or is this not possible or is there an easier solution?
P.S: I do already own the ThinClient, so that's why I'd like to use it.

or is there an easier solution?

That would be the router...

There was a time when one could buy true DSL-modems that spoke DSL on one side and e.g. USB on the other, but these times are long gone and almost all DSL modems are real Linux computers that expose more or less of Linux capabilities, most actually include full WiFi router functionality.
Some are rather odd hybrids like the https://www.draytek.de/vigornic-132-serie.html which implements a full DSL router in the form factor of a PCIe card...

Only price I could find is 150$, that plus shipping from the us... guess that sucks, but then prolly just need to buy a router

Ig I can get some recommendations around here? Also, these probably couldn't used as a bridge & access point as the same time? Sorry for the noobish questions

Also, these probably couldn't used as a bridge & access point as the same time?

Only data point I have is that my BT HomeHub 5A that I operate as bridged DSL modem (running OpenWrt) shows 100% load when I saturate both down- and uplink at the same time, leaving no CPU for e.g. AP duties. Configuring to do both bridged modem and AP however should be doable (but as I said it is not necessarily an idea worth pursuing).

In the odd and obscure department there are also DSL routers that "hide" inside SFP modules but these tend to run pretty hot and you would need a router with an SFP-cage.

But really just get a second hand dsl router that can be configured into bridge mode and you are off to the races...

Aight, so heavy lifting should just all be done by the openwrt box? Assumimg it can actually be an Accesspoint (mainly for other APs to connect though.

Heavy lifting for a VDSL connection is particularly the PPPoE overhead, routing and NAT'ing of the connection (as well as sqm/cake, VPN, etc., if you choose to do that). The modulating/ demodulating side itself is mostly done inside the modem chipset itself, in hardware (that isn't true these days anymore, but the modem firmware is still offloaded into the modem asics).

While I had 'real' internal (PCI and USB) xDSL modems up to ADSL1 times, they weren't great back then either - and today they (almost) no longer exist, and if you find them, they're mostly fake (as in a normal router just bolted onto a PCIe card, just providing it with power and a ethernet card to the 'full plastic router' without a case) - giving you less access to the modem than you'd usually have with more common external xDSL modems (less flash/ RAM, worse firmware support (basically none for the SFP adapters), very limited modem configuration options, other 'fun' issues).

If you have enterprise expectations, ZyXEL and Draytek modems (no wireless, DSL-in, one or two LAN ports out, no phone features, etc., but plenty of detailed configuration options and regular firmware updates) would be the go-to candidates - but there are plenty of (cheaper, especially second hand) options among the ISP branded devices which (sometimes) do allow pure modem functionality as well. While ZyXEL/ Draytek will give you more access to all the pesky little details of the connection, you also need to configure them correctly - the cheap (ISP branded) stuff gives you much less of that, but is easier to set up - and might work just as well (ISPs tend to trade maximum performance for fleet stability - even if you might not like their braindead firmware GUIs).

OpenWrt on the supported lantiq SOCs in bridged modem configuration has also worked pretty nicely for me.

There is such "magic" device called ZyXEL KEENETIC PLUS DSL . It's USB2.0 adapter for ADSL2+ / VDSL2 network and look like that: 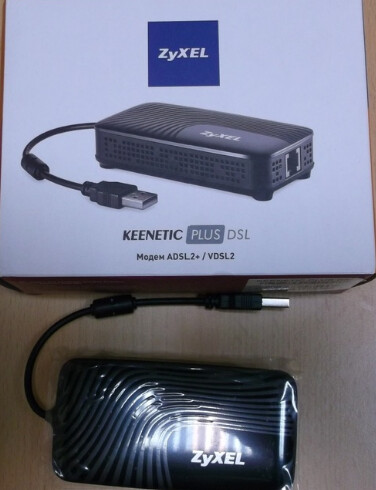