Does anyone know an update on this issue?

I did some tests today trying to solve some WiFi issues and found that I simply have the same problem on an 860L on the 5GHz radio.

Tried the magic rollback to stock firmware, go back to LEDE, as described earlier in this post, but that did not improve my situation.

I am sadly back on stock firmware now. WiFi throughput is fine now, but the situation is sad: Stock FW only has 5 wifi channels in 5 GHz (LEDE 20!), it's a 2 year old firmware and I miss my custom packages

According to https://forum.openwrt.org/viewtopic.php?id=64333, DD-WRT seems to not be affected by that issue, so I might try that, yet dd-WRT does not seem to have custom packages.
.

try this Optimized build for the D-Link DIR-860L for me solved everything except 2.4Ghz disconnection issue of lede

Thanks. I'll come over to the other thread. Seems more reasonable to continue there.

In case someone else stumbles into this thread:
I applied the LEDE snapshot developer release from 2017-08-26.
This seemed to have to solve the issues, at least for the short time of 2h that its running now.

I had some minor issues in the first 10 minutes though: the 5GHz wifi would not come up at all when being started, only the 2.4 wifi. Several reboots with mostly random WiFi config changes later it would suddenly work flawlessly.

So when experiencing the same lagging 860L wifi: either wait for the successor of 17.01.2 or use a nightly snapshot for the time being.

I do not experience problems on 2.4 WiFi (I'll post in the other thread, in case someone is interested into following that)

Is there actually a way to tell if LEDE is currently busy checking for radar?

@alexmow it can be seen in the system log

Hi, i have solved 2.4 GHz performance problem by changing the poor antennas integrated with these:
https://www.aliexpress.com/item/1pcs-Dual-Band-Antenna-Laptop-Wifi-Internal-Antenna-8dbi-for-Pcb-Network-Card/32788264214.html?spm=a2g0s.9042311.0.0.1e824c4dJtOaJr

First of all, I no longer have disconnections and speed is always constant with many connected clients.
It looks like another router!

Installation is very simple just use a drill with tip for wood 6.5 mm

As said if you do not want to hole these are better but I did not test them
https://it.aliexpress.com/item/1pcs-Dual-Band-Antenna-Laptop-Wifi-Internal-Antenna-8dbi-for-Pcb-Network-Card/32788264214.html

Interesting. Did the speeds increase as well?

Very much and now the transfer is always constant!
The problem with this router is the low quality integrated original antennas.

Is you have problems read also this:

Wireless Witch: The Truth About USB 3.0 and Wi-Fi Interference

Concerned about the USB 3.0 port on your router and wireless interference issues? Get the facts.

Has anyone tried latest lede 17.01.3 ? have the issues with 5Ghz fixed? do we have a normal router now or keep the factory FW?

I have no problems with 5 GHz and is also stable with 2.4 GHz

The release branch uses a fairly old verison of mt76 whereas trunk uses the latest one although mac80211 got bumped recently so there may be some issues left.

From own experience with the 860L:

Just to point this out: The snapshot branch correlates to a next larger LEDE version (probably 18.0 or 17.2, but not to the next 17.01.x patch level).
Any current 17.01.x patch version is not created from the current snapshot, but from a backport of a small subset of that features.

E.g. the release versions of 17.01.x still use kernel 4.4, while the current snapshot version (while I am writing this) relies on kernel 4.9. I guess the developer want to give it some time, before releasing that, might be released as 17.02 or most probably more like LEDE version 18.0, but I don't know details about this. You may need to ask the core developers for further prelease planning of this.

I would not expect the 860L WiFi driver fix to appear in any 17.1.x release. For now you will have to stick to snapshot versions for that fix.
Any bugfix released as 17.1.x will also be contained in the daily snapshot version, but not the other way round.

Also note: The 860L relies on a Mediatek mt7621 (chip which is also used in devices of other vendors), the same bug may also appear on other devices as well that use Mediatek mt7621 in LEDE 17.01.x.

Easy workaround:
Try the snapshot in the meantime, it runs flawless, I am having no problems, you just have to manually add LuCi GUI installation.
Whenever a new 17.01.x patch version is released, just update to the most recent snapshot 1 day later, to keep up with important security fixes. Do this workaround until the next larger LEDE release version (probably 18) is released.
Good thing about running snapshots on the 860L is the 860L-built in recovery mode: firmware flashing effectively cannot kill it, making flashing a riskless operation on the 860L. So in worst case you will just have wasted some time.

The real problem of this router are the poor internal antennas.
After having changed the router it is very stable on 2.4 and 5 GHz also with 17.01.4

Such a pity. The device is so amazing otherwise. If you ever have time for a quick & dirty step by step guide how you modded yours with external antennas, I think a lot of people would be very interested in reading it

Can anyone else get wifi as wan to work with the wg3526?
I get good pings and upload but .01 mbps downloads. And if I try to get the wifi from the w3526 and use it as wifi as wan on a different router I get the opposite, ping and download is fine but upload is .01mbps

I can second the poor quality of the internal antennas of the DIR-860L.

Lots of disconnects. Wifi speeds on 2.4GHz dropped under 1 megabit/sec, and on 5GHz under 10 megabit/sec. Before that it was 25-30 Mbps and 35-45 Mbps respectively. Speed through ethernet was fine.

Then I found this thread and opened the unit. It has 2 small internal "smart" antennas. The one on top had a half severed cable, probably nicked during production. So today I decided to replace both with 2 external 5dBi antennas from Ali Express: 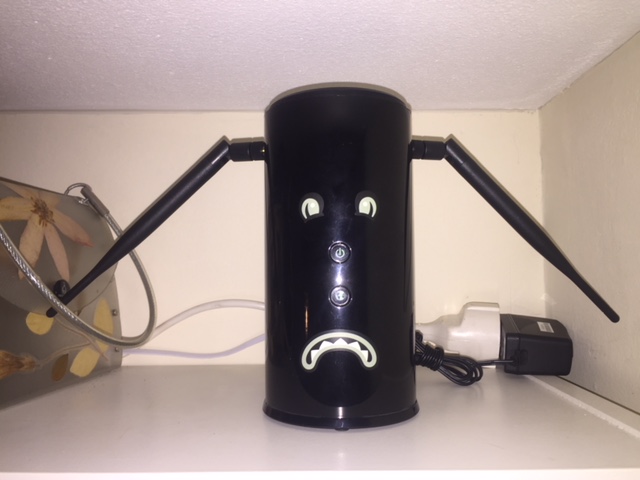 And lo and behold: The wifi speed is back to normal. So thanks for the tip!