Device upgraded from 19.x to 21.x loses settings on every restart

After upgrade I lost control over the device (was configured as a dumb AP) so I teared it down and entered failsafe directly wired to my client. I put firstboot in the ssh console while in failsafe and then rebooted.

But then I configured it be used as a dumb AP but when I power cycled the device it reverted the settings back (even saved & applied successfully before!)

I then did it again, set it all up saved & applied settings with success and used restart in luci

back on default! Why?

Did it a third time now:

And after restart it just comes back with defaults, dhcp enabled, restored wan interfaces etc.: 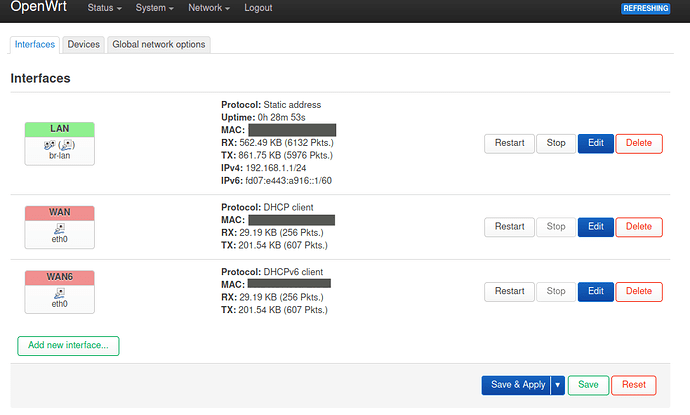 The flash could be full. That device only has 8 MB and more than usual is set aside for OEM partitions (384K) Are you trying to install any packages?

On the clean firstboot, before changing anything, check the free space under System--Software. If it shows a remarkably large amount (half of the RAM, or about 30 MB), the overlay has been mounted on RAM due to a problem with the flash.

On the clean firstboot, before changing anything, check the free space under System--Software.

Actually I did the same now on my second unit and it behave exactly the same. I quite sure it's no hardware fault, the units provided the area with wifi till I took them down 2 hours ago....

That device only has 8 MB

Many of my device only have 4MB actually

Are you trying to install any packages?

no packages installed. I really just wanted to configure the freshly upgraded and to defaults reset device to act (again) as a dumb AP.

It all worked flawlessly with 19.x on both units - now both units kill my fireabend

When I entered the failsafe I did this:

Anything I can check if flash is working normally or anything else?

make sure you installed the correct file
this maybe due to installing the initramfs file
as it's meant for ram only it will not save to flash
make sure you flashed the squashfs-factory.bin

make sure you flashed the squashfs-factory.bin

I flashed openwrt-21.02.2-ath79-generic-tplink_cpe210-v1-squashfs-sysupgrade.bin via luci (openwrt 19.x) and even compared the sha256 sum's after uploading. It was all correct and plausible 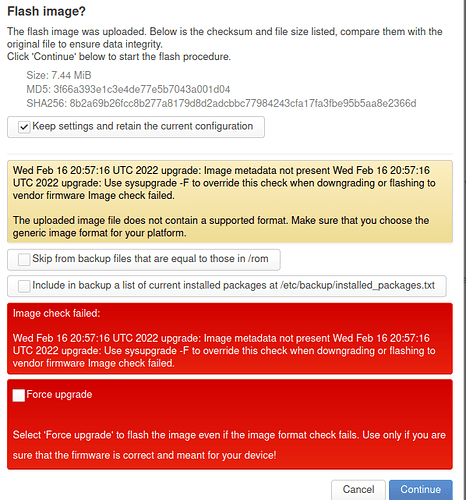 not sure if something changed in the newer version or if this indicates I have broken installation or something. Actually it's indicating it could be just because I want to downgrade....

Back on openwrt 19.x and the device is able to save settings again

Back on openwrt 19.x and the device is able to save settings again

Also now that I flashed with my client directly connected to the device it also rendered the device unusable again (like when it was remotely installed) and I needed to activate failsafe and do a firstboot to "recover" it into a working state.

Make sure to uncheck the "Keep settings" box any time you change between 19 and 21 in either direction. The settings can't be transferred, you will need to configure the new install from scratch.

Make sure to uncheck the "Keep settings" box any time you change between 19 and 21. The settings can't be transferred, you will need to configure the new install from scratch.

Now that I have my first of the two units working I just downgraded the second one from 21 to 19 without unchecking that box.

Now there is only the power led on and all others don't do nothing (the flicker when booting etc.). I also can't access the device anymore, failsafe doesn't work ether...

So do I have a bricked unit now?

Yes if the LED doesn't blink in the OpenWrt pattern when booting, it is bricked. You've probably done something like force in a factory image where sysupgrade was called for. The OpenWrt kernel isn't starting at all, so a bootloader based method like TFTP recovery will be necessary.

Lucky me, had it plugged in now for a long time and suddenly it showed the eth0 led and actually works. So now from 19.x again to 21.02.2.

Actually what I did before it magically came back was to keep the reset pin holding for more than 12 seconds when plugging in power. I remember the former owner told to do than before I could set up the devices initially.

I had this problem also when going from a 21.02.x to another 21.02.x snapshot, and eventually realised the problem was due to the fact that every new flash alternates between data partitions for settings. So when I went from 19.x to 21.x I took everyone's advice to not keep settings, that was successful.
But when a few weeks after trying another snapshot, I ticked the keep settings, which effectively copies current settings across to other data partition which was still formatted for the old 19 x system, and something about the formatting (compression from memory) is not compiled into the new kernel (as seen with dmesg looking at in early stages of mounting data overlay partition), so it cannot mount that partition any more.
The solution was to flip back to the previously loaded snapshot and take a backup and choose option not to keep settings which will do a format of the new data partition, or work out which mtd is the second partition and kill the formatting on it so it can be rebuilt properly on first boot after the flash (Linksys WRT1900ACSv2 fyi).