Creeped out by appended ci.south-bend.in.us

I've used OpenWRT for some time now, but I never encountered this:
I set up my Gl.inet 1300 as a repeater: Connect to my Wifi via 2.4 GHz and open a wifi at 5 GHz.

Now every device that connects via the 5GHz network gets appended a IP-Adress.ci.south-bend.in.us
It seems to refer to a city in the United Stated of America - but I live in Austria, far away.

Does it maybe have something to do with my creative choosing of an IP Adress? I chose 65.43.2.1 for the router and 65.43.2.* for every connected device...
Can someone please explain why the city shows up? I'm a little bit scared 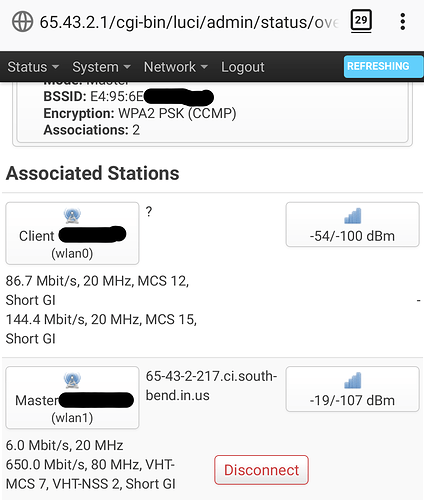 Does it maybe have something to do with my creative choosing of an IP Address?

You should choose a proper private IPv4 network range.

For IPv4, devices in your network get private addresses, and will share the same public address given by your ISP.

Totally understand. But can you tell me, what happened?

You used public IPs, belonging to AT&T, apparently physically located in South Bend, IN, US (one would guess, based on the name).

and reverse DNS on them naturally looks up the public name.

As an aside you wouldn't actually be able to connect to those servers in South Bend since the IPs are defined on your LAN instead. This is overall plainly an improper networking practice.

I know it is improper - but knowing that I will never need to connect to South Bend servers - are there any dangers involved using it?

This can be a major DC gateway or a CDN node.
But no one can stop you from shooting yourself in the foot.

I will never need to connect to South Bend servers

how would you know ?