I want to do a full backup of my router Linksys WRT1200AC V2 .
cat /proc/mtd show me 10 Partitions .Which partitions do I have to take?
And then root@OpenWrt:/# cat /dev/my mtd number > /tmp/image.bin
Sorry,for my bad English.Google-Translate works for me.
Or is better i am using the Image Builder ?
It is a NAND Device...... 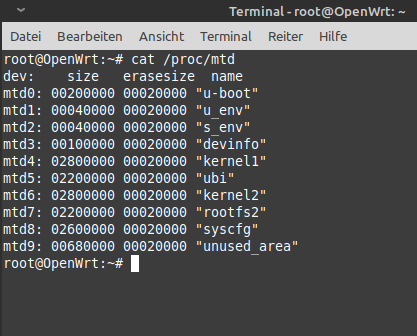 Which partitions do I have to take?

Or is better i am using the Image Builder ?

I would suggest either using the standard backup process (which will backup your config files and any other files/directories that you include in /etc/sysupgrade.conf (you will need to reinstall any user-installed packages) or using the image builder to make a custom image that includes all of your files and can also have all the user installed packages included, too. Cloning the raw storage is more complex, and it is more error-prone when attempting to re-write the data later.

OK, thanks, I'll try the Image Builder.
Many greetings - Martin

This will be helpful for me also, I uploaded a backup but al of my installed packages are gone.

I see on the wiki this will be correct and you can add or remove packages in configuration/open list.

But how does this works?
I like to make a backup with my packages but how, is there a guide step by step?

I found this Backup from LuCi including added packages and their configuration? - #4 by hnyman

This will be helpful for me also, I uploaded a backup but al of my installed packages are gone.

In general, this is expected behavior. Creating a clone of the entire memory will obviously have the ability to restore things exactly to the state of that clone. This is useful to get back to a known state (especially if you mess something up of have some other type of issue like a hardware failure and then replace with an identical device). But it doesn't help if you are resetting to clear out packages that you don't want or to reset bad settings since you are literally restoring everything exactly as it was. It also will help with sysupgrade, and you likely won't be able to read the files normally to use as a reference if you are ever manually rebuilding your settings.

Custom images can be useful for a lot of people, as can the attended sysupgrade process. Here is an answer I wrote in a similar thread.

This is normal and expected behavior. "In particular, any manually installed software packages you may have installed after the initial OpenWrt installation have to be reinstalled after an OpenWrt upgrade. That way everything will match, e.g. the updated Linux kernel and any installed kernel modules." Unless you build your own images (using the image builder, online image builder, or using the attended sysupgrade system), you will have to reinstall your packages.