With an ugly side-effect: Place your mouse on the table and see what happens…

Yes. I reverted it.

[updated] Also on the Archer C7 page, I noticed several things in the "Installation" table:

I don’t know how to fix this globally - where is it most effective to change the definitions?

The dataentries.
Still on my to do list, but I think I can manage the update during the weekend.

Regarding headers: They can be chosen as we wish.
How are we refering to them in everydays communication, firmware, or image, or...?

Although I know that it is a firmware, I would download and flash the image to my router.
But that's only my personal, non-native speaker preference.

The dataentries.
Still on my to do list, but I think I can manage the update during the weekend.

Regarding headers: They can be chosen as we wish.
How are we refering to them in everydays communication, firmware, or image, or…?
e.g.

Although I know that it is a firmware, I would download and flash the image to my router.

? Since we're the arbiters of style, I say we decide on our preferred wording and adjust all the "official" places to be consistent. (Obviously, we'll leave big hints that firmware == image in several places.)

But that’s only my personal, non-native speaker preference.

Ermm... Your "ear" is extremely good. Don't sell yourself short. Thanks again.

I have been horsing around with the <tabbox> method to display all the data collected by the data plugin/dataentries.

I like it because it's a compact and consistent way to display the most important information from about the device. I took the liberty of converting two Device Pages to use it:

The tables aren't in their final form, nor do they use all the fields that @tmomas is working on in the merged wiki. But my question is whether others think looks like a useful way to format the information. Thanks!

I added Model, Version + sorting to the datalist, because it is useless without for devices with multiple versions. 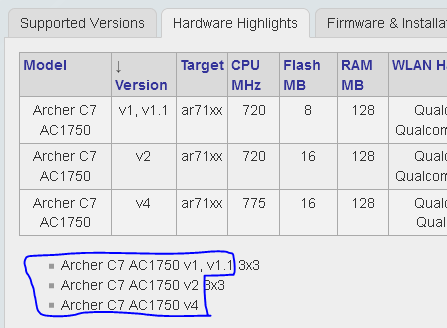 Yes, nice improvement. I wonder if there's any facility to include the comment header if its data is non-empty. That is, for each comment return:

Here's another weird thought... The sole parameter to the entire <tabbox> structure is its Model. I wonder if there might be some way add that string as a parameter in an include, like this:

so that the string after the '&' would be substituted in the obvious place in the replacement text before it's expanded within the device page.

That way, we can add a single line to a Device Page and all those specs show up

Good idea, but out of scope of the includes.

I experimented a bit with the datatemplatelist instead, because handing over a single parameter is what it currently does with the hardwaredetails.

Using datatemplatelist would result in:

Before this example I had datatables in the template_hwinfobox, but that didn't work at all ("Nothing found" in all datatables...

Good idea, but out of scope of the includes.

Drat. Nevertheless, if we did decide to place a <tabbox> in every Device Page, we'd need a script to do it.

is make the script (or the substituted text) somewhat fancier... Thanks for checking the boundaries on includes.

I already suspected an error in meta:template_hardwaredetailsheader, but that is OK.
It's much simpler:

-> All is working now on the Archer C7 page

Combining Forum links into one: Not possible as far as I know. We could of course do this manually, i.e. merge "OWrt Forum Topic URL" + "LEDE Forum Topic URL" in the dataenries into one (new) field "Forum topic URL".

Thanks, both for fixing the column names, and for the advice about combining the forum links. Let's not jump into extra work unless we really think it's needed.