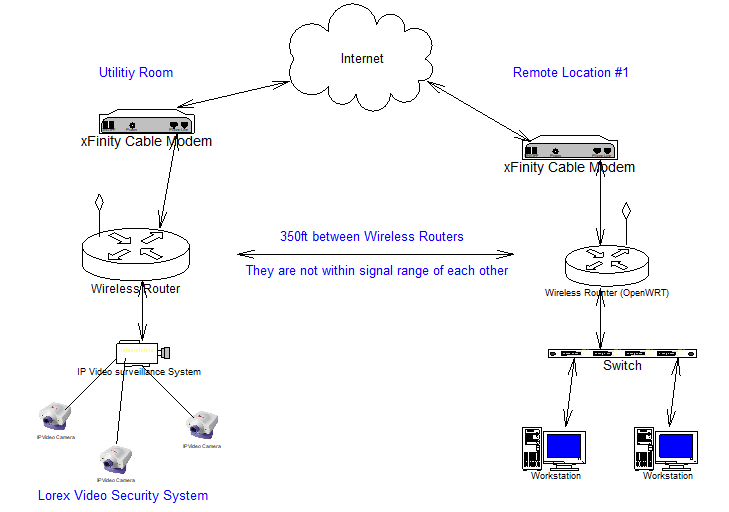 The diagram is the current hardware setup for the condominium complex where I live. There is no remote connection established between the two locations at this time. The locations are in two buildings 350 feet apart. Looking for recommendations on how best to achieve objectives.

The ideal would be create a wireless network (or bridge) between the wireless routers because that would eliminate the internet service in the utility room that only needs the internet service for the purpose of setting up access to the video surveillance system. Mounting external directional WiFi antennas is an available option if a strong WiFi connection can be established.

The other option I am aware of is to create a VPN network (Windows or OpenWRT) and link the two locations together. The concern with VPN using xFinity is that the uploads speeds are limited to about 10Mbps, which would limit video streaming to fairly low quality. High quality streaming is not a requirement, but it would be nice. Most of cameras video are pretty static images 90% of the time, so required bandwidth should not be too bad.

All advice is welcome

Running fiber optic cable is your best bet. Always use singlemode fiber as it is future proof. Multimode fiber would work but it does not support 10gb. I use lanshack.com to buy preterminated fiber. Always purchase the maximum number of fiber strands you can as you never know what you need in the future. It is way cheaper to buy extra strands now than install another cable in a few years. Call you underground locating service so they will mark the locations of underground water, sewer, electric, gas, telecommunication cables, etc. Then rent a trencher to make a slit in the ground. Make sure to go below frost depth. Your local building department can tell you that depth. Be sure to install tracer wire about 1 to 2 feet underground. This is how future locators will find your fiber to mark it so no one cute it.

Well, if an Ethernet cabling is cost prohibited then I would imagine fiber is.

Well, then you would need to figure out the running cost of separate internet service for the utility room and compare it against the cost of the outdoor antennas (which would be few hundred dollars I imagine, provided you have clear line of sight for the antennas. You would also probably need to factor the practicality of the surveillance and the weather conditions where you live.

Most of cameras video are pretty static images 90% of the time, so required bandwidth should not be too bad.

Yes, but ideally you are particularly interested in the vidoe when something is going on! You would need the bandwidth to provide good imagery of the cameras with additional 2 of them have something going on.more than the usual.

Running fiber could probably be done for less than $3,000. The fiber itself is only about $1,600 for 500 feet. Figure the cost of fiber verious an internet connection. If the internet connection is $50 a month then after 5 years the project paid for itself and you get a much more reliable and much faster connection. Plus with the extra strands you have flexibility. One pair of fiber for video and another for providing faster internet to the other building. Nrnoble might be able to convince the residents to fund their own ISP. With the buildings linked that becomes a possibility.

Antennas and feed lines are likely to be on the order of $150 per site with a short feed line, without installation and mountings. You'd also need a wireless unit that was designed for use with a standard connector for 5 GHz,

For a 350' / 100 m run, moderate gain it probably sufficient. One vendor I have worked with in the past is http://www.l-com.com/wireless-antenna-5-ghz-grid-antennas

At 5 GHz, you'll loose all your antenna's gain with "RG" feedlines. Something like LMR-400, depending on run length, would probably be more appropriate.

With an 802.11ac link between the two, I would imagine you'd be able to get 100 Mbps between the two locations. Any higher than that I'd be looking at fiber or CAT6 cabling.

The thing is, depending on the situation, the cable run distance will be greatly longer than the distance between the building (unless it will be hanged in the air, which is unlikely), and then there is the cost involving in burying the cable in the ground, and certainly some permits and paperwork.

I'm lost how the OP would do wireless, if they don't have line-of-sight, as per the image.

Also, since Fiber Optic is Ethernet cabling, I would likewise believe that it's not and option and also [more] cost prohibitive.

An option like a site-to-site VPN (using e.g. Wireguard) could work.

+1 for wireguard (WG), as low overhead. Fast, and simple to implement, as WG is especially suited for point-to-point connections.

Directed wirelesss: In case, one or two relais-stations possible, to bypass the obstacles in line-of-sight, this is another, the fastest option.

Is there a connection between the buildings available already in the utility room? Ie. maybe you could VLAN over existing wires by configuring a switch or something?

Also is there possibly an existing coaxial connection between the two buildings? You could run MoCa ethernet (ethernet over coax).

If you know for sure there is no physical cable between the two buildings of any kind then you probably want to run a wireless bridge... basically ethernet to some external location where you can mount a wireless bridge device, like something from Ubiquiti or Cambium or one of those companies. They have outdoor rated Power over Ethernet Powered externally mountable devices. The antenna is built into the device so no feed line is required, the cases are weatherproof... it's ideal for this kind of situation.

I would love to run fiber or even Ethernet, but the two buildings are separated by a parking lot; cable length would be 350ft. The budget allows spending few 100 dollars. Installing external directional antennas is within the budget, but not the cost of digging up the part of the parking lot to have a wired connection installed. The cost would be several thousand; just not going to happened.

At the moment I see it as a choice between setting up a VLAN using the existing Internet connections at the two phyical locations, vs adding external directional antennas at each location and use WiFI.

I guess I shall try a VLAN since all the hardward and internet connections are already there. If performance is unacceptable, then consider a WiFi connection using directional antennas. 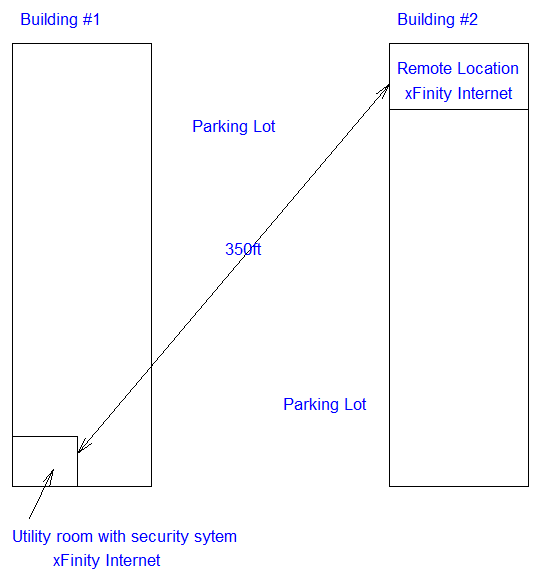 The buildings are only two stories high. Only two levels. Top of building is probably no more than 35ft. Mounting antennas would not be problem.

run some calcs on projected utilsation and add 50%.

depending on the use case, you may find downsampling and end to end compression tools squeeze you into one technology over another.

tradeoffs are often neccissary at some level when it comes to video.

I don't know how high the buildings are, or if the utility room is in the ground floor as shown. Anyway, if you end up installing the external antennas, I would suggest that you consider extending a cable vertically a bit to be clear of any trucks etc, and that could also reduce the distance a bit.

By Pythagoras, the line of sight between 2 buildings and the distance from the ultililty box to top of building#1 wouldn't exceed 300ft.

Why not install a pair of outdoor 5Ghz Bridges with builtin directional antennas on both building (assuming you have full access to dry risers to run your Ethernet cables with PoE) which is more than sufficient to cover the line of sight range?

You won't need land permits, additional antennas, no loss in antennas cables, high throughout without VPN and you could even bring internet to building#2 and retiring Xfinity at building#1.

If you have access with either or both buildings run internal Ethernet cables so that you are able to bridge the external gap between the building at the closest possible point.

Your options for bridging the two buildings are wireless or an Aerial cable suspended between the buildings.

Wireless signal quality is one point and wireless network as an additional attack vector is another.
And it's not always possible to close a potential wireless stack vulnerability fast enough.
So, VPN and especially WireGuard site-to-site setup sounds like a reasonable approach.

Isn't it possible to utilise VPN or wireguard over a wireless link ?

I would use iperf and traceroute to determine if there is a need for an extra link.
However another point of an extra link is better connectivity if we don't want to depend on the ISP.

It seems that 10Mb should handle three cameras, especially if they are H.265.

It seems that 10Mb should handle three cameras, especially if they are H.265.

even if the cameras take up 5Mbps total, it'd cut the available upstream data rate in half... not ideal.

setting up a VLAN using the existing Internet connections

We should be careful about the difference between a VLAN and a VPN. If there are cables that go from the utility room to the remote location but are currently in use for something else, they can be multiplexed using VLAN tags to carry the camera data... But if the only thing there is an uplink to an ISP, then you're at the mercy of that uplink speed and you'll want a VPN to carry the camera data securely over the internet. You might consider getting a separate ISP service specifically for the cameras.

I think your best bet would be a pair of Ubiquiti Nanostation M5s, put them on a pole on the roof or side of the buildings, and shoot the signal between them exactly along the line you draw on your diagram.

The buildings are only two stories high. Only two levels. Top of building is probably no more than 35ft. Mounting antennas would not be problem.

For starters, I am going to setup a VPN, so thanks the tips on Wireguard. At least I shall be able to remote administrate the security system and also see how good\bad the video streams over a VPN.

I like the idea of a WiFi Bridge and will continue to investigate that option. It appears to be within our budget.