I'm looking to rig a powerful (fast) OpenWRT router, and notice (from other threads) that most of the relevant boards use off-board mini-PCIe WiFi cards, and are often sold with various Compex cards. As the ToH only lists the boards/full routers, I wonder which of the Compex cards are actually expected/supported to work with current OpenWRT.

Looking at the Compex site https://www.compex.com.sg/wifi-module/ they make a number of QualComm/Atheros based boards, ranging from QCA9377 to QCA9984 (roughly). They also talk up their QualComm QSDK based OpenWRT fork for their own boards.

What isn't clear is which of these WiFi boards can actually be fully used by standard OpenWRT.

I would also need to buy a 2.4GHz card from the series of cause, so their support status would also be relevant.

(Note: Not really my first post, just the first after the forum was rebuilt).

Compex cards have beed discussed several times. https://forum.openwrt.org/search?q=compex should give you a start.

I did search, but found little, mostly old posts or short mentions of single cards in threads about other stuff (such as complete builds).

Even the dedicated Compex page is pretty short, and doesn't even list one of the device specific pages found by the search, indicating the page probably isn't up to date.

That's why I felt the need to start a new topic where those more closely familiar with the drivers could weigh in on what would make the Atheros drivers (Ath9k, Ath10k etc.) work or not with a chip/feature/board combination, and how this differs between the current and snapshot OpenWRT trees.

That they are generally intended for client use and generally only operate on a single band at a time, for me, sums it up pretty well and is one of the reasons I use discrete APs (or repurposed all-in-one devices)

All (with very few, oversized exceptions) wlan cards can only operate on a single channel at a time.

PCIe cards are generally intended for use as clients in laptops so their RF performance isn't the best. A card inside an x86 should be considered only for serving nearby users, not several rooms. The PicoStation is discontinued, and not the ideal general purpose AP since it has only a single antenna (1x1 MIMO). The round indoor UniFi APs are good as indoor use.

If you look at the Compex page I linked to, you will see that their particular cards are mostly for use in modular routers, such as those based an a PC-engines APU series x86_64 mainboard or various ARM/IPQ mainboards.

generally only operate on a single band at a time

I'm pretty sure that someone yesterday on #openwrt-devel had gotten a TP-Link EAP225 to boot OpenWrt. They're selling for $69 on Amazon (US) right now. (I haven't used one, but I believe others on the forum here have, or similar ones.)

That TP-link product seems to be a 2x2 MIMO AP, single Ethernet port, unknown CPU, comparable to a Compex WLE600VX or WLE900VX dual band card on a fairly basic board.

I am looking for something faster than that. But thanks for warning me to double check the power availability on the various mainboards, I just remembered having to do the same about 10 years ago with my first custom router build (now relegated to a minor role).

I don't believe that the WLE600VX or WLE900VX are capable of dual-band, simultaneous operation. It's been a while, but that's my recollection.

I recall the discussion on IRC indicating that it was a 16 GB flash (Edit: Yes, see below)

On the Compex cards, see, for example Best Wireless AC router for LEDE? and following.

WLE600VX and WLE900VX are dualband, but single radio, so not concurrent dual-band (meaning you need two of them, one for 2.4 GHz (yes, you can pick something cheaper here), one for 5 GHz).

Please stop your off-topic posts. This thread is about the Compex cards and their OpenWRT support, not all your opinions on why you prefer other products.

What isn't clear is which of these WiFi boards can actually be fully used by standard OpenWRT.

could weigh in on what would make the Atheros drivers (Ath9k, Ath10k etc.) work or not with a chip/feature/board combination

I know some cards that require a wiring of a USB to them, I am only cautioned because your card's webpage mentioned USB 1.1.

Please stop your off-topic posts. This thread is about the Compex cards and their OpenWRT support, not all your opinions on why you prefer other products.

I don't find his post off-topic, especially if you're seeking a card you believe will do simultaneous dual band. Further, the cards mentioned were Compex. 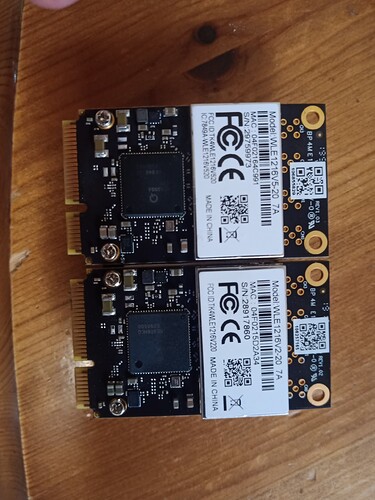 comex_cards1920×2560 278 KB
Then I tried to install them, but without success. I found some time today. I installed the last stable candidate

i have also a problem with the newest openwrt version, guess its somehow related to the kernel.
can you check if its the same problem as mine? see https://bugs.openwrt.org/index.php?do=details&task_id=3948

It seems to me that my case is different, with the mentioned board and wifi cards I did not have any problem, but I did not test the configuration with this version of OpenWrt. My problem is more with the need for a patch, see the following link
https://www.mail-archive.com/ath10k@lists.infradead.org/msg12598.html