What arch are you using, seems it isn't available for anything else but x86_64.

Package table Package categories Clicking on a package category filters the Table of Packages below accordingly, but you can of course filter it manually by yourself. Filter by category Table of packages The table below shows 50 packages per...

I'm sorry, i still haven't fully understood about the arch things. I use TL MR-3020 as a router, then i changed the OS to openwrt, then i tried to install the packages at that router.
i used openwrt-19.07.4-ramips-mt76x8-tplink_tl-mr3020.

if I remember correctly the video stuff was disabled by default because ffmpeg package often failed to compile for non-x86_64 targets. But you can use the SDK to build the missing packages.

Go to Network, Telephony, baresip, go into "bareSIP configuration" sub menu and select "Compile with FFmpeg support". You can also disable some ffmpeg packages that baresip doesn't need, to speed up the compile a bit (libffmpeg-audio-dec, libffmpeg-audio-mini, ffmpeg, ffprobe, ffserver). You can even disable the other baresip modules that you already have or won't use, this way less dependencies will get pulled in. Then exit menuconfig and confirm to save the new configuration. Then continue and compile baresip:

Then go to "bin/packages/mipsel_24kc/telephony/" and you'll find the packages there. You can copy the packages that you're missing to your router, then install them.

Alright, thanks for the information, Seb. I'll try it.

Hello, Seb. i tried to use tar xJf, but then the tar unrecognized J option.
Here is the image from the PuTTy. I tried using 'tar x' only, but the extraction seems failed and not responding. 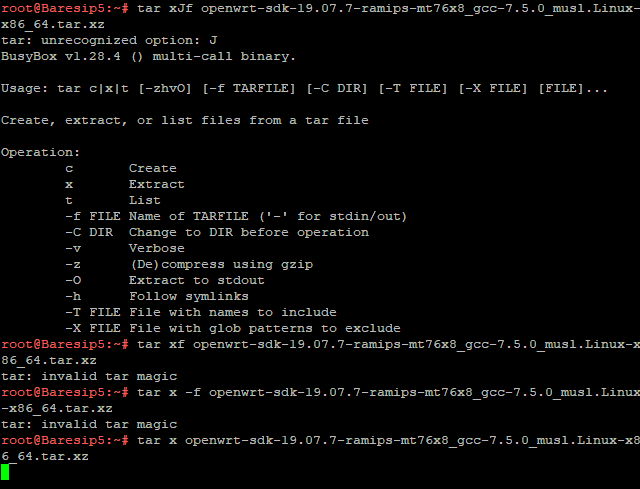 Are you doing this on a openwrt host?

Compiling is not supported there.

Yes, i'm doing this on openwrt host. So this need to be done before installing the openwrt?

You can't compile it on an openwrt host, it won't work, and it's not supported.