I want to bridge two devices only with their MAC address as this: 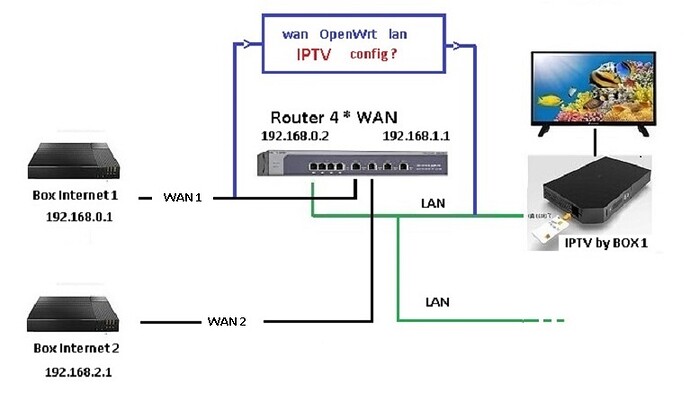 How will you bridge 2 different subnets?

For bridge the two networks I have uploaded a picture ...

yes, make a kind of tunnel only between the two devices

Are you sure it isn't using VLANs, since that is how the private network between the IPTV box(es) and ISP provided ONT or modem usually works.

Anyway you can't just put a tee in an Ethernet cable like your diagram shows.

Note: I have not external ONT it is now incorporated into the box with an SFP module

This is bridging. You cannot do that when they use addresses from different subnets.
Unless of course these two devices can run some kind of tunnel, like gre, ipip, openvpn,pptp, wireguard.

or
WireGuard ?
I have just found some infos:

Use WireGuard interface for specific devices only Network and Wireless Configuration

It is. Using "specific MAC addresses" would require putting your device back to use WAN by default and make forwarding exceptions to using the WAN. Just FYI MACs are Layer 2 (not Layer 3 which is where routing is handled after the LAN). Let's start off by saying...wireguard doesn't have the be the "default route." if you have it checked, uncheck the make routes for subnets box under the wireguard interface config your router back to use the normal WAN So...You want your router to use 2 sepa…

Have your tried installing and enabling igmpproxy on the OpenWrt box?

That's usually the issue with streaming TV from WAN.

the box & the TV box 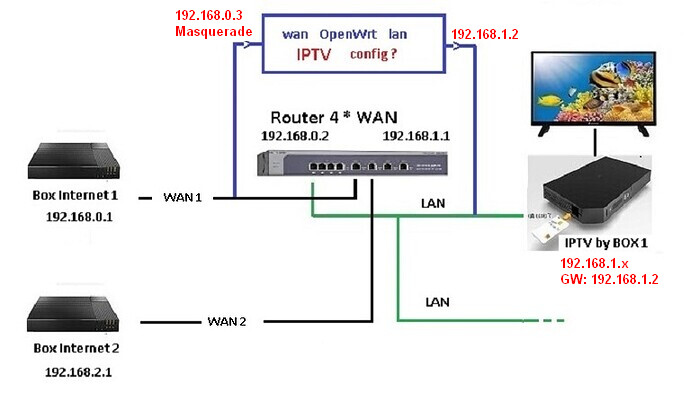 Look more closely at the diagram. The suggested alteration doesn't put the TV box in a different subnet. It sits in the same 192.168.1.x subnet, just with a different gateway (OpenWRT), that's all.

If DHCP is a requirement, then just set up a simple DHCP Reservation for the TV box and give it a different Option 3 than the rest of the DHCP clients.

I made a mistake because obviously