I won't risk bricking the router.

It will not be a permanent brick, you will just need to use a TFTP recovery to bring it back to life if it does not boot normally.

Help out an old guy...will the new released official 18.06 release be implemented into these bulds? I want to try out the wireguard implementation so can I just do an update of these or would I have to update to the official release?

If I want to go back to the official 18.06 build, can I use the sysupgrade.bin file, or do I have to do the TFTP method?

Yes, you only need tftp if the partitioning changes (so if you'd want to go back to stock or older than 18.06.0).

Hello, when I flash R7800 builds either regular or from dropbox I lose access to Arlo cameras.
Any plans to support Arlo cameras?

I'm using latest master from Hnyman, I noticed my CPU will raise every few minutes, does it normal? 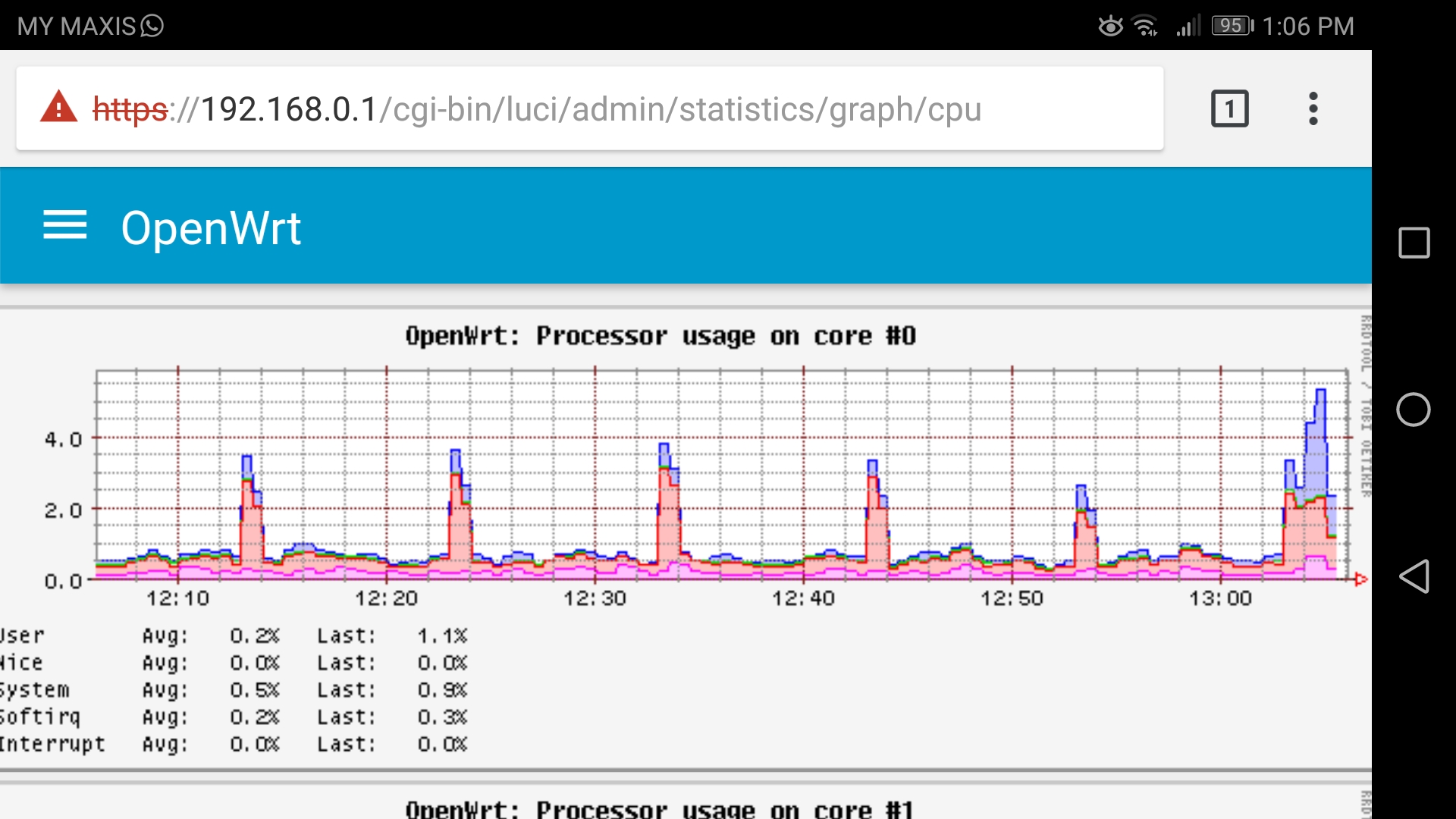 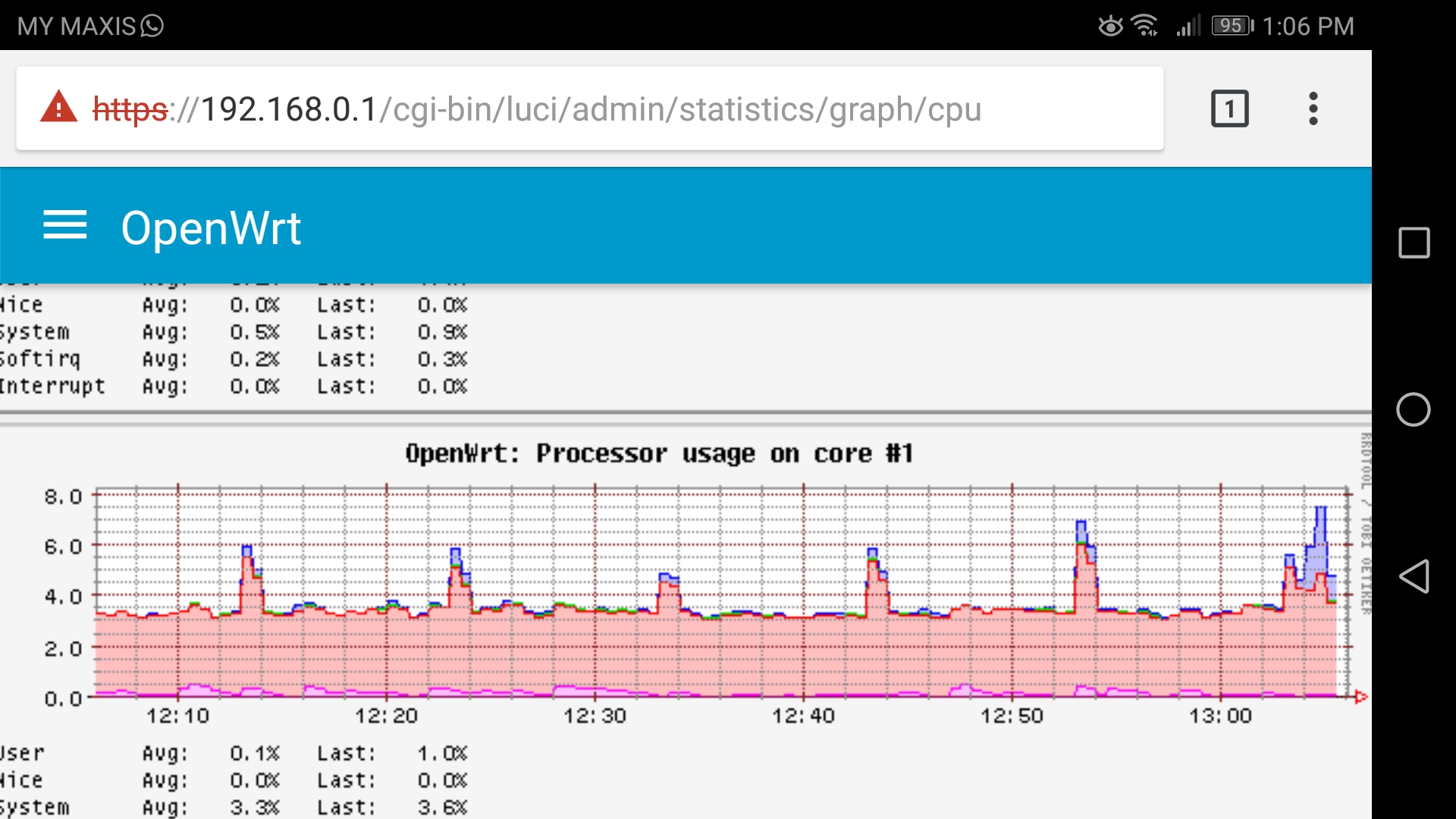 This happens for me with the "official" stable too, even when the router was just sitting there idle using all default settings. It was not even connected to the internet and had only a single client connected. So it's most likely not exclusive to this build.

The process causing the usage spikes was not shown in LUCI. I didn't investigate any further tho since I switched to my WRT3200ACM. Didn't notice similar spikes there yet, even with custom config and more clients.

do you normally reflash in such instances?

Those 1-2% percent "spikes" are likely some refresh/update every ten minutes. Ipv6 address refresh or something.

do you normally reflash in such instances?

My approach is maybe a bit different as I compile the builds myself, and flash maybe every two days, so looking at the change delta is possible.

Depends a bit on the nature of the build, e.g. how experimental / risky commits there were in the commit log. If I get a boot failure after flash, I usually try reset first, and then may recompile the build in case there was something in the build process. If reflashing that does not help, then I usually flash the previous known-to-be-good firmware to get the router back online, and start looking closer to the source code changes trying to identify possible reasons. Attaching a serial cable for debugging is also possible.

oh...well it's a bit weird, i didn't flash back to an old firmware or have to recover it. after a power-cycle it seemed to crash on first boot, and then it came up successfully with the new firmware and with my settings still intact.

My bad, I didn't look at the scales of the image properly. In my case I was seeing much higher spikes in the load averages from 0.4 to 0.8 while the router was idle and using default configs.

Excuse me for being a novice at this, but does this look right?

Help out an old guy...will the new released official 18.06 release be implemented into these bulds? I want to try out the wireguard implementation so can I just do an update of these or would I have to update to the official release?

There is strict kernel version & options based checksumming, which in practice prevents installing kmods into private builds. So, if you want kernel modules like wireguard that are not in my build, you need to use the official releases. (The downloadable release modules might be compatible with my build, but that is not sure. )

Thanks. If I am on your 18.06 build can I just do an official sysupgrade in Luci or does it require a full tftp/reset install ?

What is the difference between the master build, and the owrt build? Can I sysupgrade from owrt to master?
Thanks.

What is the difference between the master build, and the owrt build? Can I sysupgrade from owrt to master?

Master is the newest code in master branch, while Openwrt 18.06 build is from the stable 18.06 branch that was branched off from master two months ago. Not much practical difference at the moment. 18.06 will remain more static, but as development goes on, master will go ahead and there will start to be differences.

Currently you can sysupgrade between master and 18.06.

This build seems to be missing from your DropBox dir hnyman, although the others are up. Did it not build ?

missing from your DropBox

I just forgot to copy it.