How frequent are the ath10k version updates?

The main build is the current default ath10k-ct, which I build much more often.

I reach 970Mbit/s on an older hnyman build with SFE enabled. But then, my 5ghz band is turned off.

How frequent are the ath10k version updates?

Ps.
both the ath10k-ct and mainline ath10k builds from today contains the fix for the bugs in the new dnsmasq 2.83, as discussed in

Probably you're right.
Because now I tested the NAT throughput of the router with two PCs (without ISP), and although I measured different values between 680MBits/s to 910MBit/s, but this values just depend on which network interfaces (adapters) are used and in which direction. So the router is able to transfer (NAT) in both direction at a minimum speed of 910MBit/s.
I don't know exactly why I measured about 950Mbit/s directly with ISP's router (and significantly less with my router) every time... But my router (and the firmware) works well.

I think, I make my ISP switch their ONT device to bridge mode (with PPPoE), maybe it improves the speed. Currently, I use it in router mode with DMZ.

P.S.
While I tested the router with this owrt1907 build, I found a minor issue:
If I open a lots of TCP/UDP connections (200-300) and then click on the Realtime Graphs/Connections tab in the router's web UI, it will not be able to display the connections ("No information available") and will crash. To use again the web UI, I have to restart the rpcd service. (I haven't tried this with another version yet.)

Great. Thanks!
I actually switched to your build (from KONG) because of the ath10 non-ct version.
I'm pretty sure my WiFi for iOS devices is wrecked because of the ct driver issues.
Anyway, working great so far. Thanks for all your work!

Or does that only apply to cutting-edge "master" builds?

None of my build use the "performance" governor by default. All use the default "ondemand" governor.

I have slightly tweaked the scaling ramp up percents for ondemand in master and in 19.07. (I have a 200 Mbit/s connection, so I do not need to run at the router at the full speed all the time.)

The scaling governor settings can be tailored by users themselves via scripts, so if you have a gigabit connection, just adjust the settings as you wish.

If not, is it present in "master" version of your build?

Yes. My 19.07 build from yesterday contains the dnsmasq fix, (as can easily be seen from the commit hash and OpenWrt source repo)

I am in the process of deciding which firmware to use for my recently purchased R7800. I am not an expert in the field but I understand that you have done a hell lot of work on building a nice FW for this router - and I really appreciate your work.

One of the main benefits I am looking for is the reduction of the bufferbloat, so I will probably have to stick with OpenWRT instead of other builds (Kong, DD-WRT, original).

You will probably direct me to other posts in this forum to read about performance etc, but I was wondering why have you chosen the ath10k-CT firmware as the "main" one for your builds? From several posts I understand that wireless performance is materially impacted with this vs the "old" ath10k firmware (which I understand is still regularly updated too (?)).

I was wondering why have you chosen the ath10k-CT firmware as the "main" one for your builds?

It is the current OpenWrt default

FWIW I'm using hnyman's stable 19.07 for my parents' low-tier Crapcast connection (100mbps down, 5mbps up), and I was able to significantly reduce bufferbloat by using SQM with "cake/piece of cake" setting. IIRC I actually took it from grade F to grade A/B variation according to DSL reports.

Remember that software acceleration has to be DISABLED for SQM to work.

For higher-speed SQM you'll have to deal with less stable NSS firmware by ACWifiDude, and you'll have to use NSS-accelerated fqcodel SQM there which currently can only be configured via command-line/file editing, not via UI.

Software acceleration has to be disabled for that one as well, because it is currently interfering with hardware acceleration, which brings greater benefits and is enabled by default. At least, that's what the posts suggest: https://forum.openwrt.org/t/ipq806x-nss-build-netgear-r7800-tp-link-c2600-linksys-ea8500/

It is the current OpenWrt default

I guess there isn't any way to swap the ct firmware to the standard ath10k in your build, is there?. I tried this and kmod-ath10k fails to install either via cli or via luci. 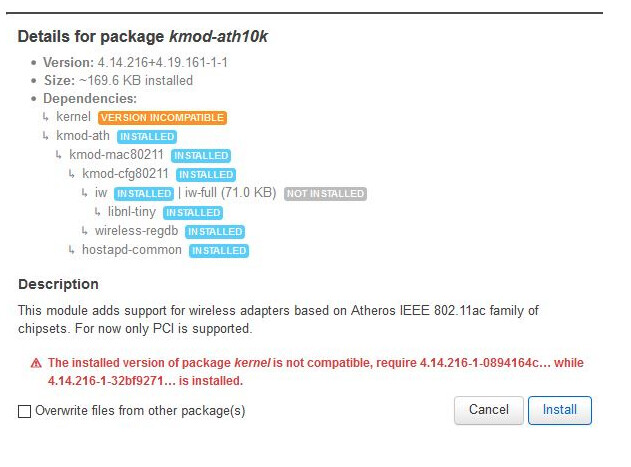 The same happened when I tried to re-install the kmod-ath10k-ct. It appears that your build is tied to specific packages (?). Not sure about that.

Not sure if it takes a lot of your time, but it would be ideal if a 4th firmware variation for "stable openwrt-19.07 with old mainline ath10k" existed.

It appears that your build is tied to specific packages (?). Not sure about that.

All kmods are tied to the exact kernel options/selections during their compilation. It is not possible in practice to install buildbot kmods to private builds.

it would be ideal if a 4th firmware variation for "stable openwrt-19.07 with old mainline ath10k"

I am not going to do that.
But if you want to compile it by yourself, you can pretty easily copy & apply my build settings & patches and compile your own firmware based otherwise on my stuff but with that mainline ath10k driver selected. Read message #2 in this thread.

I am not going to do that.
But if you want to compile it by yourself, you can pretty easily copy & apply my build settings & patches and compile your own firmware based otherwise on my stuff but with that mainline ath10k driver selected. Read message #2 in this thread.

yeah, I just asked because I do not want to re-invent the wheel... I am novice in the field.
But anyway thanks for the guidance. I hope until retirement to have learned how to do it myself

@hnyman Know anything about this?
ERROR: package/network/utils/iwinfo failed to build.

My current code contains no patches for iwinfo.

You probably have old leftovers from the time 1-2 months ago, when the "wifi channel analysis" was experimental, and not yet in upstream OpenWrt.
(probably two patches for rpcd, two for iwinfo)
Just remove those offending patches

Thanks, I was under the impression that git handles the updating pretty well. I sometimes restart the build tree but that's usually because of other issues.

I was under the impression that git handles the updating pretty well.

Not this time, as the final upstream changes were not done to the OpenWrt main code (where the test-time patches were in my build), but instead the changes were made directly to the upstream iwinfo and rpcd sources, which are in separate git repos and are handled like any other external source package.

Just had my first exeriences with building my own OpenWrt Software and used your scripts. It worked very well. Thank you very much.

I have just 1 question:

Isn't that a non-ct version or did I understand something wrong?