I believe it is because Luci ssl is using openssl.

Wrong. Luci-ssl used to default to mbedssl, and now defaults to wolfssl (in master).

When Luci uses WolfSSL hynman will probably transition to WolfSSL

No such plans.
Openssl is intentional choice, as my build includes packages that only support SSL via openssl. (I removed vsftpd from the build but it was also such package).

LuCI itself has no knowledge of the underlying SSL library. Library is accessed via ustreamssl wrapper, that provides compatibility with supported library.

When wolfssl was due to WPA3 added to OpenWrt defaults to a few months ago, Luci-ssl was left with mbedssl, which caused casual users to have both in firmware. That's why I wanted to make sure that wolfssl is used also by LuCI. (Note that my own build uses only openssl)

is wolfssl known to be problematic?

No idea. I have never used it.

According to very recent discussions on IRC, wolfssl is probably not getting installed by default anymore (and for 20.xy.z), as it seems to be very buggy in combination with ustream-ssl (thereby affecting luci over https, both in terms of forward (certificate-) compatibility coming from mbedtls and reliability/ timeouts).

Hi everybody I'm really new to openwrt, just bought and tried an used r7800 with stock netgear firmware. This is my first post. I have a gigabit connection and r7800 is connected to the ISP modem (fastweb, for italians). My network has about 10 cable connection - I have an unmanaged switch - and some wifi clients, smartphones and tablet.
With stock firmware everithing seems good, except 2.4GHz wifi that is very slow, while 5GHz reach 350Mbit.
Now, I would like to start learning and improving what I can do: my final goal should be install on the router a VPN client and force everything to pass inside that tunnel. To do that, have you suggestion from where to start? Standard openwrt and then try a custom build? I have seen that this is a long thread and there are some problems, I just need some advices like where to start and which are the first things to do, based on you best practices (for example, using dnsMasq?). Thanks a lot for everything!!!1

This thread is about my build, not about generic R7800 discussion (for which there are other threads...)

So, the advice here is that you might try my R7800 community build, which has pretty decent features tailored for R7800. Download links in the first message. Start with the default config and slowly learn your way around OpenWrt.

FWIW, I found that generating my own SSL certificate and importing my own CA into Chrome fixed a lot of these SSL issues and I don't get the warnings from the browser anymore. This is what I used: https://github.com/FiloSottile/mkcert 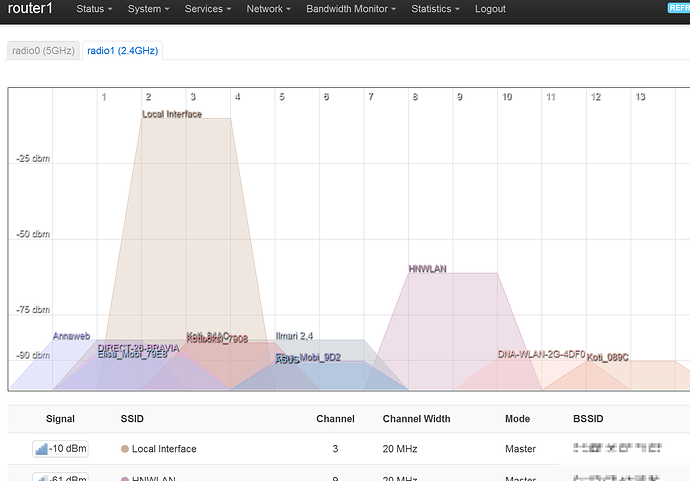 Im on the latest stable and noticed this in my log,,,,,happen the last two days...anything I need to do?

You might find better answers in nlbwmon specific threads, but I think that it is something temporary related to service launch order during your last boot.

I have a vague recollection seeing something similar in some discussion once or twice during the last few years.

You might try restarting the nlbwmon service, or even reboot the router.

Great job on the R7800 support! Does anyone know if there is a current DSA enabled build? From the core OpenWRT page on DSA it seems like the target isn't enabled for the QCA?

I believe @hnyman had a build at one point with it enabled which I ran until I accidentally nuked my config and had to re-install.

my build used to use DSA but since i switched to NSS i had to go back to swconfig.

this is my non-NSS branch, note that i never actually built and ran it on this commit as this was a preparatory merge before including the NSS changes: https://github.com/facboy/openwrt/commits/hnyman-ct

Starting slightly before master-r15151 at least for me 5GHz stopped working (channel 64) with the following EM:

I just built a new image based on the current master, and it's more than twice the size (~70MB) than the image I built 2 months ago (~30MB). Same config / same packages. Any idea on how that is possible? I think the kernel update alone can't possibly be responsible for an increase of this magnitude!?

twice the size (~70MB) than the image I built 2 months ago (~30MB). Same config / same packages. Any idea on how that is possible?

No idea, and you are quite clearly not talking about my build (which this thread is about).

The size of my build is about 10 MB. And there has been no recent change in size. I last compiled it two days ago.

I suggest that you start from a clean .config and rebuild the config, or preferebly use just a short .config recipe like I do. (Full .config can get accidentally large due to dependency changes. But I do not recall recent dependency changes that would trigger that kind of changes)

I'm not talking about your exact build, but I use your build as a base and then select more packages as I need them. So I thought that you might have some insight about an increase of that base image size. Thanks for your suggestion!

I just built a new image based on the current master, and it's more than twice the size (~70MB) than the image I built 2 months ago (~30MB). Same config / same packages.

do you have samba4 inside?
it is the only package that created me this sort of problems.. it is somehow related to build debug information, there is a specific option in the menuconfig to disable this

Yes, I have the samba4-client package selected. But there are no options on that package that allow any kind of configuration. So, do you refer to some global debug options? There are many, so it would be nice to know the specific ones you disabled.