On the BT Homehub 5A next to the USB socket, there is a USB power bus switch IC, designated as U5 (see photo). The chip is identified as L510C VS08, but this is an undocumented device via the usual online resources.

Anyone know, if implemented, the GPIO that toggles the USB power bus off-on?

There also appears to be some kind of current limiting resistor [programming] network associated with U5. Am I right in suspecting this? I note the HH5A reboots if the USB bus goes into an over current state. So is the reboot behaviour implemented in firmware or hardware? 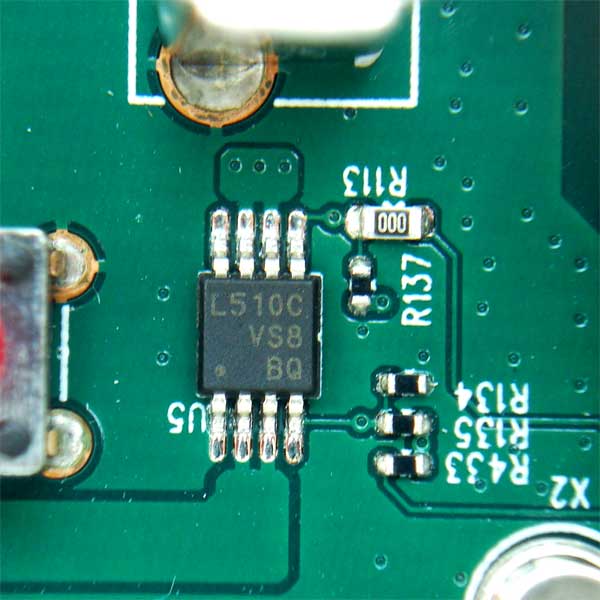 Not too many 8-pin USB power switches out there. From a search on Digikey, one might be probably isn't

No guarantee at all that the pinout or specs are similar.

Edit: In looking at the circuit board above, it doesn't look that they are pin-compatible. The TI part, if installed there, would be shorting D+ and D-, as well as current sense and current limit.

So is the reboot behaviour implemented in firmware or hardware?

Another possibility is that it isn't intentionally "implemented" in hardware, but that the load on the power supply pulls the voltage low enough to cause the SoC or other chip to unexpectedly "fail". It might be that the "wall wart" is undersized for the load (or might be the unfortunate case that it is an on-board supply reaching its limit). In either event, one possible approach would be an inexpensive, powered USB hub.

On the BT Homehub 5A next to the USB socket, there is a USB power bus switch IC, designated as U5 (see photo). The chip is identified as L510C VS08, but this is an undocumented device via the usual online resources.

@pepe2k Thank you for solving the mystery!
The datasheet confirms the maximum supply current for a HH5A is 1 amp. Which is enough for a single pen drive, which it was designed for. Knowing how the pins behave, I can research how they're implemented.

@jeff And thanks for looking. The datasheet suggests the 5V output line is ideally decoupled with a 150uF capacitor, to prevent OCB 'faulting' when hot plugging the USB port. I've not got a PCB here just now, but I do not recall seeing such a component; it's there or someone thought tantalums are too expensive! The OCB pin(5) is possibly pulled up by R137 with the output going through the link at R113 - maybe to some reset logic elesewhere? By possibly, I will have to check that R113 is connected to pin 5 and that it's not just a very tight PCB layout of non-connected components.