why do I get "error: Network device is not present"? thanks!

By default it will use VDSL aka dsl0 (resp. dsl0.101 in your case) as WAN while you likely want to use the dedicated regular WAN Ethernet port, right? That one would be eth0.2 if I recall correctly.

That one would be eth0.2 if I recall correctly.

ok thanks, so I need to use the 'Add new interface...' and follow my nose?

ooh ooh, this config appears to be working lol! 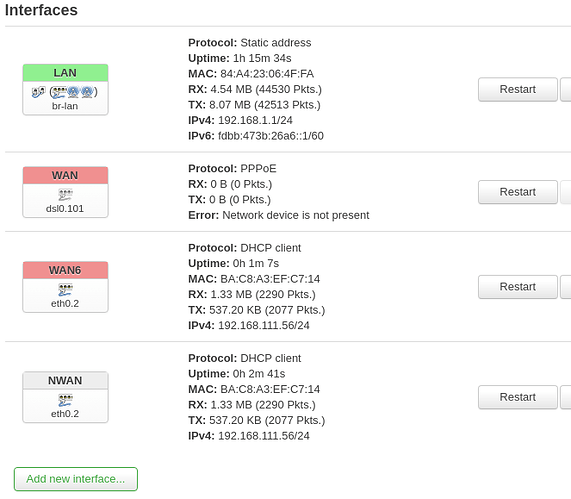 ok thanks, so I need to use the 'Add new interface...' and follow my nose?

Yeah, I'm sorry. I would at least have a lab device around somewhere in my huge pile which worst case I could resurrect if you run into any serious trouble getting it to work though. I do remember that I once tested such usecase quite a while ago

ooh ooh, this config appears to be working lol!

Now try migrating that to 21.02.0-rc3 with DSA. If you get that to work then you are a real pro and deserve the

I need to get the DSL part working on an Orange France VDSL line then I might be brave and try and upgrade it.....keep your fingers crossed!

Many thanks for your prompt assistance, good stuff!

I lately migrated my work switch to a Realtek one running OpenWrt with DSA and once I figured out how to do all the VLAN stuff it actually works like a charm. Definitely good stuff!

I lately migrated my work switch to a Realtek one

what did you buy out of interest? I'm always fascinated by new stuff and it was spotting the PI compute 4 module with an 'IOT carrier board' that got me looking into openwrt......those boards are like rocking horse poo in Europe so I got a cheap box sent over from UK to have a play lol

what did you buy out of interest?

lantiq has just been migrated from swconfig to dsa in master under three weeks ago, in openwrt-21.02 it's still swconfig based.

what does that mean in English? lol

what does that mean in English?

Let me try to explain...

That refers to the chipset aka system on chip SoC vendor used for that device. Lantiq got bought by Intel and later sold to MaxLinear to be precise.

That refers to the former resp. older switching framework used in OpenWrt. As it did not get accepted upstream it will be obsolete sooner than later.

That refers to the distributed switch architecture which is the upstream easy to handle switching.

That refers to the git branch on which latest development happens.

That's the upcoming stable release which already saw 3 release candidates. As for swconfig vs. DSA in 21.02 that is pretty much dependent on a particular target.