hi. last firmware i tried to flash was a tomato version by shibby, before that i had openwrt. it went bad, i managed to access CFE using serial and tried to tftp a dd wrt firmware and then a buffalo stock firmware. it was transfered ok, but i got error code -4 I/O, then tried erasing nvram, but i think i bricked it for good now. i no longer see output from the serial interface of the router. tried 30 30 30 reset, nothing. eth0 interface is not pingable anymore either. below is a picture of the router. to the right, i soldered headers for what it appears to be the jtag, so i can connect dupont wires and do stuff if needed. before that, any idea how to proceed? i didnt find any info on jtag for this model. any help would be appreciated. 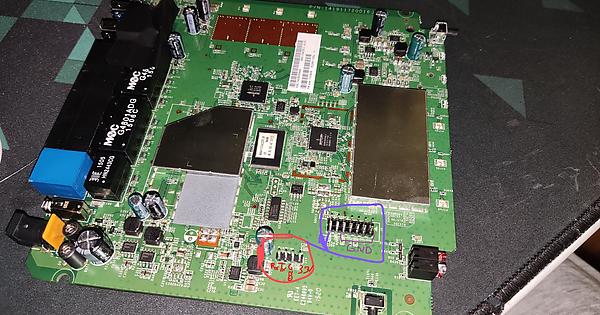 i think when you say "tried erasing nvram" you erased the flash from u-boot.

the symptoms you're describing are the same as mine when i've done that,.

if that is what you did, then i think you're right it may be difficult to recover.

i have never tried to revive the device after that. i just assumed it was bricked. i wonder if there is a way to recover.

do you still have yours? its time to revive!
i have yet to identify the jtag pinout, but to answer your question, i dont remember which cmd erased the bootload. want to fix this so badly, i just want dd wrt back ^^

careful about using the D-word on these forums.

you may get less help hahahaha. edit your post!! quick!

why, i didnt promote it or said anything bad about openwrt. in fact, openwrt is more powerful, just too complicated/everwhelming to me ^^