So here is a small pictogramm:

Create a separate VLAN, assign it to a custom firewall zone and allow only specific traffic to forward from that zone to the WAN.

It should be similar to the following:

Just skip the wireless part and assign your guest VLAN interface to the guest network.

Is it possible to still communicate with the other devices on the LAN?

Add firewall forwardings between the LAN and guest zones.

I've called the VLAN "LAN_SECURE" as you can see on the picture (interface). I've given it a new subnet 192.168.179.0 (is this necessary?).
Now I've added new traffic rules but I cannot connect to the device in LAN_Secure.
Am I missing some routing issue? Does the gateway need to be changed (now it's not filled out and gray).

What do you mean by "I cannot connect" exactly? How are you trying to connect? And from where?

Ok, I need to correct myself. The device did not get an IP address. The status page lied to me

It was from a former attempt.

@eduperez: I'm trying to connect from LAN and ssh into the device 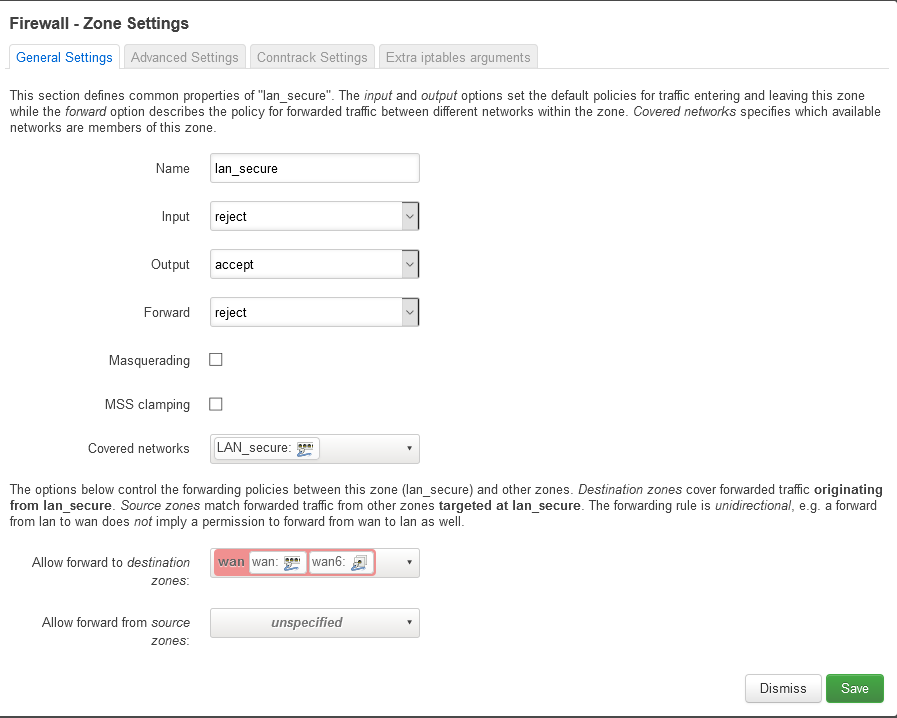 I'm trying to connect from LAN and ssh into the device

The device did not get an IP address.

Because you have INPUT set to REJECT, it cannot receive DHCP requests.

The device did not get an IP address.

Fix this first, everything else comes later.

Repeat the guest Wi-Fi instructions, specifically the firewall part.
It should create a separate zone as well as the necessary rules for DNS and DHCP.
Make sure your guest network is assigned to the guest firewall zone.