What are you talking about??

I ask you if there is enough disk space for OpenWRT in normal use and how the WiFi is doing, if it is stable and performing.

I ask you if there is enough disk space for OpenWRT in normal use and how the WiFi is doing, if it is stable and performing.

Another vote the R7800... it just works/rock solid stability.

I agree with @moeller0 there really isn't an all in one that's entirely suited to keep up with 1Gb ISP. Consider a main router running strictly wired, and one or more APs for wifi. Ideally the main router would be an x86, but you can keep using your 3200 there and have generally enough CPU.

I'm currently running a Linksys WRT1200, actually happy with it, but decided to switch to a bigger device with 4 antennas and better wifi coverage. So the WRT3200ACM was my first choice, but now not sure after reading about all the wifi issues and also the missing WPA3 (which I didn't need yet).
There have been other threads about the WRT3200 being a good choice or not:

https://forum.openwrt.org/t/linksys-wrt-3200-acm-router/50700
..I followed this one one month before and wanted to reply but then the thread was closed.

About the R7800 there was said in the other thread, that the wired performance is questionable.

I need all the features:
Main Access Point for around 10 devices in the home, 2,4GHz and 5GHz, wired router for 1000base ethernet, VPN Gateway (lower bandwidth of about 100MBit for WAN) but not sure which type of VPN I'll run, maybe later running some network services like Webdav, NAS, ZNC...

The Netgear R7800 and the ZyXEL NBG6817 seem to be the best alternatives, if not choosing the WRT3200AM which is still not a bad decision in some cases. So if both the Netgear and the ZyXEL are based on the same QCA IPQ8065 design (SOC and QCA9984 wlan), what differences are there?

I definitely preferred the Linksys WRT???? series look and stackable casing over all the others, also being a strong casing for mobile use. But this only being a matter of taste, the functionality should be more important.

This one comes with an older/ slower SOC (ipq8064 vs ipq8065) compared to the r7800/ nbg6817, both CPU speeds and wireless chipset have been improved since. As another drawback the ea8500 is only using a single CPU port to the switch, while all others use a dedicated CPU port for WAN and LAN (so two). Unless you find it very cheap, I'd go with the more current options.

Not supported by OpenWrt - and not very likely to gain support in the future (exotic SOC, with very little mainline support). 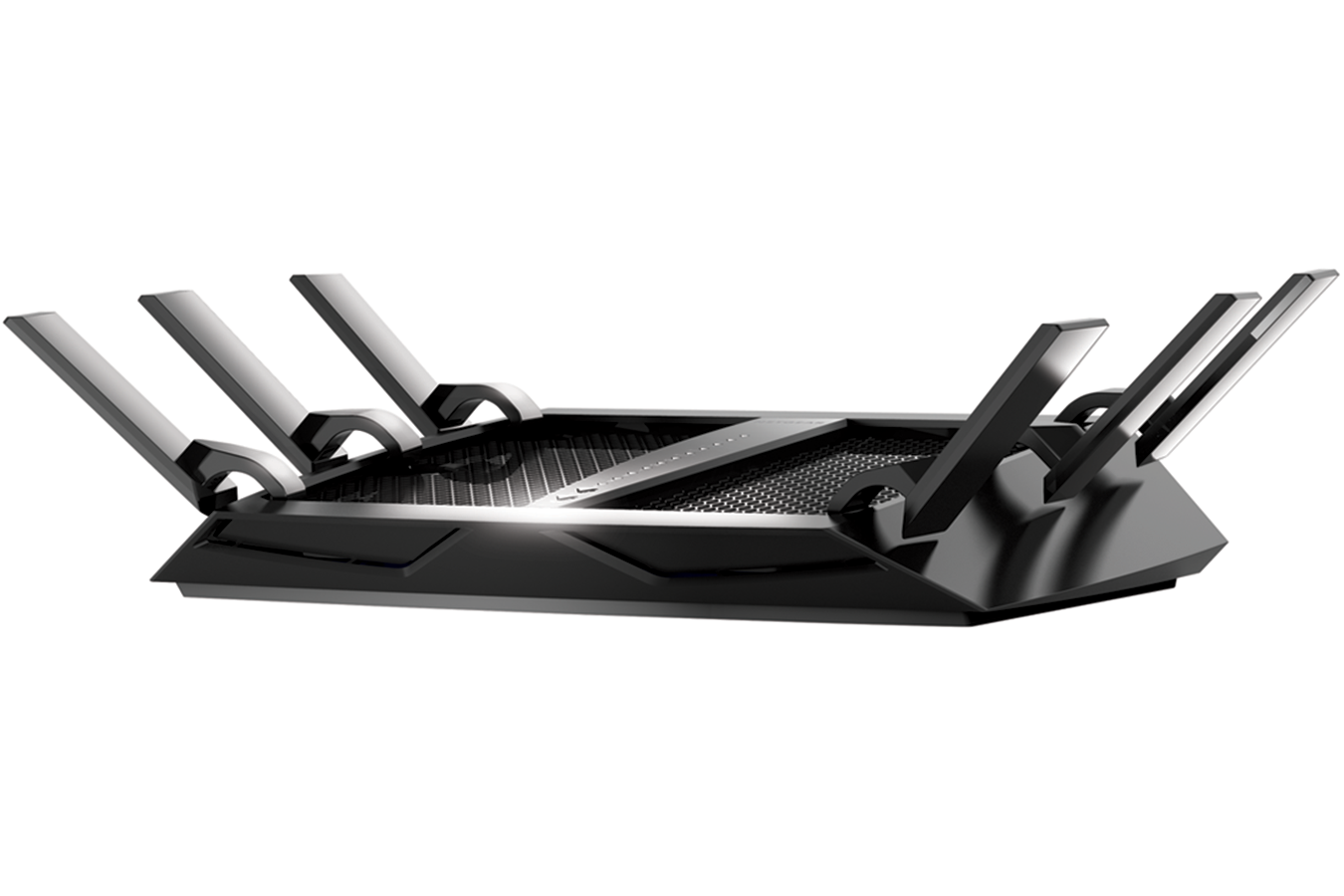 There's never been WiFi like it. The Nighthawk X6 AC3200 Router with breakthrough Tri-Band WiFi technology was built to connect to each and every device in your home—automatically and simultaneously. Laptops, tablets, phones, TVs, game consoles,...

But I read this on project page: Devices with Broadcom WiFi chipsets have **limited OpenWrt supportability** (due to limited FLOSS driver availability for Broadcom chips). Consider this when chosing a device to buy, or when deciding to flash OpenWrt on your device because it is listed as supported. See [Broadcom WiFi](https://openwrt.org/meta/infobox/broadcom_wifi) for details.
https://openwrt.org/toh/hwdata/netgear/netgear_r8000

This is a General warning for devices with Broadcom.

The warning about Broadcom wireless chipsets is correct, but the r8000 is a special case - as it's one of the very few routers with brcmfmac (mainline) supported wireless.

So I'm understanding that the R8000 is a better option (meaning faster Wifi) than the previous R7800 although it has half the RAM?

Actually, the more I read, the less convinced I am for both. r7800 seems lacking as CPU and I understand that it handles maximum up to 700 Mb / s WAN <-> LAN. r8000 has a non-open chip. I am increasingly oriented towards a 64-bit AMD quad core. It won't perform very well, but it will be better than these supermarket routers.

This one comes with an older/ slower SOC (ipq8064 vs ipq8065) compared to the r7800/ nbg6817, both CPU speeds and wireless chipset have been improved since. As another drawback the ea8500 is only using a single CPU port to the switch, while all others use a dedicated CPU port for WAN and LAN (so two).

Thanks, but this sounds like the R7800 is also the better choice for my plan to do all the Ethernet-Routing of my 1000base switch through this OpenWRT device. So what does @neheb mean in the previous message that the Ethernet is the drawback?

As I will also have a small server (amd64, low-power AMD Embedded G-Series based, 4GB Ram) with real Linux, I was not sure if I do the routing there. It would definitely have more freedom and provide more flexibility. But I planned to have basic important features like routing, firewall and VPN on a small device that is guaranteed to be online always, while that server will be more kind of a work in progress, sometimes rebooting for new kernels and stuff, maybe offline in vacation. I also like to reduce the total count of 24/7 machines to reduce the power footprint.

Some other specific question that could be affecting my next device choice: I tried to create a link aggregation with tagged VLAN on the Linksys WRT1200. While the kernel was able to do that I realized that the switch of that device was not capable. I tried long while discussing with experts on #openwrt@freenode and gave up finally.
When routing all 1000base communication via that OpenWRT, it would be nice to have it connected with 2GBit instead of 1GBit, bonding/aggregating 2 ethernet ports to one VLAN tagged virtual device. All networks to be routed I would tag on the switch. Are there devices better equipped for such things?

That R8000 sounds also a good choice and well enough supported, though a bit older than the (still preferred) R7800. But that R8000 looks like the antennas are not that easy to replace like the RP-SMA sockets of the other devices?

If you're looking for routing a 1 GBit/s WAN, even more so with link aggregation, the r7800 is not an option, read up the details at:

For using OpenWrt, the ipq806x target isn't quite capable to route at 1 GBit/s linespeed - it should do more than 100 MBit/s (depending on your expectations for latencies probably between 350-400 MBit/s up to ~600-650 MBit/s, with software flow-offloading enabled), but 1 GBit/s is a bit above its abilities (you would need mvebu or x86_64 for that, perhaps ipq8074 in the future). Especially with 1+ GBit/s fibre connections, you're quickly leaving the prosumer space and are fairly far into enterpr…

Without having a performance reference for the r8000, I would seriously doubt that it can cope with that either. It was released in friggin' 2014, what do you think, how many 1 GBit/s prosumer home connections exist back then; that wasn't even on the table for commercial branch offices using 1000 quid routers.

1 GBit/s routing and above is still firmly within the enterprise domain, especially beyond that (link aggregation) you are looking at mid-end x86_64 only (intel i5/ ryzen 5 and up), combined with a good AP (this role can be fullfilled by the r7800/ nbg6817).

There’s a separate processor on that router that is able to handle network processing and achieve 1GB speeds, but there is no real driver for it. So you’re stuck with sub 1GB speeds.