Is my understanding correct? And that also explains why you still need the dedicated installer to do an UBI flash: There is no recovery-installer image directly from OpenWRT's download page, hence the need of the installer which will generate one for you.

Yes, you got it exactly right now.

Perfect! Thank you very much for the detailed explanation, and of course the installer itself

Looking forward to my new router

stock firmware accepts the non-UBI firmware image but reboots back into the stock firmware upon completion, presumably from the backup partition.

That almost sounds like the OEM firmware flash routine accepts the OpenWrt firmware, but maybe the bootloader rejects it at the next boot.

Other scenario might be that the OpenWrt boot fails three times, and then the bootloader toggles to the other partition. Those boot cycles might be visible from the LEDs.

Unfortunately I'm not set up to monitor the boot logs but watching the power LED it does seem like it tries to start up for a few seconds, then the blinking pattern is momentarily interrupted before it resumes again and the router finally boots to the stock firmware.

Sounds like OpenWrt booting and failing early on boot. Serial console output would be quite advantageous at this point.

I wasn't sure I was going to keep mine (and I'm sure Belkin wouldn't appreciate me returning a previously-disassembled unit) but maybe this would be a fun project for the holiday break... let me see if I can dig up my old Bus Pirate.

I also ordered an RT3200 yesterday.
I'm also a little nervous about flashing, but after yesterday's explanations I'm a little more relaxed and think I'll get it done.

Same here, I am ansiouxly waiting for the carrier to ring my bell.

After reading explanations, I are a bit more confident of doing it well and get it working.
But I have to keep enough calm to be sure that i have completly backed up the original firmware.

I am glad I could find this device in a sale, with so many people interested in it here its price is going to go up xD.

For people in Europe (those who do not want to bother with customs procedures), RT3200 is again available on Amazon (DE seems to have a lower price than other countries).

I have receive right now the router.

To my surprise it seems that somebody has already installed an openWRT snapthos in the router a snapshot non ubi version it seems (I have told already that it was a amazon refurbhised).

The interface is something like a mix between the original firmware and OpenWRT.

Now I am not sure on how to proceed, if I should try to install ubi, openWRT snapshot (it seems to have one snapshot installed).
It seems that I am not going to be able to return to original firmware from manufacturer and may be there are problems with wifi calibration if they have destroyed that info in the device.

What do you recommend me to do?

It seems that there are routers of this model in germany for about the same price I have paid (in other countries they are much expensive).

These are some captures: 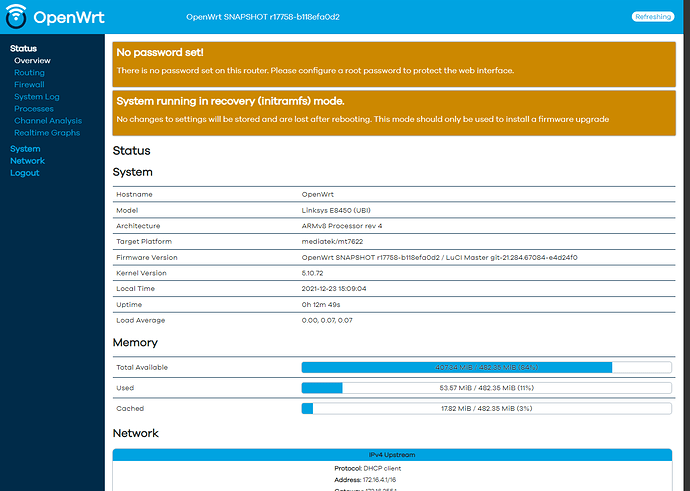 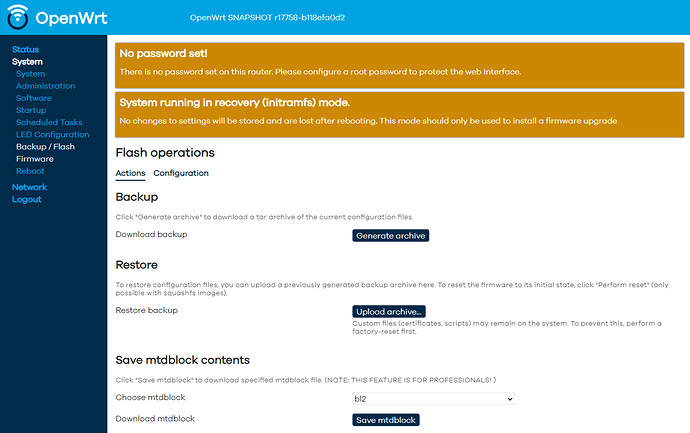 Right now I am not sure if the router has installed the ubi or non ubi openWRT snapshot.

I think It would be not possible to return to stock firmware in case I need it.

It seems that they have installed the recovery openWRT firmware in order to try to revert to stock firmware and were not able to revert.

So may be the best thing I can do is return it.

I have contacted amazon to informa about the problem and they say I have 30 days to return it, and that I can contact belkin for assistance.

That lets me the chance to try to configure it this weekend and if it does not work, or there are problems, return it on monday or tuesday.

Do I try to install the downloaded non ubi snapshot of the openWRT firmware to see if it works?

It seems there are screws under the stickers in the wings were the wifi password is written.
If you pass your finger over it and press a little, you can feel the holes where the screws are.

This is a totally unrecommended practice! The person returning a "hacked" router is one of many reasons why the vendors are locking the bootloaders... Many thumbs down to the original owner... Now you can just try a newer UBI OpenWRT (it IS UBI variant as it is shown in the interface), there is no simple way to put non-UBI OpenWRT or original firmware back.

Thanks, I will try wiith ubi version if it works.

Should I make backup of all partitions, first?

(Well. I have made it just in case, downloaded files from all four mdt blocks (bl2, fip, factory and ubi).
I suppose that would let me revert to the current state at least.)

If it works and everything is OK it is not important for me as I am going to install openWRT.

But I won't be able to revert to stock firmware or try it, or even try non ubi.

For the price, I can get one new from Germany (about same price) but it will take several days, until 29 or so.

If they tell you the truth and you buy a bargain, it is OK. But it was only about 25% discount and says in perfect state, only minor scratchees (I can see none) and box not being perfect.

Thank, I have made a download of all 4 partitions (I expect the factory is not damaged, as wifi seems to work).

I will try to install ubi. At least the router will be in a better state than now in recovery mode (if I understood well that is the mode when you burn the recovery partition in order to revert to original firmware, for example)

But I think I will return it next week, with it working if possible, as a new router costs more or least the same.

BTW: If you want to install an OpenWRT build with more packages already inside, you can try this version: https://forum.openwrt.org/t/build-ubi-for-belkin-rt3200-linksys-e8450/94569 or... build your own.

I will try, that then.

Can I install other software like wireGuard using luci interface under snapshot firmware?

I am not at the level of being able to build my own openWRT custom router firmware.

Well it seems the flashing went OK and it is working. Now I have to configure it: 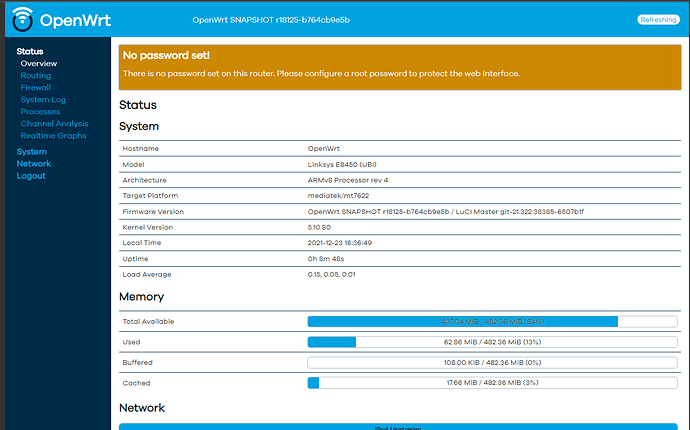 How should I do a reset in this router to get access when connection is lost?

Usually when you have lost connection to the router you reinit the router and press some key to enter put the router in save mode and access it using 192.168.1.1.

I have pressed reset button while bootin to put it in safe mode. The light is flashing quickly which indicates that it is in safe mode.

Is it on other IP when booting safemode?