Really simple question for you guys in the know...

I'm currently building snapshots on master branch for my RPi4, but would like to move to the 21.02 for stability.

Obviously I already have git cloned, so from reading the documentation on the wiki,I need to do the following...

Then do this step just the once,

Then make menuconfig as normal.

From then on, I just build as normal, not needing to repeat the git checkout bit??

Does that sound right?

after the branch a distclean help you to have a good base, then you can update/install feeds, run menuconfig and at last compile the whole thing

Then do this step just the once,

Then make menuconfig as normal.

You need to update & install feeds AFTER changing the branch and checking out the release tag. Feeds are specific to a branch.

Oh right, the wiki has it wrong then, but that's fine I can do that no worries. Thank you. 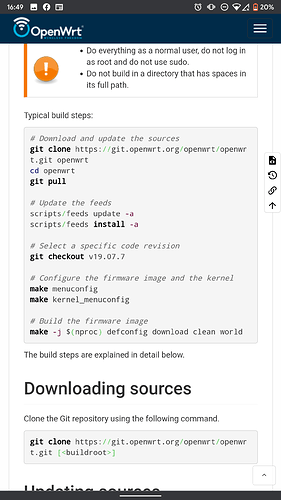 the wiki has it wrong then