A big disadvantage is now of course that the new import instead of a few minutes now partly takes 30 minutes.

30 minutes!? How many countries did you block!?

Maybe it's easier for you to use the undocumented 'ban_allowlistonly' mode where only connection permitted which are defined in your allowlist.

The country lists are actually still manageable.
Most of the time is spent on the firehol4 list, which only blocks incoming traffic.

To close everything would actually be a bit overkill

But thanks for the suggestion.

Thank you by the way for the great work you are doing here!

@dibdot just want to inform you that the tor ban list doesn't work anymore and it seems that the maintainer has stopped updating it as stated in the home page https://fissionrelays.net/. It actually stopped working in the past 2 weeks.

it only has ipv4 addresses, and the list would have to have special parsing handlers for this list.

it only has ipv4 addresses, and you would need special parsing handlers for this list.

Here is the list I use:
it is update hourly.
https://raw.githubusercontent.com/SecOps-Institute/Tor-IP-Addresses/master/tor-exit-nodes.lst

BanIP used the Dan.Me list before. What I did (before when Dan.Me was being used) was tweaked it in a way that I've got a cron downloading the list once a day (somewhere it can survive a restart) then BanIP source was mapped to process the download file so just in case you had to restart the router or banip within 30mins or less, banip will still be able to process the file with no errors.

I use the github list which is identical to dan.me. the lists maintainer uses github actions to redownload the list once an hour. The benefit is you wont have to worry about the ratelimit anymore.

Is 128MB of RAM a viable option with these optimizations - and a small IP list?

Yes.. that should have enough memory for small IP sets.

I agree with @AcidSlide, it should be enough to load a small IP list. But I encourage to fully enjoy BanIP strive for more memory.

With my RAM and use of as many IP sets as I do, my memory shows only a very small portion being used. I think the biggest challenge occurs during the process of loading those entries into memory.

Is 128MB of RAM a viable option with these optimizations - and a small IP list?

Just test it yourself ...

I have no such device, the smallest of my routers has 256 MByte RAM - and banIP works on this device with a splitsize of '1000' and a limit on one cpu core.

someone could show their banip config to give an idea?
thanks

Hi,
a few minutes ago I hopefully uploaded the last pre-release to my github account (pre4, see first post) with the following changes:

A few screenshots from the latest pre-release:
- current status: 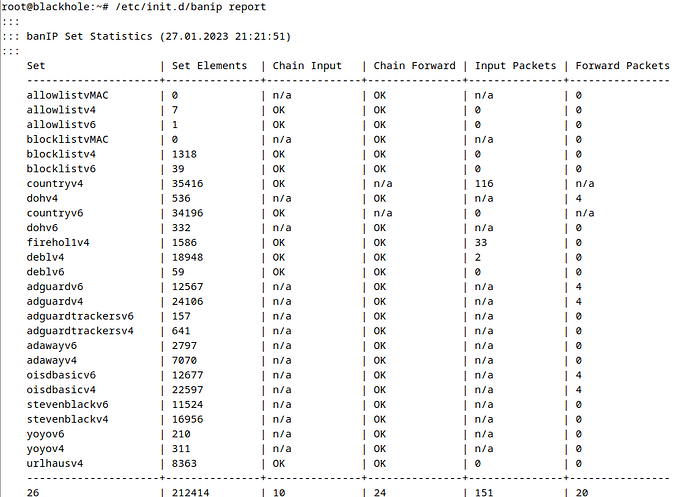 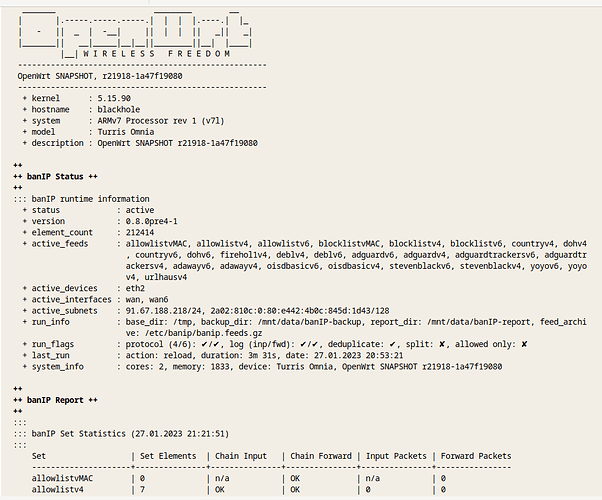 I'm a complete newbie on banip, running OpenWrt 22.03.
Just uploaded and installed banIP_0.8.0pre4 and it's not doing anything,
I'm mean it's not reacting to any command on /etc/init.d/banip status, start, stop...etc
It's just giving back nothing.
Tried to straight execute /usr/bin/banip-service.sh but's it also doing nothing.
process is not running and there is no any error at execution but also not doing anything on any command.

Am I doing something wrong ?

Did you edit config file?

Nope as I said I'm newbie. I have read through the original banip installation piece but doesn't say to edit the config file it just says install and start it it's all automatic.

Where is it ? Under /etc somewhere I guess ?

yes should be edit /etc/config /banip

then restart banip and

To be precise, the option is called ...

example of my config