Thanks so much for the help. I'll be doing all of this ASAP tomorrow morning.

I got the new Zyxel Armor Z2 up and running, I got the newest snapshot and SSH installed LuCi.
It's working very well.

Though, my main issue is actually still present. Lol. I thought it was gone, but it was just a lucky few days.

The last two days I've had random DC's again, where the entire internet cuts out for 2-5seconds at a time (just bordering on the disconnect timer in Path of Exile).

I've got no idea what it is, and I don't have any idea where to start troubleshooting.

I've had contact with my ISP 3 times now and they've said each time that there's nothing wrong that they can see. The next time I call they'll be sending a technician, and if it's my hardware or cables, I have to pay the insane bill.

Any ideas what I can do?
It's the exact same issue as the old Archer C7. So that router is probably not even dead

I tried plugging the cable directly into the PC from the wall, and the day or so I tested there was no lag/DC at all, but then again it's so random.

Other than change ISPs? (Yeah, I know)

If their tech support's first question is "Which version of Windows are you running?" there isn't much hope.

Monitoring your modem's signal levels would be helpful.

(None of this is "special" when it comes to OpenWrt.)

The thing is when I tried to go around the router, there was no problem (but that might just be because I couldn't test for more than 18 ish hours)

When I ran PingPlotter, any server that I tried to ping would just red bar completely whenever we lost connection to the game. YouTube would stop buffering and everything else of course.. Like everything just stopped.
Router? I don't know.. Doubt it could be routers twice in a row, right?
And it can't be the cable, because that wouldn't be random either, right?

Could you, now that you have two routers, put one of them after the other LAN --> WAN, so that both are actually routing, and then run this PingPlotter overnight via the client router to both the main router and an internet server. If both fails then it's an issue with the router or the cable. If pinning the main router works while pining a server doesn't then it's likely to be at the ISP side (or if it's at your side then it's likely to be with the PPPoE settings you use).

Unfortunately intermittent connectivity issues that aren't happening right now when you call the ISP are hard to debug (and you'd have to pray that it still persists when the field technician is around, or you'd have to pay for their visit), but you can still try to trace the issues to external factors (wind, rain, etc.) - maybe that helps (although that won't really give you a solution either).

which firmware did you run on dir615? how often you updated archer? sounds like software issue

So good news.
It's not any of the routers. 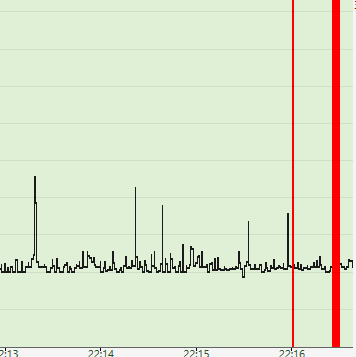 This is what just happened on a direct cable connection from the wall, PingPlotter.. and the game also froze during this time.

Anyone got ideas?
I mean at this point the ISP should really just be like "yeah, this is a problem on our end" right?
It can't be anything on my end... yeah?

Goddamnit this is frustrating...

thanks for the help so far guys.

Puma chip in your modem?

in my modem?
I dont know what you're referring to.. but there's nothing powered on the wall, it's just an ethernet plug
i'm bypassing the router right now with a direct cable to it and the packet loss is still happening

try again if it's happening with dir615. maybe it's raining and you have water in cables like we used to and stupid uneducated technicians always said everything is fine. until one winter it freeze and broke cable completely

The Puma chip used in DOCSIS modems is notorious for “lag spikes”.

right now im ok with keeping the Zyxel Armor Z2
i have the Archer C7 as a backup just in case
but yeah it must be something they broke i guess...

I'm really not sure how or where to even begin to look at what modem i'm on?
think it's not even in this apartment complex

so for the last hour there hasnt even been a single spike.. been watching youtube 4K vids, playing path of exile, nothing happening.

it's so frustrating that it's not even reproducible within any given hour or even a full day...

So you have an Ethernet cable from the wall, part of a system in the apartment house?

Whatever that cable goes to next, should be less than 100 meters away. Ethernet is intended to only travel 100 meters.

Ethernet from the wall yes, part of some kind of system i guess yeah.
I've got no idea at all, what it is though

part of some kind of system i guess yeah.

Would it make sense to ask the neighbors, if you are sharing modem, the same modem whether they have the same problem?

I think they just don't use the internet enough to notice to be honest.. it's too sporadic