Archer A7 not showing in network

Hi all, I'm new to this forum, yesterday I was tinkering with my Archer A7 router with OpenWRT 22.03.2 but without understanding the meaning I enabled the static route option as my ISP assigns me a static IP from then onwards the router though connected to PC it's not showing any sign to login to 192.168.1.1 both on Windows and Linux. Only in my Raspberry Pi it's showing an IP 169.254.234.48/16
I've even tried to factory reset the router but nothing happened is it has broken permanently? As if so I'll have to organise a second option as my houses whole network is on this router and it's just 3 months old
Do anybody has any idea what has happened wrong or what to do if possible?

Failsafe Mode, Factory Reset, and Recovery Mode OpenWrt offers several ways to “start over” with your router. * Failsafe Mode is useful if you have lost control of your device, and it has become inaccessible, perhaps through a configuration...

By following the instructions I pressed WPS botton during start and the system led started to flash fastly so I think it's the failsafe mode but telnet command is not responding though I've set the IP 192.168.1.2 and gateway as 192.168.1.1
Can I flash stock firmware without factory resetting Openwrt?

I'm getting error in telnet command 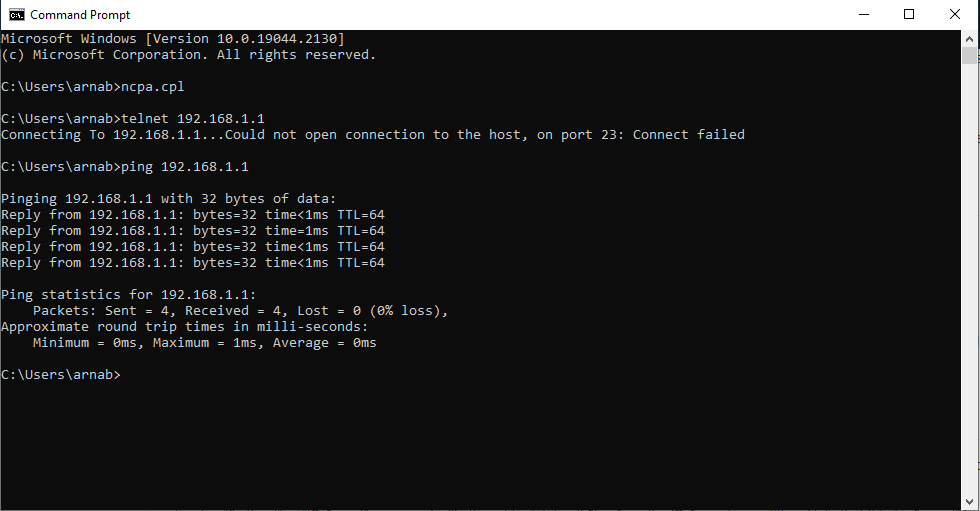 I don't know if OpenWRT supports telnet out-of-the-box.
I do always use ssh.
Maybe you can try with putty using ssh to get access.

Sir actually I've tried ssh also it's not working even tftp stock firmware flashing is also not working, I don't know if it is bricked or not

That might be the case, but maybe you're just locked out completely.
Are you able to connect a serial adapter to the router (this likely requires removing the housing and soldering of 3 wires).
On the serial console one might see if and what the router is doing after being switched on.
There you can also reset the settings you made to default.

You appear to have had ping responses when you were in failsafe mode. That is a good sign. But as noted, telnet is not supported on OpenWrt. SSH should work... try it again.

Also, just to be certain that you are attempting to connect to the correct device, run the ping test to 192.168.1.1 when you have the A7 disconnected/powered off. If you get a ping response, that means you have some other connection to another device on the network that is using that address, and that would potentially explain the inability to connect via ssh.